We just announced a new feature test for the "thank you" reaction on The Overflow blog.

We discovered that “thanks” appears in 1 of 6 comments left under answers. Although it's less common on questions, the percentage of “thanks” comments has continued to slowly increase over the last few years. 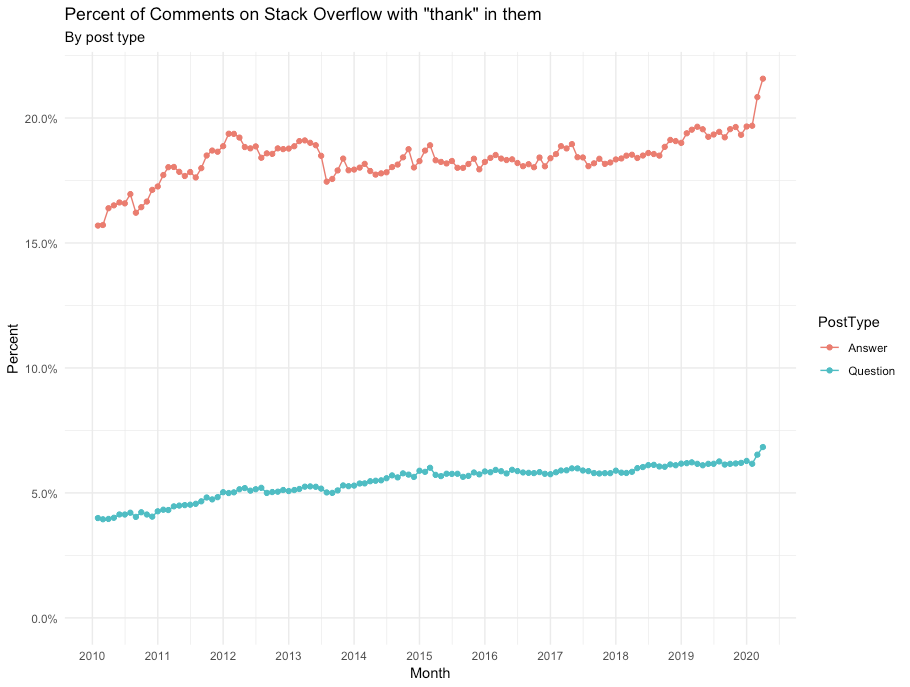 Using this data and user research, we're introducing this clutter-free way for users to just say "thanks" to others for taking the time to answer questions.

On the left of an answer post, you'll find a hands icon underneath the usual voting controls. By simply selecting the icon, you can share your thanks to the post-author. As reactions are added by users, a count of the reactions will appear below the icon.

This feature is available to all registered users, regardless of reputation (unlike voting, which is only available for users with 15 reputation or more).

We’re testing two versions of the “thank you” icon:

We hope that this test will have a positive impact on our community and reduce:

You can find more information about this in the Help Center.

We’ll be monitoring usage and other data over the next month and will use those results to inform how we may move forward with this experiment. If you run into any issues or bugs, please share them here.

Update: Please see Data validation & background for the Thank You Reaction feature test for more details on the plans for evaluating the results of this test, and for responding to the feedback given here

If (and this is a big if, pending the results of this very experiment) the reactions feature provides value by cleaning up the comments, please allow users to turn the display of reactions off in Settings. For a user who appreciates the Stack Exchange mission and focus, these reactions are an unnecessary and annoying fluff distraction.

If I don't care about reactions, it should be omitted from my view of the Timeline as well.

1. Allow Shadow Voting for All Users Under 15 Rep

If the problem is that new users (under 15 rep) can't interact / vote - solve that problem explicitly by allowing them to vote. Since there is a concern about people creating new accounts and sockpuppeting their own answers up, just allow them normal interactions and show them as having voted but don't increase the vote count or user scores.

You could even log these events and allow them to make an impact as soon as the user passes the Community Voting Threshold so early engagement is still rewarded and encouraged, just not exploitable. New users would be trained on how exactly to use the system, with their reactions just weighted appropriately.

2. Use Reaction Icons for Voting

As others have mentioned there is already a way to thank posters.... VOTE UP Questions / Answers

Hopefully, all roads would lead to rome and someone who expressed thanks should also be voting up an issue, if they have the rep (even if it only happened on the backend). Any potential increased engagement of thanking over voting is likely due to the familiarity with leaving reactions. But then we're directing users away from voting.

If you want to encourage a friendlier kind of voting, you could replace the up / down vote icons with thumbs up and thumbs down

Doesn't seem to be a good idea. I was confused about the purpose when I saw this reaction icon on answer and that brought me to this post.

As many other previous posters I also think upvote can mean "Appreciate the effort and thank you".

Here is another idea...

The only way I can see this feature to work (even though I don't like it and would rather not have it) is to make the thanks button automatically also trigger an up-vote, as people are supposed to do for questions/answers they like. This way any thanks/like action gives people their acknowledgement and reputation.

On social media in general, it has been recommended by psychological experts to comment instead of pressing 'like', as the ease and anonymity of 'liking' something leads to negative social consequences, such as malicious envy: https://www.ncbi.nlm.nih.gov/pmc/articles/PMC4710707/

With this in mind, yes, the upvote and downvote buttons can be viewed in the same fashion, but at least someone writing 'thanks' has put some effort in. It's more sincere than clicking a 'like' button, at least.

I'm ashamed to admit I was kind of excited when I saw that you could add "reactions" to an answer. My mind was dizzy with possibilities. Oh, it's literally just ONE reaction? Thanks? How is that different than an upvote?

Then I thought about it. Even if there were a bunch of reactions, what would they be and how would they be useful? Love? Funny? Meh.

I do LOVE seeing SO experiment with features like this, but this is a miss.

A lot of people seem to miss the point that new users are not allowed to vote on answers. This feature is not really to thank the author, but to provide a way for new members to feel like they are interacting with the site more.

It is basically a black-hole, to let new users feel like part of the community without anyone having to hear them. Which seems a bit... cynical.

Why don't you just let new users vote on answers and questions, but not include those votes. Same overall effect, less extra buttons to dilute the main vision of the platform.

I have to say, I think it's very slimy tactic that you have to register to 'thank' a post. It is absolutely against any positive point this feature might have brought to the site. Oh well, a golden opportunity was missed.

And this is yet again another possibly game-changing feature that hasn't been vetted with the team here. Such things are always immediately going to draw the ire of users here, especially the veteran users.

How about: don't delete "thank you" comments. Most of them take up one line of space, or are otherwise brief. A "like" button cannot convey what's said in words - we have an upvote button already.

Clarification: My intention here is not to advocate for reactions as an alternative to voting. Instead, my main point is that while there is an argument to be made for reactions, trying to combine them with voting provides a really confused user experience. They are fundamentally competing and incompatible forms of feedback.

I could imagine an argument for reactions as a more expressive alternative to voting.

Currently, upvotes and downvotes can be a somewhat ambiguous signal.

If reactions were to be pursued, the challenge would be identifying a set of globally intuitive icons that adequately capture the range of sentiments users intend to convey via voting. And then you'd need to answer questions like whether users can have multiple reactions, whether all reactions are worth the same reputation, how to aggregate reactions into a score, &c.

The problem here, however, is that this reaction is being introduced as a complement to voting, thus introducing a lot of ambiguity in terms of sentiment.

Notably, as @rene hypothesizes, this could very well reduce the amount of upvotes since, today, upvoting is the primary mechanism of saying "Thank you".

And while users could upvote and react, I'm not optimistic about that given how many contributors seem to e.g. accept answers without upvoting them, or vice versa. Or, worse yet, say "This solved my problem" in the comments, but neither upvote nor accept the answer.

The issue with score is that it indicates popularity, not necessarily quality. A oneliner of code will generally win over three paragraphs of text and no code. The problem is that the oneliner is wrong. Not "using too many CPU cycles" or "won't even run" wrong, but "is going to cause headaches when [actually quite common thing] happens" wrong.

What I hope this will achieve, is that "thanks" will stand for "usefulness", i.e. the visitor could read what was written and it helped them along, but the answer in and of itself does not necessarily deserve an upvote, because it isn't actually good.

But I guess that it'll take years to measure whether this actually realizes that.

A lot of users don't have reputation.

So, this feature is useful if and only if it is available for the 1-14 rep window users.

10
What is the say thanks for this answer inside of answer?
15
Why am I being told to thank others for their answers? - when it's my answer!
1277
Sunsetting Documentation
684
The Ask Question Wizard is Live!
317
What can we do to encourage downvoting?
521
Triage needs to be fixed urgently, and users need to be notified upon receiving a review ban!
379
Threshold experiment results: closing, editing and reopening all become more effective
230
Why do you stay?
207
Should moderators run automated bots under their accounts?
176
How can we stop failing the users who we actually want to join, and remain as, members of our community?
See more linked questions

36
What is the '100' reaction supposed to mean?
4
Can I search for questions that I previously "thanked"? And is my "thank" therefore public?
29
Was there a community requirement to have reaction feature so "instead of clicking on like, you can just say 'thanks'"?
29
The "Thanks" feature may be encouraging "Thanks" comments
38
Some crazy ideas that might help voting and make the "Thank you" reaction redundant
80
Ask Wizard for New Users Feature Test is complete