I would like to suggest that if a post receives even a single delete vote in the Low Quality Posts review queue, that any outstanding review in either the First Posts or Late Answers queues should be invalidated at that point to prevent unnecessary reviewer effort.

When reviewing answers in First Posts (FP), it's not uncommon to come across Not An Answer (NAA) answers which have already been flagged elsewhere, so are in the Low Quality Posts (LQP) review queue, and have already received delete votes in LQP.

An example from today is this answer: 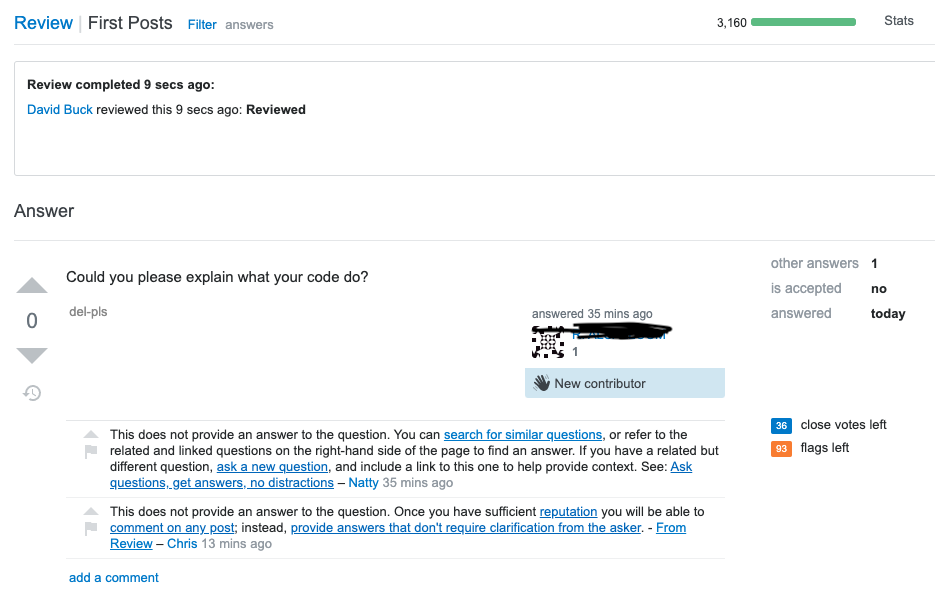 In this example, before I reviewed the post in First Posts it had already had an NAA flag, in this case from Natty, and it already had a delete vote in LQP.

Under the circumstances, I can't see the value in the FP review having remained in the queue once a single delete vote has been cast.

There is a possibility that someone might edit the post in FP, but as a lot of FP reviewers have < 2000 rep, this will create an additional edit review task for a post that already has at least one delete vote and is probably (although I don't have the stats to back this up) on its way to being deleted.

There is a possibility that the FP reviewer might raise a mod flag, but as FP is accessible at 500 rep and LQP at 2000 rep, plus LQP requires 4 reviewers to complete the review, the value of this seems limited.

There is a possibility that Spam might get flagged as NAA, so it could be argued that the FP review might still be useful, but one should be able to hope that experienced LQP reviewers will recognise spam for what it is and flag correctly, rather than simply vote for deletion.

This leads to my suggestion; that if a post receives even a single delete vote in LQP, that any outstanding review in First Posts should be invalidated at that point to prevent unnecessary reviewer effort. Whilst my examples refer to First Posts, the same suggestion should apply equally to the Late Answers queue.

58
Edits to posts should not immediately remove flagged items from Low Quality Posts review queue
6
Why do Late Answers always show up in the First Post review?
31
Should I cast delete votes on non-answers? Or flag them? Or both?
38
Scrap VLQ flags and have a Delete Votes queue that works like the Close Votes queue