Is there a place I can look to see how much rep I earned one day excluding the ones from accepts? [duplicate]

I can manually check how many of my answers were accepted, multiply that by 15, and subtract that from the total rep gained that day to see how much more I'll be able to gain from votes.

But is there a place I can look to see how much rep I earned one day excluding the ones from accepts?

Here is a SEDE Query that does that.

It queries all your posts and links them to the votes those posts got. In the votes table upvotes and down votes are recorded as a row with votetypeid = 2 for an upvote and votetypeid = 3 for a downvote. By grouping on the creationdate of the votes and summing the number of rows of each votetypeid we can calculate how many up and down votes you received on that single day. Doing the multiplication of upvotes * 10 and subtracting downvotes * 2 will give the estimate of the reputation gained / lost on that day.

This query doesn't take reputation limit or bounties into acount.

When run today this is the result: 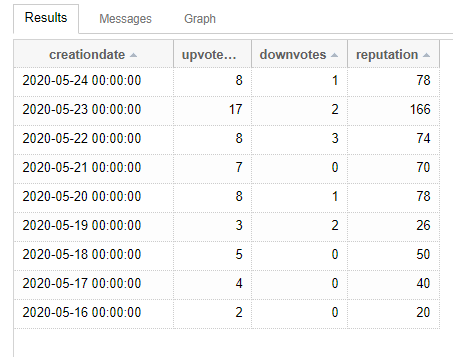 SEDE is updated once a week, on Sunday.

that is documented here: https://api.stackexchange.com/docs/reputation-on-users#ids=13552470&filter=default&site=stackoverflow&run=true

249
Why did I gain/lose reputation? Can I audit my reputation history?

19
Is there no limit to edits you can make in a day? (rep farming)
14
The rep history shows over 500 rep in one day, even though there are no accepts
3
Does the order in which reputation is earned influence your daily limit?
12
Why am I not getting the +2 points when I edit questions after I've earned “edit questions and answers” privilege?
5
It is possible to gain rep past your rep cap through a bug/loophole
32
Why are accepts excluded from the daily reputation cap?