Am I rude and abusive suggesting English variable names?

I was answering a question which used variable names in a foreign language, maybe Dutch.

In my answer I suggested to use English variable names, because I found it rather difficult to figure out what OP wanted to achieve. If they were Chinese, Russion or Greek characters, I could probably not have helped at all.

Now, a user pointed out in a comment that this is considered rude and abusive. 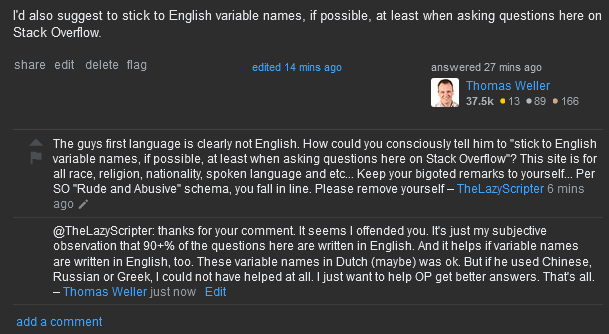 If that's really the case, I'd like to change my way of writing - or maybe remove myself from this site, because it will be more and more difficult to contribute on this site, if everyone writes in his native tongue.

Which guideline am I violating?

Edit: Since @ChrisF♦ removed the affected sentence, it seems that I should really not suggest English in code.

No. You are not rude or abusive.

If someone writes code that is difficult to understand because the variable names (or comments) are not in English then this is a problem:

It can be particularly problematic when the code doesn't actually make sense and you need to understand what the OP is trying to do. This is often the case for "beginner" problems where the OP's code is nonsensical and their descriptions are incoherent. (Not in >>this<< example though, IMO!)

One approach is to suggest (politely!) that they translate their variable names, etc. However, the consensus is that such a suggestion does not belong in an Answer. I would be inclined to comment on the Question something like this:

"I am afraid that I don't understand what this code is trying to do. It may help us to understand your problem if you translated the variable names and comments into English."

Another approach is to (politely!) qualify your Answer; e.g.

and then proceed to answer based on what you understood despite the variable names.

Another approach is to just vote-to-close as "unclear what you are asking" and move on. This assumes that variable translation is really necessary. As @Scratte comments, non-English variable names are not a prima facie reason to close a question. The vote-to-close privilege should be exercised responsibly.

The final approach is to just ignore the Question entirely.

Note that this is not a code style issue1. It is a communication issue. We are not suggesting that the OP change how they write code for their own purposes. We are only concerned about the code that they ask for our help on.

Which leads me to a final point. I think that we should only be suggesting that the OP translates variable names and comments if it is necessary to make the Question understandable to you. If you can work it out or if you could work it out if you put in a bit of effort don't suggest.

I don't speak Dutch, but I think I can work out what nearly all of the variable names mean from the code and the context. So in this case, I would not see the need to comment. But I only speak for myself.

1 - And commenting on style is not necessarily off-topic anyway. It depends on the programming language and whether it has strong / widely accepted style conventions.

Actually, (3) is what makes my opinion about this phenomenon more negative as it is reasonable. We are not a free problem solving machine. I see many times, particularly in first posters, that they communicate as if they would talk with some AI.

Maybe a standard comment like this would help a lot: "Hey, we are not a bot, we are real humans. You are asking us to solve your problem for free. Please honor us by doing all what you can, to make our task easier".

I think you are pretty right.

Side remark: The whole problem would be non-existent if the SO could exist on any language where there are enough users for a healthy site...

Short answer: They probably need to switch to their language's version of Stack Overflow.

There are already some versions of Stack Overflow of a certain language. The biggest one (apart from English) is the Russian version, though I'm not sure if there is a Dutch version however (figuring out the name of variables are all Dutch).

Although this means that you're not rude or abusive, I believe they still have to go to their language's version. Maybe even moderators can migrate these questions to those sites.

UPDATE: From @10Rep's perspective, migration isn't actually required. I still do believe that they have to go to their language's Stack Overflow.

If they were Chinese, Russion or Greek characters, I could probably not have helped at all.

I don't think this is completely true. Variable names are just identifiers, they can be in any language or none at all and as such don't change how the code works. Of course, descriptive, short variable names are better than arbitrary or overly long names, helping to understand code. Since English is the most widely used language it makes sense to actually use meaningful English variable names (at least when asking on Stack Overflow).

You or the question creator or someone else could have improved the question and renamed variables, but this could in itself introduce additional errors and often it's not so easy to decide how a variable should be named best. Opinions on that probably differ.

In this concrete example:

The name klaar looks as good to me as the translations to English (ready for what?), alijst is also only marginally less helpful than alist (which is a dictionary, not a list).

A possible renaming of variables in the question is to me more of a meta thing and should rather be a comment to the question than part of an answer (something like "I have difficulties understanding your code, please consider translating used variable's names to English to help me and others understand the problem better.").

Finally, the question really isn't a great one. The code is not minimal and the problem is not stated clearly (How exactly are prizes supposed to be added together? Where are the prizes stored?). If these weren't the case, the variable names might be less of a problem if at all.

Summary: Your comment in the answer was not rude or abusive but at the wrong place and in this case maybe not necessary. The comment calling you out, however, was rude and abusive. It's really good that it's gone.

212
Are error messages required to be posted in English?
58
Do non-English words increase the probability of receiving downvotes?
-11
Using confusing variable names in questions

5
How was a rude and offensive comment handled?
2
Are wrong variable names and other simple rookie mistakes (0 effort questions) flagable?
60
Sometimes, "rude or abusive" is highlighted red - why?
146
Is mocking the Indian English used by a user abusive?
4
Rude/abusive flag not shown in Flag History
7
A post with an image containing bad words in it isn't rude or abusive?