Why was this community nominated for a "Webby" award, and why am I compelled to care?

I honestly feel like the title says everything here...

Right, so...my usual laconic style of question asking doesn't quite seem to be getting the answers I want, so I'll try a slightly different approach.

To be frank - I've never heard of this Webby site in the years that I've participated on the Internet, and as such, I've never considered that it had any material bearing on Stack Overflow as a community. It's not a site that I would find myself on by accident or happenstance; there's no circumstance where the Venn diagram of my usage or participation on Stack Overflow has any overlap with what Webby is.

I'm suddenly being compelled to care about this overlap, though, through the use of a banner. While I could just dismiss the banner, I strongly, strongly question why it's in the banner at all. Nothing about this kind of engagement is even called out on the roadmap, so I'm incredibly put off about it being brought to my attention in this fashion.

The question I'm asking is, why? Why is this appearing in my community if I can't demonstrate that it has any bearing on my community?

As Jon has already kindly explained, the Webbies are an award given out to websites, much like Grammys are for Music and Clios for advertising. In this case, two awards are given out, one from industry professionals and one that's more like the People's Choice Awards, voted on by anyone willing to give them an email address. Though I can't personally say that I'm aware of them to the same degree as I am of the Oscars, they seem to be a pretty big deal for the internet. So, for a site to be nominated, it can be a big deal to the site.

I think, rather than why you should care, what you're trying to understand is how this impacts you as a user - and that's a fair question to ask. We use these banners infrequently so there's a heightened sense of urgency and attention any time we do use them - so I can imagine that tickles your mind to think "this must be a big deal that I need to know about and act on"... and, well, it's not. This is something that's exciting in the same way it's exciting for a musician to be nominated for a Grammy and it's something you want to share with the people who are interested in you. The fact that the users here can participate in voting for the public awards means that you can influence the outcome, too.

Being nominated in the Community category is recognition for what y'all have done with the platform - making it a place people can come to get excellent answers to questions about coding - this is a service that programmers and enthusiasts around the world take advantage of frequently, if not daily. We are and have always been proud of that work. Yes, the last couple of years have been rocky to say the least - there's a lot of issues with how the platform sets expectations for new users and trains them to participate effectively. This has caused some friction between people who are frustrated at work and trying to get an answer to their problem and people trying to help them get that answer by writing one or pointing them to a similar one. I think there have been a lot of changes recently that are improving that experience and we're continuing to do work to reduce that friction as much as we can.

There's also a signal that being nominated (and winning) the Community category could send to people looking for an internal Q&A platform like Teams - if our community is recognized for being great, that's something that might encourage them to give Teams a try for their internal community, too, and having more people using (and paying for) the platform gives us more to work with to improve it.

We chose to add the banner for a short period of time for all of the reasons I've outlined above - it was put up late on Wednesday and taken down on Friday. This is a tool we don't use often and, as I noted earlier, that means it can be interpreted as rather urgent, particularly considering that we should remember that SO is a place where people come while they're at work and we should be careful about distracting them unnecessarily. We were excited about the votes we got from having this banner up and visible to millions of users even in the short period of time it was up. We also need to make sure that we're thinking holistically about whether something's best served in a banner, blog post, meta announcement, or on one of our social media accounts so that it gets to our community in a contextual way that doesn't impact their workflow.

I'd raise another concern that might be worth more than posting in a comment. Is it ethical to unleash spam from the entire population of Stack Overflow (one of the largest if not the largest tech communities) on such a public vote? Would it not be a steamroller overwhelming any kind of useful signal from the vote?

This is of course assuming that the vast traffic that Stack Overflow sees each day will be directed toward votes for Stack Overflow. Some users might not do so, but the average user being happy to use their vote somewhere will most certainly comply when a big friendly banner instructs them to go vote. I find this sketchy at best.

Because SO's marketing has solidified control of the UX on SO, and they're determined to demonstrate their power by promoting an anachronism, even if it results in banner blindness and hurts future efforts to alert folks to information which is actually relevant.

I recommend not engaging with it at all - not even to dismiss. Use an ad blocker if it's in your way.

Or, as The Simpsons put it years ago... 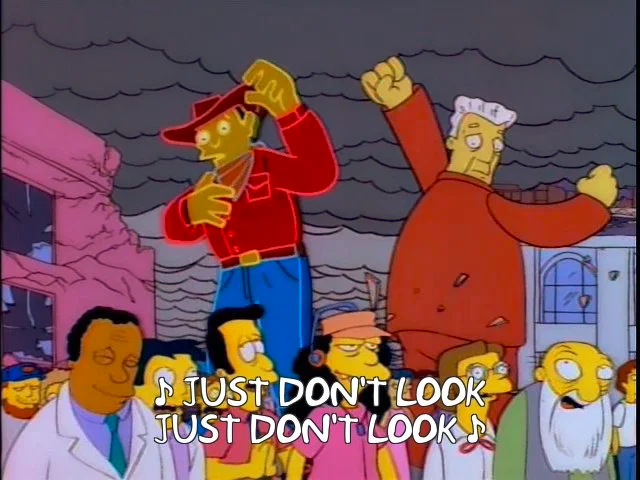 From a marketing point of view, recent "troubles" in the community could be offset by an award, especially one awarded by "votes from a community". A nomination and banner can make sure this happens.

It's effective as a smokescreen, and it's effective as a counter-argument to anybody who argues about community being neglected and glossed over. It's also effective to show that "something's been done" if community votes us up and we win by a landslide. The last point allows to pat oneself on the back and rest on laurels, if one is so inclined.

From a marketing point of view, these are all excellent reasons to compel you to care, vote and spread the word. I wouldn't be surprised if there would be a badge for it.

Because nobody nukes community the way Stack Overflow does...

I am not sure that deserves an upvote, though... luckily for SO, there aren't any downvotes there...

As it happens, I've seen Webby awards, the physical object, at one of my previous jobs. When I was a subcontractor with Jet Propulsion Laboratory (JPL), the conference room on my floor had several on display. The designers of many JPL websites were also subcontractors whose cubicles were near my own. The lab has won or been nominated for many Webbys over the years. In terms of how valuable they are, I'd compare them to Grammys. There are tons of categories, so there are lots of sites that get honored.

I'm personally easily annoyed by notifications. I think using them too much destroys their value. (I'm also a huge hypocrite. The site I manage currently has 4 obnoxious notifications. In my defense, it's also impossible to find anything via browsing, so the notifications are somewhat helpful for our users to know what's going on in this time of crisis.) Unfortunately, Stack Overflow has certainly relied on the topbar banner a little too much. I didn't even notice what was being advertised until I saw this post.

Part of me is outraged that Stack Overflow is organizing targeted voting to win an award. It kinda feels opposed to a value I have as a user of the site for voting to be reflective of the usefulness of the content rather than some group's organization skills. "What about the integrity of the award?!" this part of my brain is thinking. Then I looked at what the category looks like: 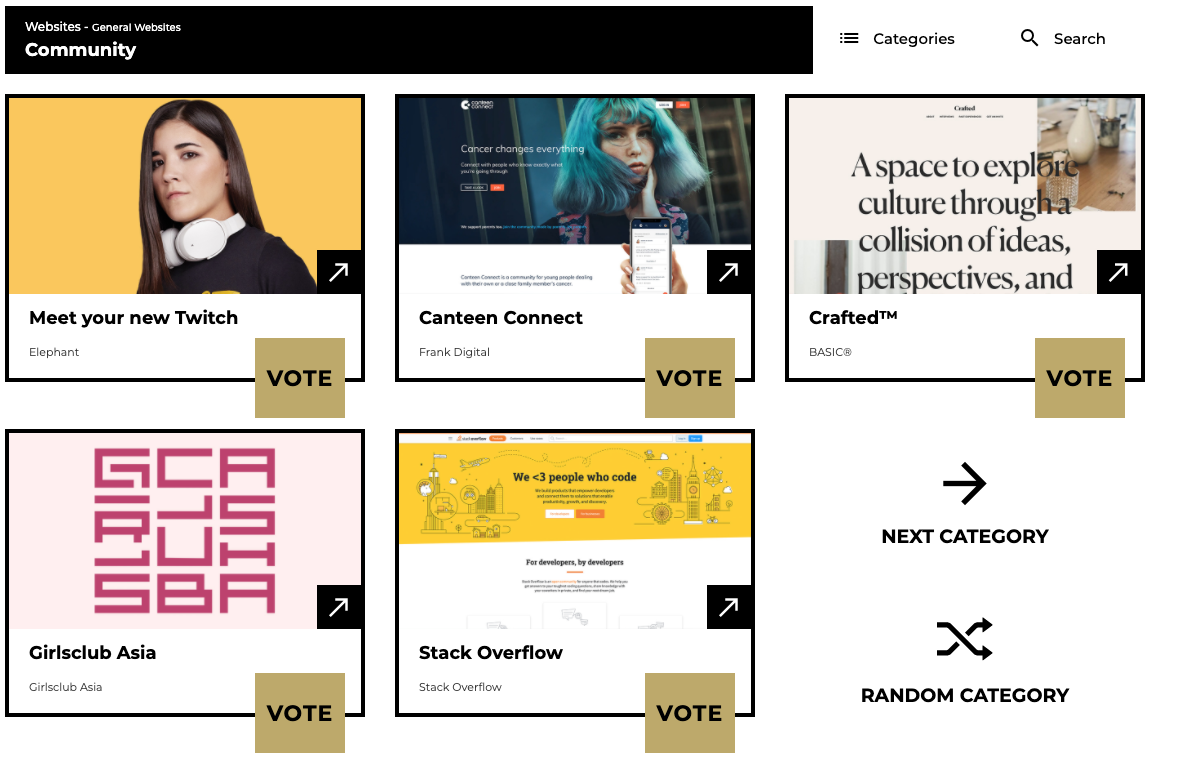 Other than Twitch (for which I have slightly negative feelings) I don't know anything about the competition. And really, who could? The best community is, by default, whatever community I happen to be a part of. It's pure tribalism. As a professional community manager, I sometimes look with envy at other communities that seem to have everything together. But that's because I'm not involved with them. I can't see their hidden secrets, but only the image they display to the world.

So I don't know. Maybe turning this into a "which community is biggest" contest is not the worst thing. Marketing's job is to make the community look its best and if that means telling users to vote for Stack Overflow rather than, say Girlsclub Asia, that's not something to get outraged about. It's not like they aren't doing exactly the same thing:

I think it was very brave of the company to invite us to vote in this contest. Thing is, this looks we are given an opportunity to provide not only positive, but also negative feedback.

I mean, folks who feel unhappy about this banner and invitation can choose to vote for a competing site instead of Stack Overflow.

Hard to tell if this was intended to work this way but I for one am going to give it a serious thought, learn more about competitors (as probably any serious voter is expected to do anyway) and decide which site to vote for.

471
Let's burn down the close queue!
179
Why is "Stack Overflow for Teams" sending out emails paying for reviews on a service?
-894
We’re removing “Hot Meta Posts” from Stack Overflow's sidebar for now; moderators now control the [featured] tag

59
What's the correct thing to do when someone adds a bogus citation to an answer?
327
The world is big and I am SO small. What are the implications for our meta community with the changes in Stack Overflow?
134
A serious request for answers from SO
61
Is Stack Overflow going to incorporate community feedback before adding more collectives?