Is the recent influx of Home Workers and Remote Learning Students impacting question volume and quality?

In the last couple of weeks, many countries have started ramping up things like Working from Home users, and Remote Learning users. Others can't get to work due to the lockdown in their city/county/state and so are forced to stay at home. My question, therefore, is how has this impacted recent questions on Stack Overflow? Has it impacted it at all? Have the volume of questions risen, or has the quality of said questions gone up or down?

The goal of this question is not to identify of the volume or quality of questions has changed compared to last year as a whole; it is specifically looking at how things have changed in the last few weeks.

I used this SEDE query to get some figures on this.

Note: I complete further analysis and provide another TL;DR later down the question, several weeks after the initial data, that has a slightly different conclusion.

TL;DR: Currently there appears to be no significant change to the volume or quality of questions compared to last year. For the Week Commencing 10 March 2020 there was a more noticeable drop in quality compared to the same week in the previous year, however, more weeks of data will be needed to see if this trend continues.

So, let's start off with last year (I won't post the raw data, as you can obtain that from the above link): 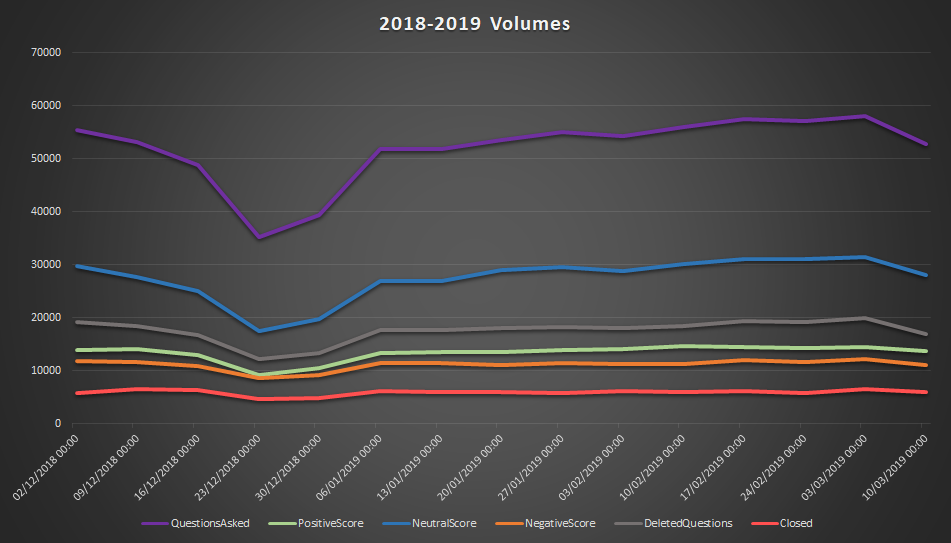 Unsurprisingly, for last year, there was a volume reduction around Christmas, but other that that, things are pretty much flat. This, however, was there for a base line to compare to this year. On average about 21.5% of questions are negatively scored per week, and 11.4% were closed. Neutral Score Questions (those with a score of 0) were about 52.7% on average per week.

Of the questions asked on average 33.7% were deleted. 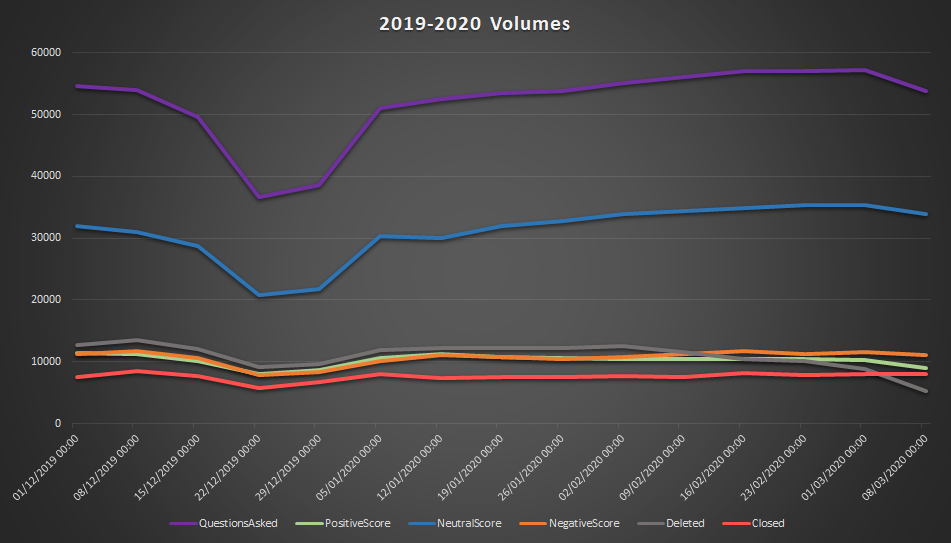 Again we have a dip at Christmas, but that is also again expected. Like last year, we have a gradual upwards trend of question volume as we get towards March and then both have a sudden dip in the last week (second week in March).

Percentage wise, on average 20.5% of questions a week have received a negative score, 14.7% were closed, and about 60% are neutral. I have included the deleted figures in the graph, however, any average is skewed as Roomba will not have deleted more recent questions. I therefore won't be using this in the comparisons.

Firstly, let's see how those percentage look next to each other: 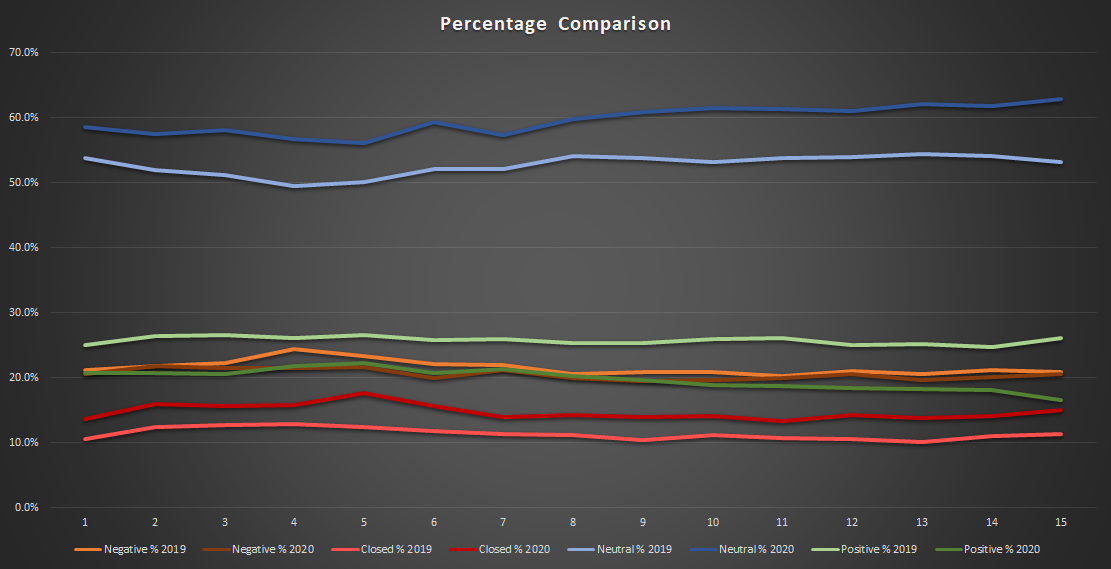 Let's start with the Positive Questions. For 2020, for every week, these have been lower than 2019. That gap, however, has been getting larger (although slowly) and the last week ends with completely opposite results; 2019 gets a bump up where as 2020 gets a bump down.

For the Neutral Questions, these two lines are actually pretty much following the same pattern. Both dip at first, and then rise up a little. Again, however for the final week they have opposite bumps, with the volume going up in 2020 and down in 2019.

Negative Scoring question very much go hand in hand here. in fact apart from a rise in % around week 4, there is little to no difference.

For Closures, the same trend really, but just that 2020 has more. This, however, I feel could easily be influenced by the change to the 3 votes to close, so isn't really a fair test.

From this, it does suggest that the percentage of positively received questions is down, and slowly trending downwards; but it has been for months. There is a sudden spike last week, however, there is not enough information to suggest that it is going to continue. If the volumes stay down, this might be an indicator.

Volumes wise, we have a similar story: 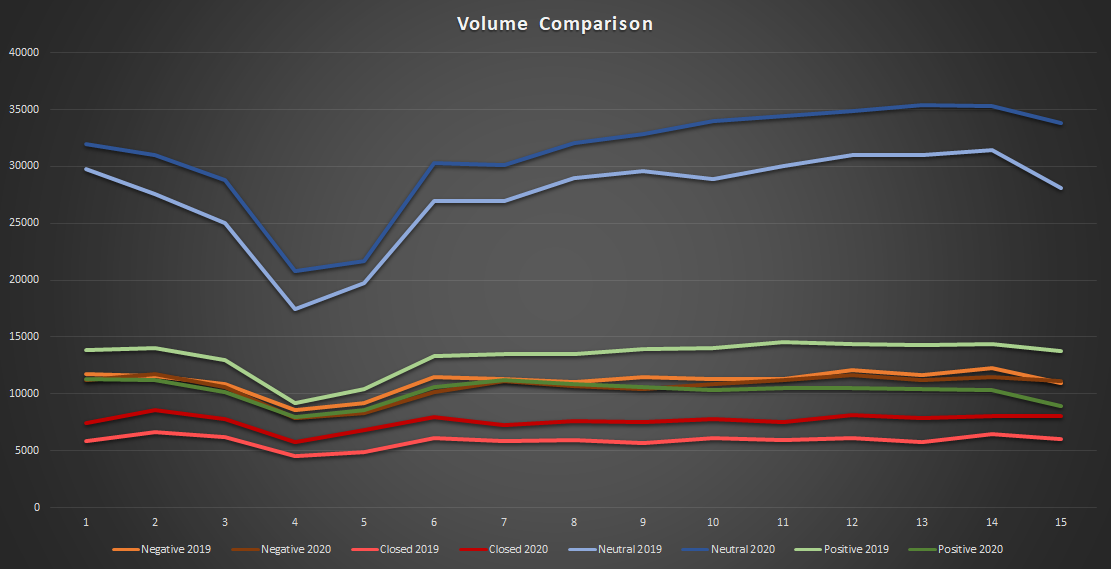 All are following a very similar trend, with 2020 Positive being lower than last year, Negative being about the same, and Neutral and Closed being higher.

At this point, therefore, I would suggest there isn't enough information to suggest that recent events are effecting Stack Overflow in a positive or negative way, however, at present it looks like it is not. Certainly positive scored questions are down, but that has been consistent for the whole 15 weeks in the data view, so that's nothing new.

I will, however, see how thing looks again in 4 weeks or so, and see if there's any changes. For some countries, that aren't fully making use of home working, this could begin to show their impact, or it might simply not show anything has changed.

There's also, visually, very little difference if you stack the percentages of positive, neutral and negative between the years (so far): 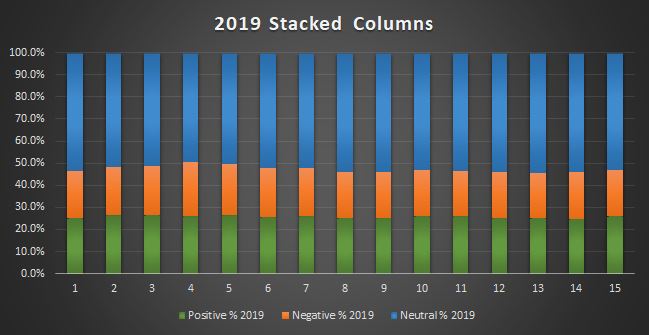 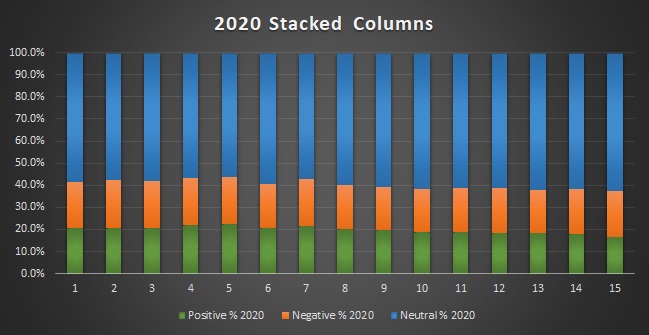 Note: Data shown in graphs was correct at the time the SEDE query was run. Question votes, and closure/deletion volumes can change, and the graphs will not be reflective of this unless they are updated at a later date.

OK, so we're a few weeks later now, and I wanted to do another update. Almost every country (or state) appears to now be in some kind of lockdown now. Previously when I first wrote this question, and answer, I was still at the office but it was my last couple of days of doing so. Many other countries are following the same process, so I'll likely do this as a final update; if anyone else wants the Excel document I used, I'll upload it later for others to download and you can use the SEDE to update to fill curiosity.

OK, so first let's get to the volumes, as I found the last week really interesting: 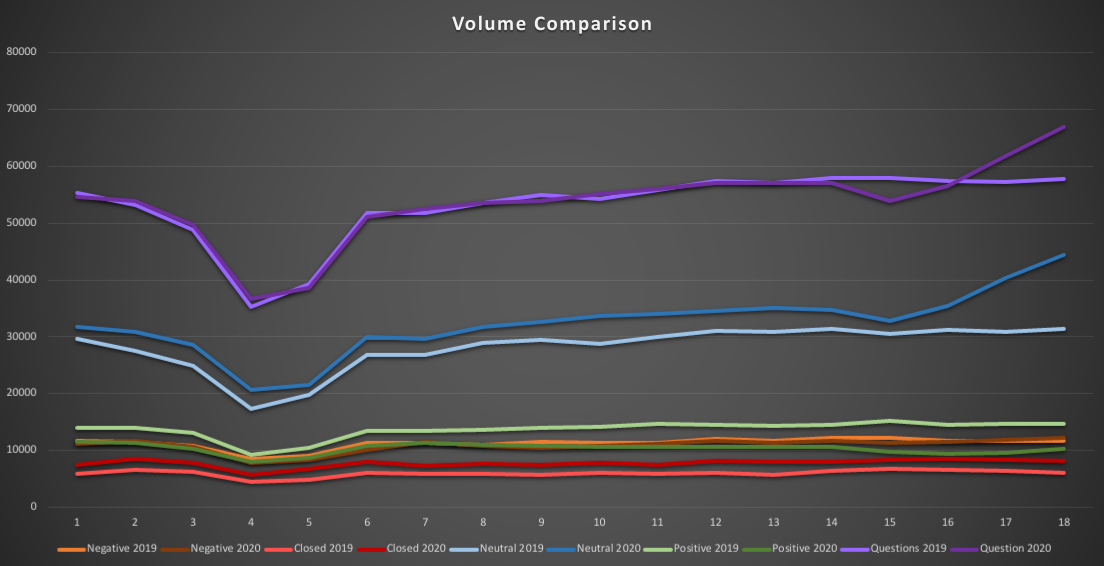 Notice the huge spike in questions last week. This isn't a small increase, it's over 5,000 more questions than the prior week, and (excluding that prior week) around 9,000 more questions that any other week in the entire dataset. In just a week the total volume of questions increased by almost 10% (about 8.5%). I don't expect the volume to keep increasing like that, but I certainly think that the impact of recent events surely has incurred this spike.

As for the volume well, poorly and neutrally received questions all areas went up, which is not really a surprise. More questions means more reactions, and thus more of everything. Especially with such a big increase.

SO, let's have a look at the percentages instead, which are more likely to show how well the community is receiving these new questions: 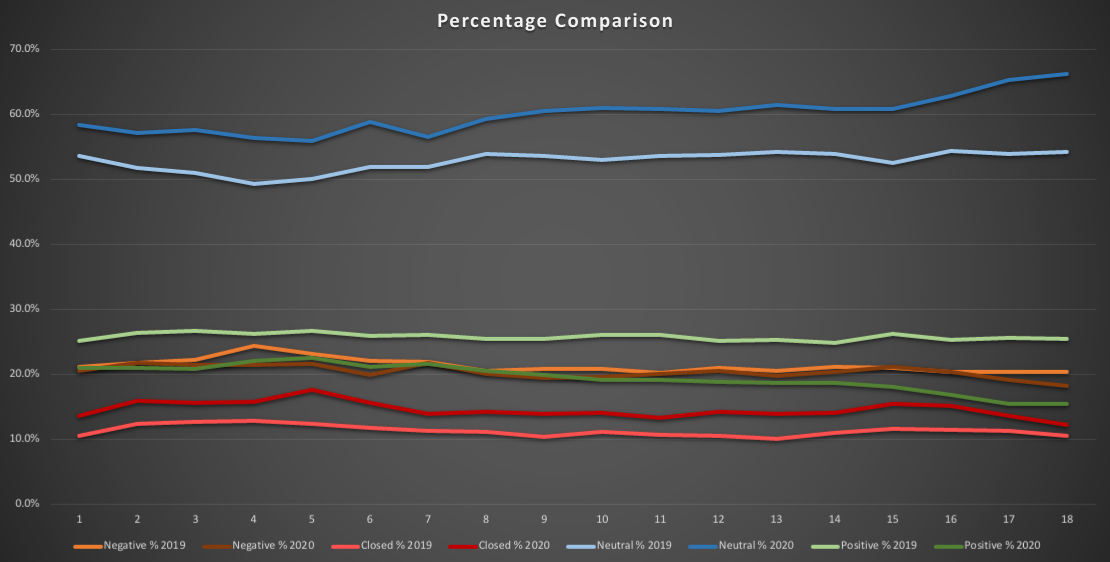 Well, it seems that actually the questions are being quite neutrally received, but certainly not poorly. In the last few weeks the percentage share of questions that have been poorly received by the community has fallen; from over 21% in week 15 to just 18.3% in week 18. That isn't a huge fall, but I see that as a positive. Any fall in negatively received questions is a good thing for the community. Now, that could be due to new users (or users that previously lurked) gaining new privileges to vote to be being active, but even if they find the questions find the questions helpful, while other more active members find them unhelpful, or lack research, it's still a net gain for those users.

Positively received questions did go up in the last week and it's settled at around 15%, with just a 0.1% downward change since last week.

Neutrally received questions got a a big increase over the last couple week, going all the way up to 66.3% of the questions asked in a week. These questions aren't necessarily bad, but it (based on my personal experience) I wouldn't be surprised if it's simply that the question shows some attempt or research, but had they spent a little more time (not asking at the first hurdle) they would have got their answer. These aren't bad questions, and don't (in my belief) don't deserve a downvote, but they probably aren't going to be helpful in the future when another search, or taking a moment to read the error in it's entirety, would have got the answer.

The stacked columns just show the percentages in a different way, but help visualise: 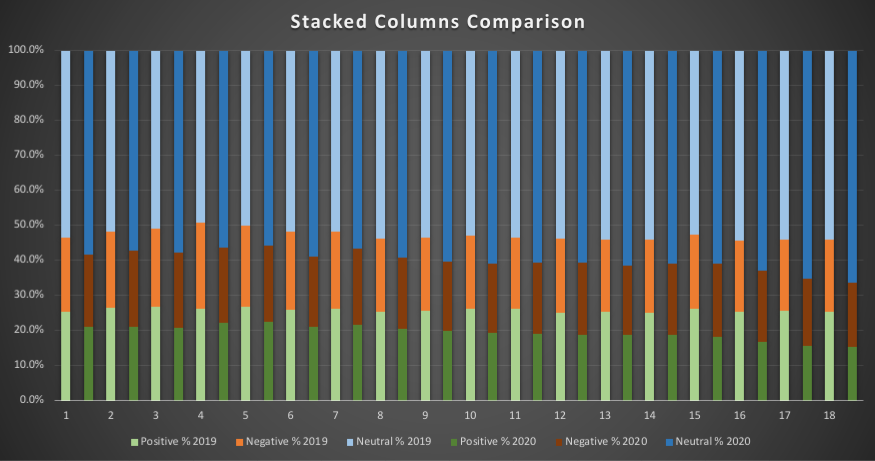 You can see, for recent weeks in 2020, that Neutral questions are making up the vast majority of the questions and are steadily making up more of the total. Positive questions, although down, aren't going down as steadily, and so too are negatively received questions.

Like my initial TL;DR, it appears that quality isn't really being effected, and in some regards it appears that overall there is possibly a "small" improvement due to the lower percentage of questions that are received negatively.

On the other hand, volume has now certainly been effected, with the last 2 weeks having more questions that any other week (and the last week gaining a huge increase). Perhaps I'll see, when this is all over (in x months time) just how this all panned out in the end for the volumes; but I'll let things get back to "normal" first. :)

I feel like the data by Larnu is fairly complete and accurate, but I wanted to offer an anecdotal perspective.

The vast majority of people who have the privilege of working from home and are already Stack Overflow users wouldn't have had their habits changed terribly drastically when it comes to using the site, unless they weren't working for any reason.

I would not be under any impression whatsoever that there is an "influx" of home users who are also Stack Overflow users who also ask questions, for a few simple reasons.