I failed this question that was presented as an audit in "Close Votes" review queue.

I voted to to close it as "non-reproducible", as I've seen many other reviewers do, only because the OP indicated in the comments that their problem was resolved. I now realize in and of itself, that is insufficient justification to close a question. By looking at the text of the non-reproducible option more carefully (included below), I see the category offers qualification for when to choose it, but reviewers are commonly missing the 'subtlety' and apply it haphazardly.

I assume the underlying sense people voting to close those questions have is that questions resolved in comments don't need to stick around, maybe because they don't think they are 'archival quality', whatever that means (e.g. subjective). Perhaps many questions are seen as 'trivial' very user-specific problems that would not be valuable to a wider audience, but who knows? Sometimes I stumble on some idiosyncratic noobish question whose answer shed light on a problem I was having. So, even though the qualification for choosing that response is clear, it is easily and often gotten wrong.

Interestingly, the next review question that came up for me is a similar situation: (1) Question asked, (2) Someone's comment helps, (3) OP replies problem is solved. And, yet again, a reviewer opted to close it as non-reproducible, even though it's clearly a duplicate.

Thus, it is an extremely common way reviewers are handling questions like that in the review queue, wherein the question-asker merely indicates in comments their problem is resolved, and wham! it's voted to close as non-reproducible. I'll avoid doing so in a knee-jerk way, but it seems to be a commonly confused and abused category resulting in many potentially valuable questions getting closed inappropriately.

Fortunately one audit saved me from my own ignorance, but unfortunately audits that catch that oversight may be far and few between... 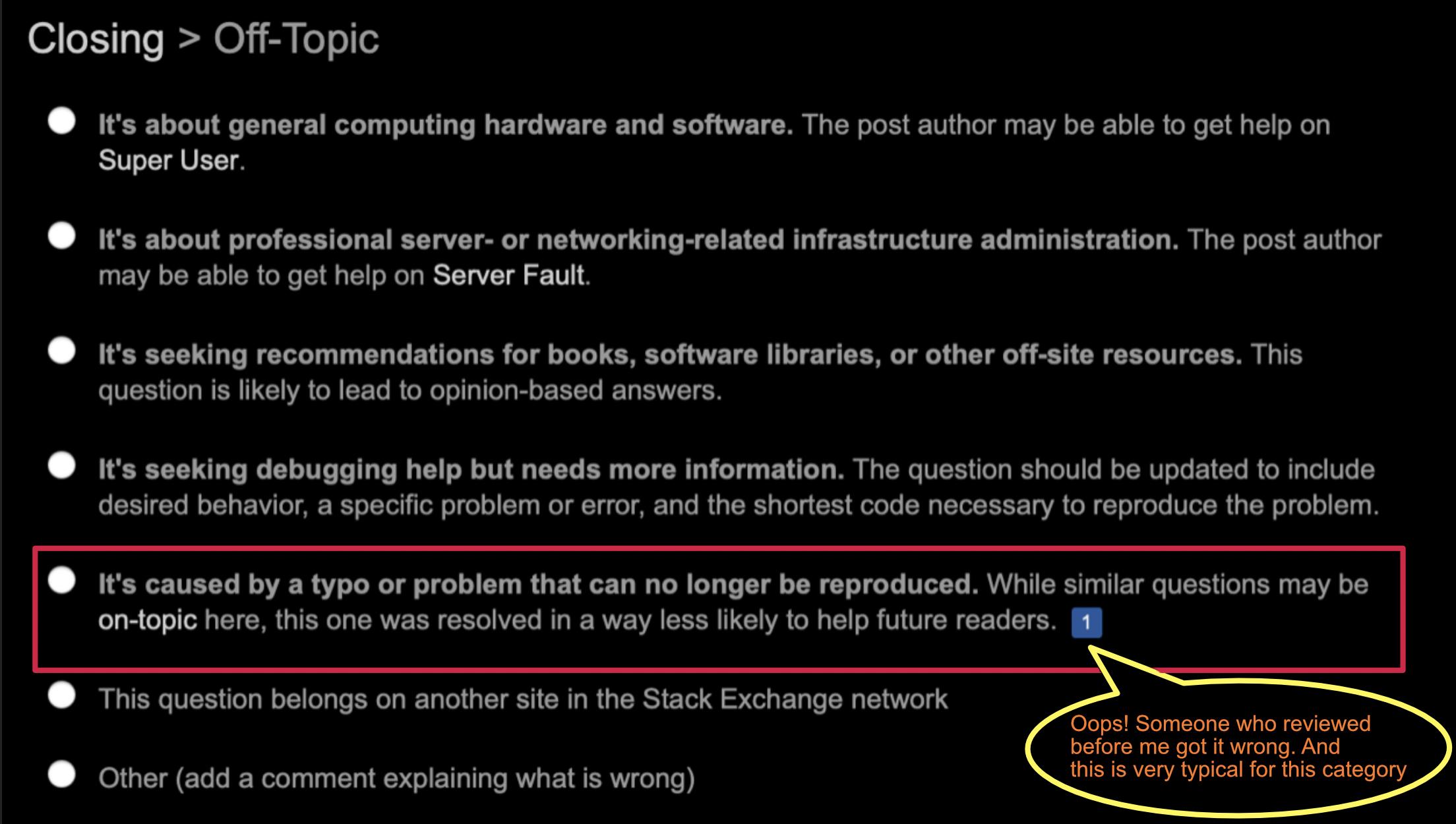 8
Failed review audit with closed question
20
Non-reproducible example in question. Edit or not?
5
Close Vote Review audit failed
6
Should audit posts be moderator-validated? And should you be review banned after one failed audit?
2
Failed close vote audit
1
Is this a valid closed question and audit test case?
26
Failed Audit by Flagging a Question on Hold