Have the comments posted on Stack Overflow by itself become more friendly over the years?

Looking at the graph showing the historic evolution of the percentage of unfriendly comments made (red line) as detected by the Unfriendly Comments Robot v2 (UC-R2) taken from this answer of Did Stack Exchange cut the number of negative comments nearly in half between the beginning of the fourth quarter of 2019 and January 21, 2020?, it looks a bit as if, except for a bump in 2018, the fraction of unfriendly comments made has gone down quite steadily. 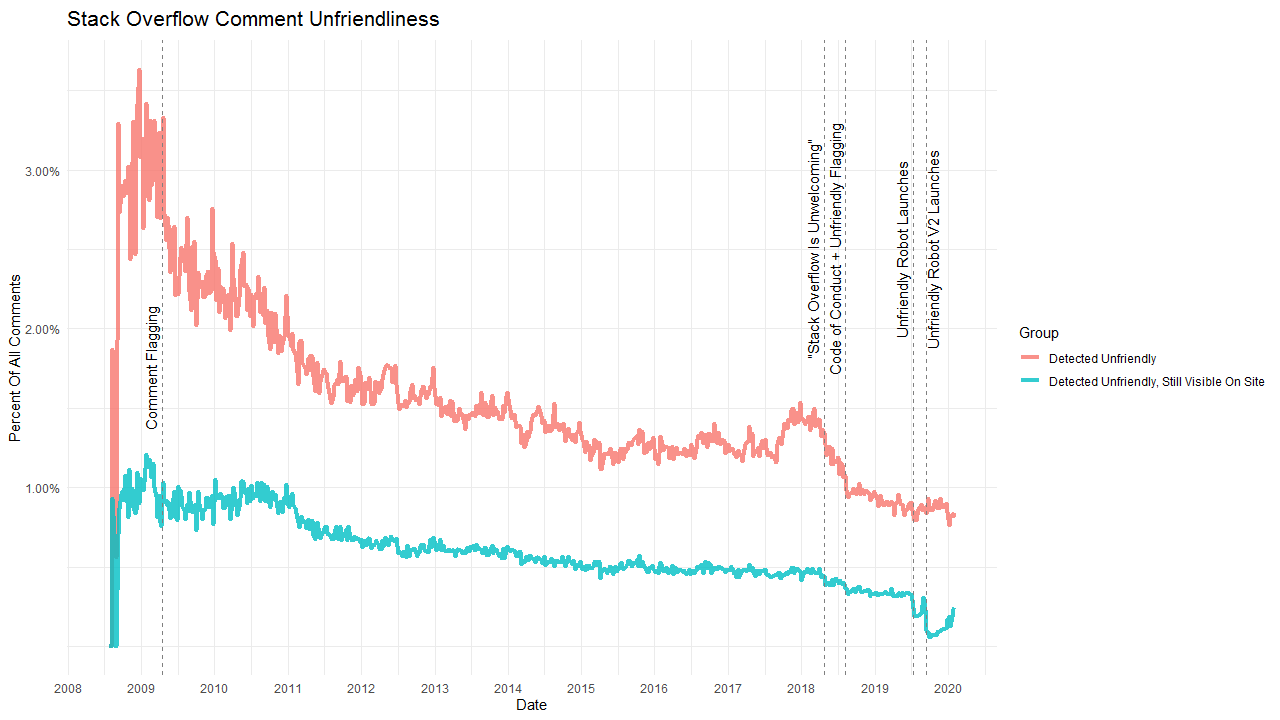 I take it that the red curve describes the situation before any moderation or comment flagging took place and depicts the fraction of new comments at each time detected by UC-R2 for a given threshold. The long term trend since the beginning seems to be pretty positive in terms of friendliness and comments made on Stack Overflow supposedly never were more friendly than now.

Is this reading correct? What is likely the cause for it? Did people in general become more friendly over the last decade maybe or is the long-standing effort of the moderation and flagging (and as of late also automatic detection) of comments paying off over the years, kind of establishing a culture of friendliness on SO over the years? Or maybe something else?

A bias by the classification method is unlikely because it was only invented in 2018-2019, so commenters in the past didn't know that their comments would be classified now. Also over the years millions of new users joined and commented and also millions stopped participating as well. There is a huge turn over although some people surely took part for a longer time and may have changed their behavior. Finally, there were UI changes at some time points that have an influence, but the long term trend is so broad and long-lasting, I would not really assign the full effect just to them.

Finally: If this graph somehow says that Stack Overflow never was more welcoming at least comment-wise, why do site satisfaction surveys put welcomingness problems at the top of most often named problems? Could it mean that there aren't really any pressing problems currently or are the reported welcomingness problems unrelated to comments or are the detection results of UC-R2 maybe not representative? Or maybe something else?

671
Does Stack Exchange really want to conflate newbies with women/people of color?
162
Did Stack Exchange cut the number of negative comments nearly in half between the beginning of the fourth quarter of 2019 and January 21, 2020?

3
Where can I see all the comments I have posted?
147
"Prefer not to answer" in the Developer Survey Results 2018
120
When is a comment hostile or unfriendly? (Educating newer users how to flag comments)
162
Feedback on the blog post: Is this the actual mission and goal of Stack Overflow now?
38
Why is the rate of positively scoring questions and answers steadily declining?