Status of removing the Excel-vba (and similar -vba) tags

Referring to this posting from Shog9 from 2018 and this request for a follow-up from 2019.

Since Shog is gone, what is the status of implementing the removal of the -vba tags, as he had planned?

People are still editing these out, as discussed in those "threads", but it's time-consuming when the editor does not have enough rep to circumvent the review queue and the practice meets push-back from some users.

excel-vba is gone. So are all other *-vba tags. Long live vba!

Over the past two weeks or so, I've been cleaning up the per-application -vba tags, by adding vba where there was only a [name]-vba tag. I then merged the remaining use of the [name]-vba tag into [name]. This ensured that all posts which started with [name]-vba ended up with [name] and vba.

(Note that in some cases [name]-vba to [name] meant adding ms- in front, so word-vba maps to ms-word).

In this process I cleaned out:

After handling ~900 questions I reached this point for vba-excel: 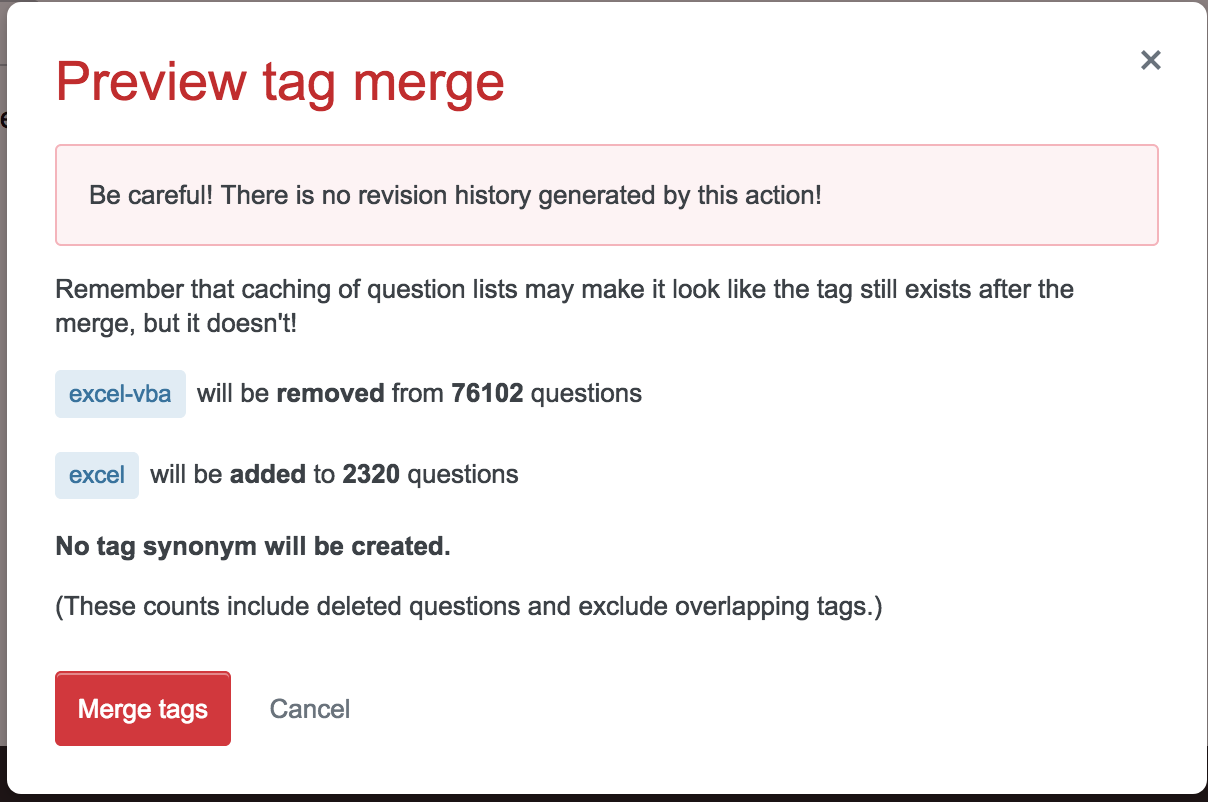 and I clicked the button.

The status is now: 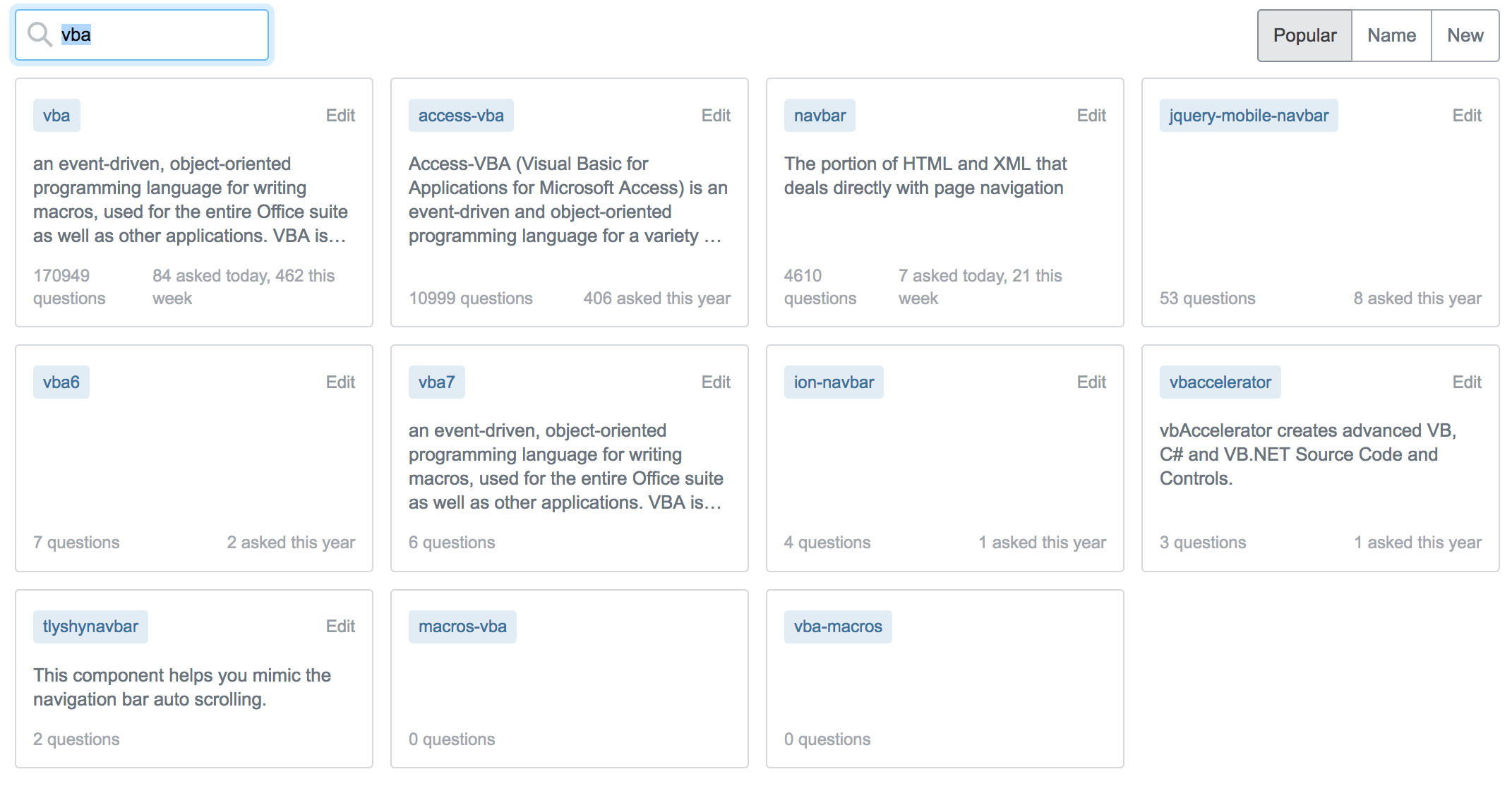 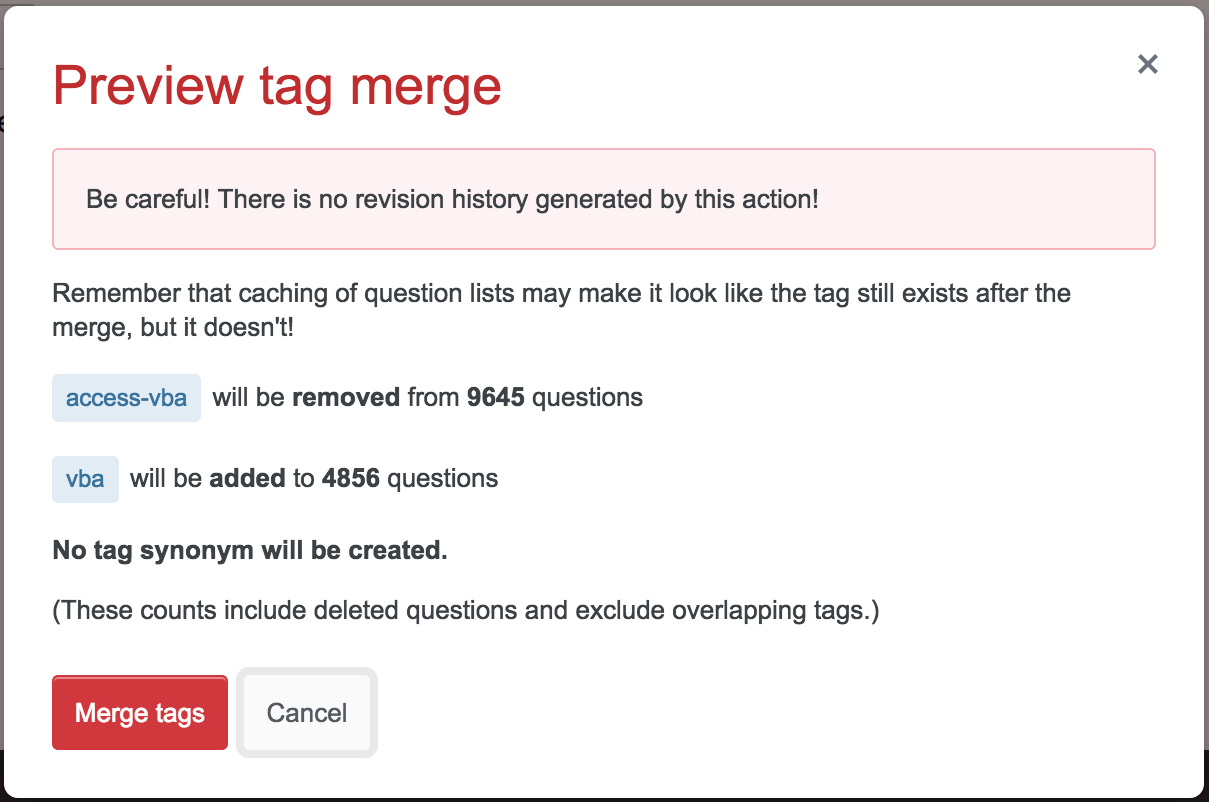 The astute observer will note that access-vba is still there. That's because there are over 5000 posts with that tag but are missing vba. That's half of the posts with that tag, and simply way too much for me to attack on my own.

I'd love to see this change, but this is a bigger job than I want to handle. It will have to wait for the Community Manager team, as there currently is no good path to handling large-scale tag operations available. I'd love to see a similar yellow warning message on the tag to help steer this towards sane tag use.

I did clean out the confusing access tag to make it easier to untangle ms-access from access-vba in future.

But, there were people against this!

Yes, and there were people for it. It's been a tug of war stretching over many years. Yet the problems, confusion and the retag wars persisted. Someone needed to cut this Gordian knot.

Shog9 started sharpening and swinging the sword. I simply finished his work by making the final cutting swing.

Big thank you to Shog9

I was only able to do this because Shog9 had kicked off changes that drastically reduced the number of posts to re-visit:

I think the answer here is nobody is doing burninations or cleanup at present. Shog9 wasn't doing any AFAIK before he was let go, and the community hasn't been engaged enough to run burnination (they require a lot of work). There's no plans to do a burn or merge anytime soon. Given the current state of Community Managers, this would probably fall to Catija, and she's probably got enough on her plate as-is.

If you have opinions about whether or not to do this, please vote or post on Shog9's question, as that is the canonical for all burnination discussions.

Deleting excel-vba is a serious mistake! It was the saner tag all around and ignores the biggest problem: the excel tag.

Two tags don't do better job than a single one. There isn't a hierarchy of tags. Users answering questions on excel don't have total domain on VBA nor vice-versa. Merging these tags would cause an irreparable harm for all those involved since it would merge all the privileges that the users acquired or would be able to acquire in topics that they aren't experts into.

The saner approach would be to delete excel. Only a subset of questions of excel are even on topic, and those have (had?) their specific tags: excel-formula exceljs exceldatareader excel-addins excel-dna and the now merged excel-vba. As you can identify, those tags are specific and can work as the only tag on the question and would be obvious that they are on topic questions, questions that are attractive for actual software developers.

excel for the other hand attracts end-users of Excel. From graphing using the included graph helpers, cell formatting, etc. Those are things that management loves to do, not actual developers. Please, revert this and make sure that the tag that prevails is the one that is useful for software developers, not just the one that seems more easy to keep.

145
Merging the [excel-vba] into [vba] - speak now, or forever hold your peace
38
Tag editor extraordinaire
24
Duplicates dichotomy: [excel-vba] vs [excel] + [vba]
45
Limit [access] to this tag: Burninate or merge with [access-control]?
10
Is the Excel-VBA tag going to be removed soon or not?
31
Add VB syntax highlighting for [*-vba] tags
20
Retag [java-reflection] to [java] + [reflection]
13
Should we do a cleanup of tags related to TypeScript concepts?
9
Combination tags (aka "hyphenated tags")
4
Should [google-apps-script-simple-triggers] and [gs-installable-triggers] be scrapped in favor of [google-apps-script]+[triggers]?
See more linked questions

10
Is the Excel-VBA tag going to be removed soon or not?