Why is the rate of positively scoring questions and answers steadily declining?

I looked at the number of newly created, non-deleted, non-closed questions and answers per month split by score (negative, zero, positive). (SEDE query) 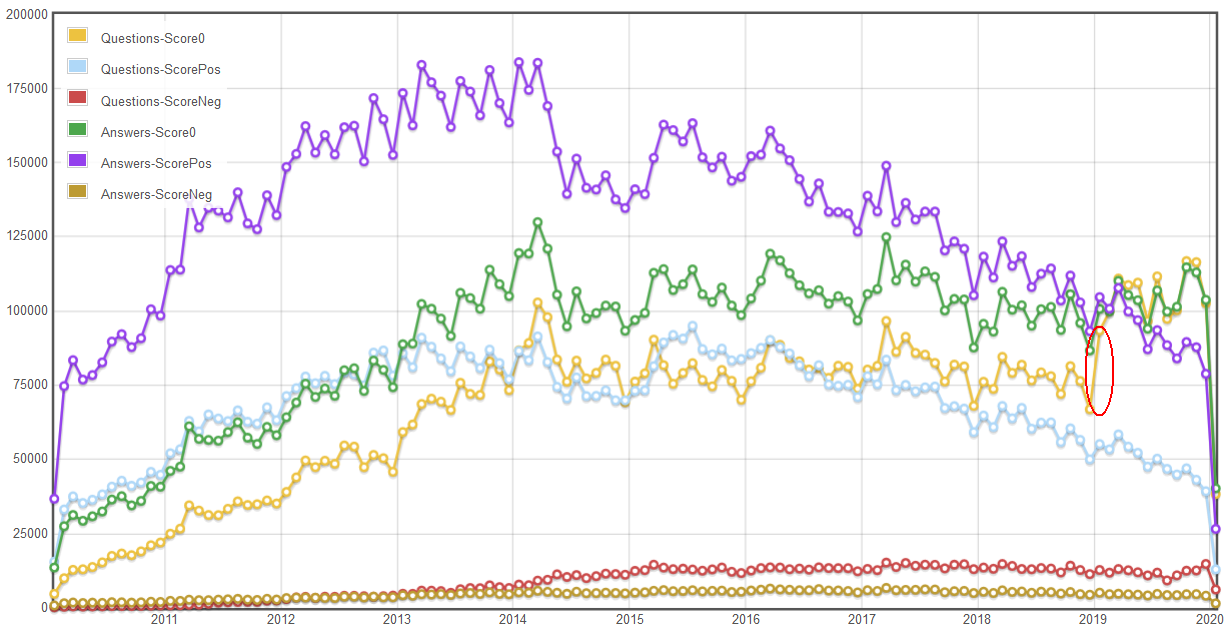 Then I can plot the number of total new questions and answers over time as well as splitting them into negative, zero and positive scores. 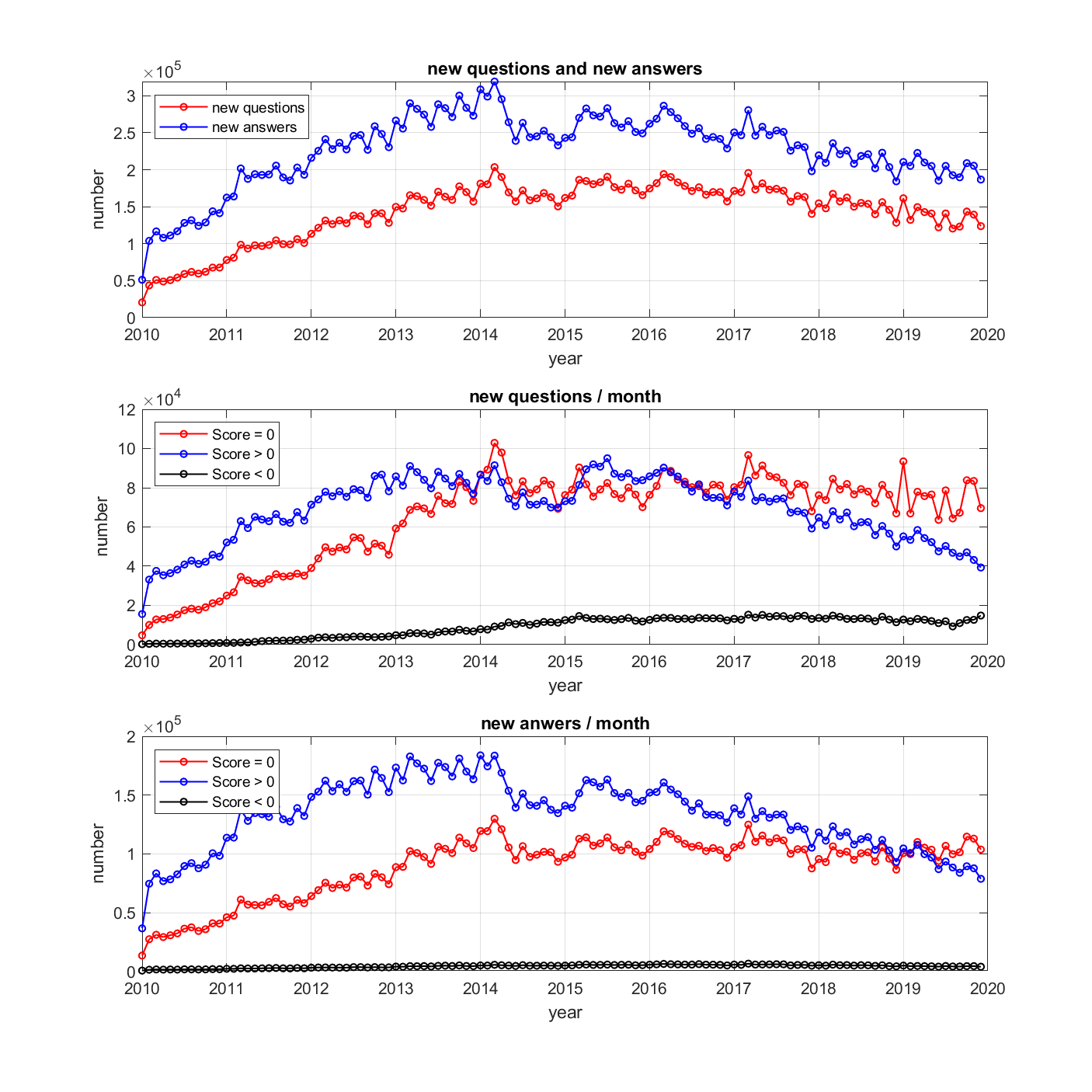 The overall behavior is that the number of questions and answers peaked at the beginning of 2014 and are slowly declining since then. Further I calculated some ratios. They look like 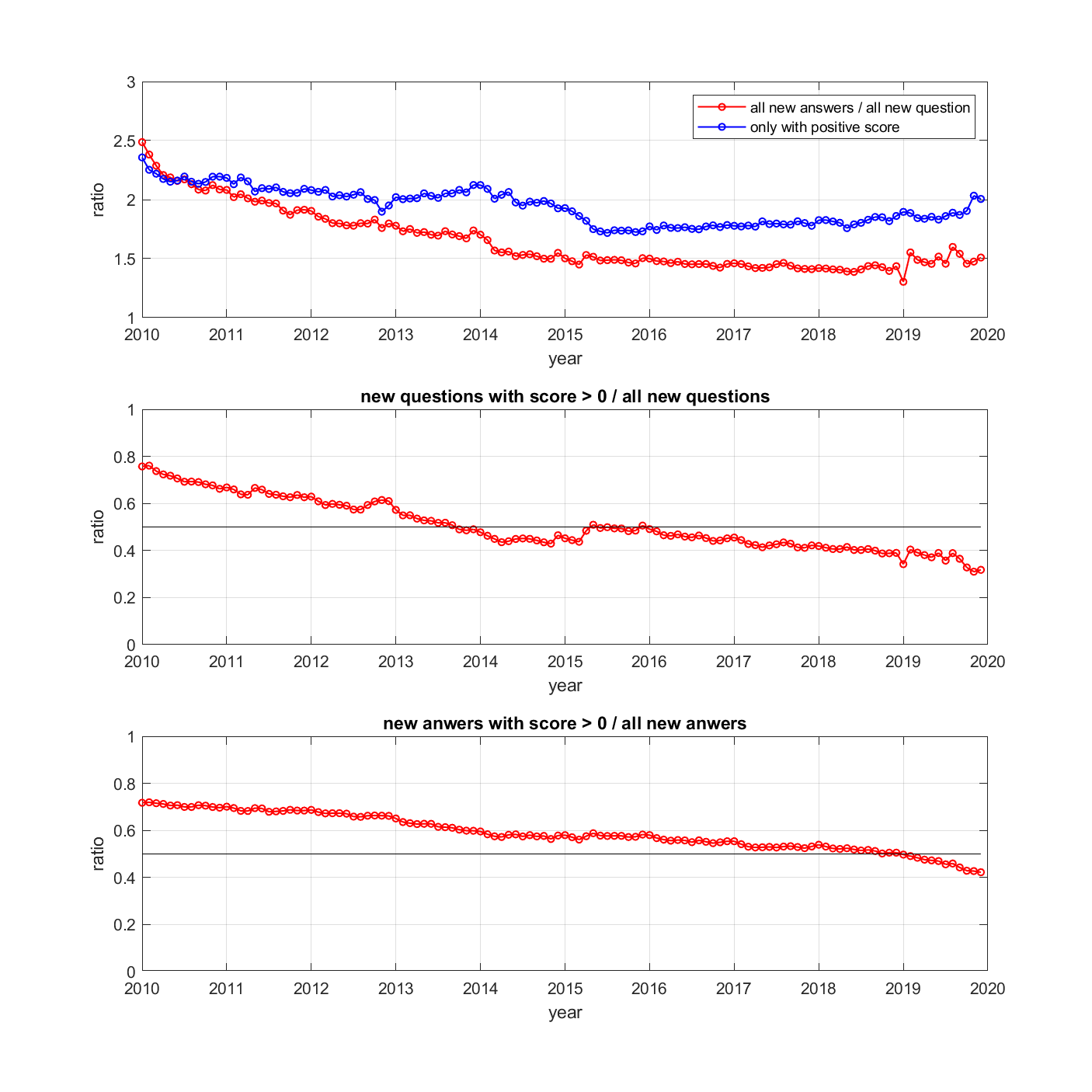 It seems that the ratio of answers to question roughly stays constant, in particular when only looking at answers and questions with positive scores. That means that the number of questions and answers both go down equally.

The question is why these fractions of positively received new questions or answers decreased steadily over the years?

So what is a likely reason and can it backed up by statistics maybe?

I searched on meta with search terms "decrease question answer rate" but only found Data science time! December 2018 and answer voting and that only looks at a short time period in 2018.

I don't have any data to back this up, but with how many duplicate closings I do any given day I'd say the reason you are seeing this is because Stack Overflow has basically succeeded.

If you have a question and you're willing to do some research then you really don't need to ask a question anymore. I'm kind of an example of this. I've written code in Crystal Reports, SQL, C++, C#, Java and Python and I've had numerous questions, but I've only actually asked 5 questions on the main site. The reason? I ask Google what I want to know, and generally 10-15 minutes later I have something I'm happy with and it's normally from a Stack Overflow Q&A.

Basically, we are in the long tail. There are not as many good questions to be asked, so fewer questions are getting upvoted. There is also the case that many highly duplicated questions get downvoted these days because they are trivial to look up but aren't, which is wasting our time.

This answer may be bad because it is based on experience instead of data. But still:

In the tag I frequent most, Java, the quality of questions and answers seems to steadily decline for some time now.

New users tend to post more assignments without any attempt or research, low quality posts that repeat text to get past the quality check, and questions that have been asked a bazillion times before (I'm looking at you, NullPointerException, String#equals and pyramid printing patterns).

Even with the necessary close vote number changing from 5 to 3, questions that are low quality, duplicates or off-topic often don't get closed fast enough, so they collect (again, often quickly drafted or low-quality) answers.

I don't know about other tags, and, like I said, this is not backed by data, it's just my observation. So, yes, I believe the quality is declining.

Older questions and older answers by definition had a longer time during which they could be acted upon: voted up, voted down, edited, closed, deleted, protected. These actions can skew the results you see on the plots. In fact, voting, editing, closing, deletion, protection, etc are mechanisms carefully designed and optimized over the years to increase the value and quality of questions and answers. (EDIT: after posting this, I noticed a comment above from @MartijnPieters, where he says something similar, so the credit for the time effects should go to him.)

Any analysis of quality should start with validating by human curators any of these easy to obtain, SQL-based so called "quality" metrics. Otherwise, the data are subject to a massive selection bias.

The trends shown can be detected over a short time period, such as a year, as can be seen on the plots. An obvious and not too difficult experiment, for users with enough reputation, is to measure quality trend over the recent 12 months, in a double-blind way by randomizing questions and answers, including the closed and deleted ones, stripping dates, and having actual human experts rate them.

It could be [...] that the quality of questions and answers alike have decreased.

It could be... But the data does not exclude a much more obvious explanation. The fact that the rate of decrease of the so called "quality" is about the same for both questions and answers suggests some confounding effect common to both of these. This confounder is most likely selection bias due to different time periods available for quality improvement by voting, editing, closing, deletion, protection, etc.

Q: What selection bias? Most of the voting occurs soon after posting.
A: I vote on old posts if I find them useful (or not). I also edit them. I doubt I am the only person doing so on SO. Just look at the late queues!

Q: I still do not believe in selection bias. Show me the money!
A: Watch the new questions on SO (or any SE site) closely. You will likely see a lot of questions downvoted or not as upvoted as they could have been with comments such as "[possible] duplicate of <insert your somewhat related 2012 question here>". Note that the new question could be legitimate, and thus it is not actually closed as a dupe. It just hobbles on to become one of those 0 or -1 scored questions - all because it sounded vaguely familiar to someone. Meanwhile, the 2012 question will live on and might even get upvotes due to the link in the comment under the new question.

Q: What about the effect of X on quality?
A: Yes, most likely I overlooked a ton of other mechanisms by which quality changes with age, both up and down. Comments may have a positive effect. Also, search engines are probably more likely to show earlier posts due to them more likely to be linked to from other sites (although the better search engines may correct for this effect). In fact, I often have to limit Google search results to the recent N years to remove the earlier questions (sometimes massively upvoted back in yonder times, but now outdated due to new software releases).

This is only a guess, I can't even begin to come up with how to pull up data for it, but my general theory on why this is happening and why there's been such a push over the past few years for people to ask more questions, is that as more questions are asked and answered, there are less unanswered questions to be asked. Therefore, there needs to be a larger and larger input of questions to overcome the worsening signal/noise ratio year over year.

Of course... a simpler alternative would be to just hide the problem by alienating the people who care about quality and thus reduce the amount of low quality posts that end up showing up as low quality posts.

The Wikipedia effect. Most of the good questions have been asked, increasingly gate keepers try to narrow scope and mark everything as a duplicate if it's vaguely similar to one of the thousands of previous questions on the topic etc.

1147
I am resigning as moderator on Stack Overflow
50
Data science time! December 2018 and answer voting

26
When/Why a question with accepted answer and more answers is deleted?
9
What is the best way to deal with people asking many zero-voted questions?
38
Can we upgrade the Roomba to automatically delete poorly received answers?
88
Why is the quality of PHP questions, on Stack Overflow, in decline?
10
Could we have some statistics on duplicate questions which are then deleted?
50
Data science time! December 2018 and answer voting
0
Is it time to rethink the rules regarding duplicate/signpost questions?
33
Seeking Canonical: Non-returning PHP Recursion