Are we too ferocious?

About this question: https://stackoverflow.com/questions/59754747/how-to-compare-time-in-php (question screenshot)

Yesterday a question has been asked by what seemed to be a new contributor. Granted the question was not of the highest standard, but it was quickly closed as a duplicate of what seemed to be an unrelated topic. We have asked for clarifications in the comments and OP has been helpful and confirmed the exact requirement they had. Albeit uncommon requirement and most likely an XY problem (it could be solved in a different way), the question which OP had at the time could easily be answered.

Soon after the last comment was posted the user disappeared, which leads me to believe that they deleted their own account in rage over our behaviour. Were we being unpleasant towards OP even though they were clear and cooperative? 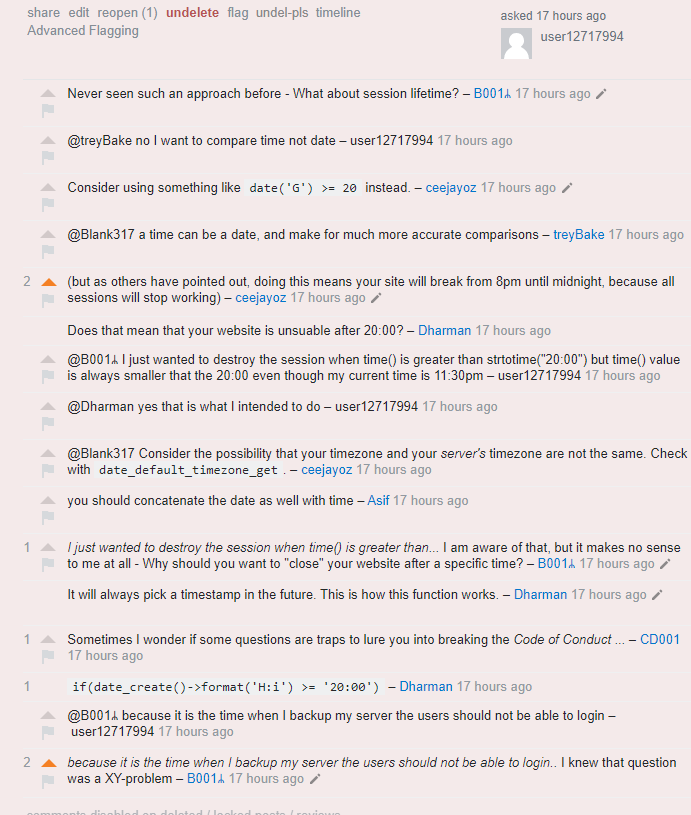 I see two comments that do not ask for or offer clarification:

These comments are not offensive per se, but they are not nice nor helpful. They should not have been posted and not have been upvoted, but once they were there they should have been flagged and removed instead.

If those two comments, and the duplicate vote (which definitely is correct), and the downvotes chased the OP away, then that's their loss, because this question is not an addition to the site, as it has been asked and answered plenty of times before. In all of its variations, the linked duplicate is not the only one that deals with this subject.

The user should have showed more effort, then they wouldn't have been downvoted.

So no, I don't think "we" are too "ferocious", but there's still plenty of users who think they're funny or edgy when they aren't.

Not the answer you're looking for? Browse other questions tagged discussion specific-question behavior .

64
What do you do when a question gets hijacked for a bounty?
43
What is the status of Stack Overflow Cities?
3
Are there times when a duplicate should not be marked as a duplicate?
58
How to deal with users who are being abusive on valid criticism?
2
New Contributor indicator showing on user account after old question has been closed
1
Is it unfriendly or unwelcoming to point out that the OP is being rude or unreasonable?
65
What should I do about an experienced user with a history of asking bad questions?