Is the number of duplicate accounts on the uprise?

Something I had done previously is raised custom flags about these, but (for lack of better words) I'm getting tired of doing these, and also I'm not sure how well received they would be. I suspect the reason that these people are raising these questions on different account is because of a question ban, so they use a new/different account.

I know there is nothing wrong with having multiple accounts, but an important thing about them is that the accounts do not interact. Surely something like this counts as a kind of interaction; "I didn't receive the answer I wanted wanted, or it was poorly received. I can't ask a new question, so I'll use a different account to continue or recreate the thread". Is this opinion correct?

Custom moderator flags for things like this can literally take days to be resolved (this isn't a rant about that at all), and these (almost always) low quality questions are then answered and then OP "gets" what they want. Is there something better we can be doing to combat what is effectively an abuse of the system?

Like I mention in the comments of the first question I link to, I feel that often us answering these qusetions is actually a disservice to the user. If they don't understand the previous answer they got, then why are they not asking about it? Why are we (the Community) not trying to educate them so they can expand on the answer. Though, I admit, some of the users are probably asking the question (demanding the answer) out of a sense of "entitlement", and they will never try to or want to learn.

These are just examples I see, and I stick exclusively to the sql-server related tags (I dread to think what this is like for those of you who have a larger skill set).

Many of us are aware that the quality of posts on SO is sinking very quickly, and posts and actions such as these are really not helping the situation. I don't want to be "policing" the problem, but I also don't want to reading the same question 2/3 times a week, and of the same low quality it was last time. it does not make for an "enjoyable" experience on the site.

Edit: When I can, I do "Gold Badge" these, however, because many are low quality they don't get an answer or not one that is marked as the solution or upvoted. Also, as they aren't the same account, I can't mark them as an exact duplicate. This means the only option is a custom flag, if i want to take some kind of action; as the previous question(s) won't be valid duplicate candidates.

There are a few different heuristics we can use to detect duplicate accounts. I picked one that minimizes false positives: 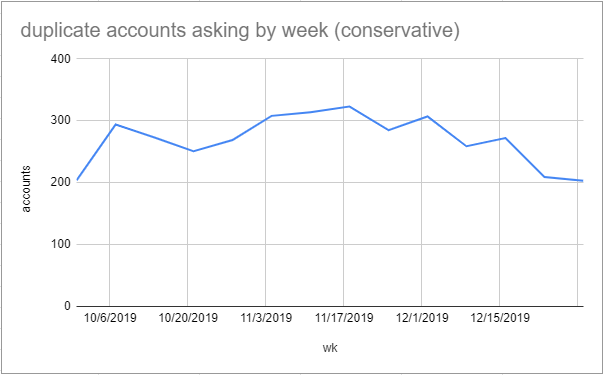 ...and another that minimizes false negatives: 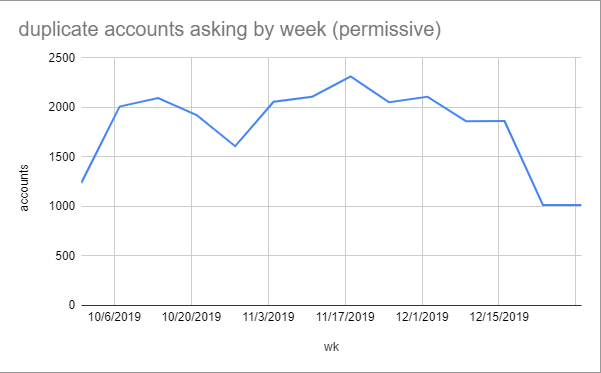 (if you're wondering: these are sloooooow to gather, even for just a quarter...)

So, short answer is: the high point for this quarter of 2019 was in November (none too surprising); current volume is down a bit, but will probably rise as we get a little further into the year.

1
Tags [sock-puppets] and [duplicate-accounts] have the same meaning
3
Merging two accounts: may this be considered serial upvoting?
35
Suggested edit by same person different account
47
User with 2 accounts editing own posts
15
Should I create a separate account for non-technical SE sites?