How do I edit Roles on Stack Overflow Job preferences?

I don't seem to be able to add new Roles to the Roles box. I've found a list of roles that should be available, and typing things that look like they should match don't seem to do anything.

I would have expected an experience similar to this one for tech preferences. Fwiw, that interface does work for me. 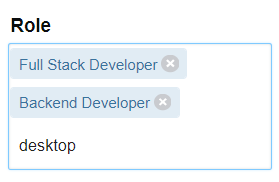 In the above image, I'm typing "desktop" for "Desktop developer jobs", but no pop-ups appear, and when I tab away, the typing disappears.*

Maybe I can only have two roles max, but without a note saying as much, I'm afraid if I remove one, I'll have one less than I have now and still not be able to add anything.

Not sure if [bug] (should see something) or [user-experience] (can only have two, but no cue that's the case). Have both tags currently.

There is a limit of two, which will now be shown above the input field.

Previously, it was shown in the placeholder which was hidden when you selected a value.

Not the answer you're looking for? Browse other questions tagged support bug status-completed jobs user-experience .

4
Save career posting for later and filter by experience required
9
My Job Matches don't make sense
9
Disconnect and confusion between job search filters and job match preferences
-1
Jobs, search on a tag as such - also perhaps a bug?
3
Number of new jobs associated with a saved search don't update across browsers
3
Inconsistent search results for job alerts
103
Can I find a job on Stack Overflow as a self-taught programmer with no professional experience?
113
Stack Overflow Jobs Update - August 2018