Why was I just awarded a bunch of “Announcer” badges?

My "new achievements" grail recently alerted me that I received 36 Announcer badges today. I'm pretty sure I didn't just have 25 people hit all of these shared links, and I'm not even sure these are links that I've shared.

Below is a screenshot of my inbox. Note the scroll bar depth and the number of sites. These are all from today — recently, I believe. 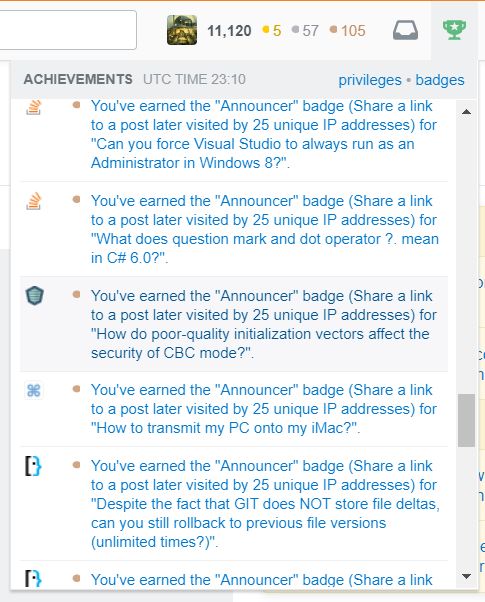 Is this a bug? If so, it's probably not limited to Stack Overflow.

There was a bug in the original logic for awarding "Announcer" badges, which was fixed today.

I've explained it on the global Meta site, but I'll copy my answer here:

Thanks for reporting this. The query was broken and has been for a little while. It should now be fixed along with some improvements to it.

The original queries the sharing badges, Announcer, Booster and Publicist, were supposed to count the total number of unique IP Addresses that visited from a link shared to a question.

In order to calculate this we would use the PostId from the link shared and join back to the Posts table to aggregate the total visits under each question. This process worked great for questions shared, but as you found out there was an issue when answers were shared. There was a bug that was introduced into the code during an earlier optimization that wasn't properly looking for the ParentId when an answer was shared. As a result, answers were not being included in the awarding of badges.

After a lot of testing this week, we determined that the easiest and most efficient way to fix this is to award these badges based on the PostId that is shared instead of basing it on the question.

This means that if you share a link to a question, an answer, or even multiple answers on the same question that is then visited by enough unique IP Addresses you could receive badges for any of those shared links, so you technically could be awarded multiple badges for the same question.

The badge descriptions have been updated to say

We are also in the process of awarding the badges with the new queries, so you might get some notifications in your inbox.

With the change in the logic it does mean that some users were awarded badges that would no longer qualify - since we're no longer aggregating up to the question. These numbers were very small, so we are not going to be revoking any badges due to the change in logic.

Not the answer you're looking for? Browse other questions tagged support badges notifications global-inbox .

54
Why is the Mortarboard badge not removed after serial upvoting reversal?
61
Why are obsolete/retired badges still being awarded?
2
Why did my badges just disappear? Is it a bug?
23
Does Stack Overflow store URL referral data anywhere publicly?
3
Different user on chat than the main site
12
Why was I awarded the taxonomist badge?