Recently I have been seeing many new questions abide by the first list item in Step 1: Draft your question, however those questions also fail horribly at the second two list items.

While unfortunate, I do believe that it is still progress, just that there needs to be an iteration on it.

Here is generally how it seems to play out:

The problem from the community perspective is now they have technically posted an on topic question, but it is poorly researched. It probably wont be closed, but it will garner several downvotes for lacking research.

From the asker perspective, I believe that the second and third expandable items are not being actioned during question drafting (creation) and as a result they are not really being adhered to enough. This could easily be tested by collecting click rates on those expandable items.

A tenet of asking questions is including research, heck, it even says "this question does not show any research effort" right on the downvote button. The guidance to support that requirement needs to more prominent.

There are two easy ways to increase the prominence of the guidance being given.

The hidden material is so small and compact, yet so useful, it really shouldn't be hidden. When fully expanded it does not reach below the space reserved for asking the question.

Here is a side by side comparison 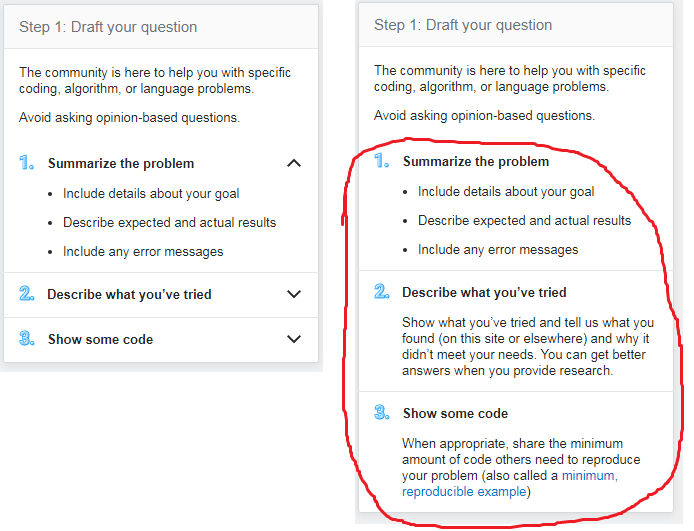 Perhaps this could be an A/B test, or maybe this method is preferable since it ensures that the content was seen.

Collect the button expansion clicks on page during user interaction, and send them along with the question data to review; if one of the sections was not expanded, it would show up as a required issue to resolve.

In red, the non expanded sections could be included below the "Your question couldn’t be submitted" note. 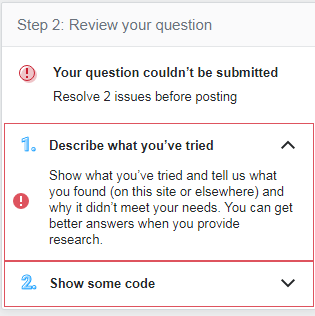 This would then force a review of the guidance prior to submitting the question, or, at the very least, highlight the section to the user. It would also provide a data point to look at for question quality in the future; do users who are forced to review a bullet point have a higher propensity for question closure? Lower vote score? etc.

In addition to including the prominence of the guidance, I think that the research note is slightly understated. While it is true that showing research will get more answers, it is also deceptive (albeit unintended) because it doesn't inform users that without research they will probably get no answers and probably get downvotes.

Show what you’ve tried and tell us what you found (on this site or elsewhere) and why it didn’t meet your needs. You can get better answers when you provide research.

This should perhaps include a nod towards the downvote verbiage. Something along the lines of

Show what you’ve tried and tell us what you found (on this site or elsewhere) and why it didn’t meet your needs. You can get better answers when you show your research effort.

Let's do a minor iteration on the Question Draft page in order to highlight the need for showing research when asking.

37
Help askers find duplicates before the question becomes public
2
Stack Overflow doesn't retain list item numbers in quoted sections
167
Make the "must be accompanied by code" warning more direct
98
Show Google results before user can post a question
224
Make Stack Overflow more friendly: remove the stigma of duplicates?
123
How can I make sure the question I'm going to post is not going to be duplicate?
16
What's the best way to post a "How to ask a good question?" article for a specific subject?