Is there a reason why on Teams sites the "Downvote" privilege requires 125 reputation?

The is a is useful mechanism for more discussion based teams (i.e. moderators) - and requiring 125 rep seems to remove the ability to participate for a number of users: 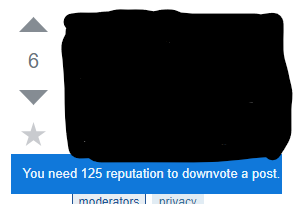 Couple this with the fact that downvoting isn't even shown on the Teams privileges page at all (no privileges above 75 rep are shown on those pages) it seems like there was an oversight there.

I appreciate that setting bounties requires 75 rep so that you have some rep to give, but as downvotes only cost 2 rep, shouldn't this be allowed sooner?

Note, apparently "a CM has already asked questions about it (not a meta post though). They're aware of it, and they're on it.", but raising here for visibility and tracking.

This is by design although I'm not sure why we landed on 125 reputation. I've added that limitation to this help article, https://www.stackoverflow.help/support/solutions/articles/36000042869-reputation.

Not the answer you're looking for? Browse other questions tagged bug status-bydesign stack-overflow-for-teams .

10
What are the rules for reputation and privileges for Teams?

39
"Boss...here's why we need teams" feature needed
23
Tooltip regarding private team should fill on top of upvote downvote in Teams
6
Stack Overflow Teams has a bug in signup process
4
I can react on my own post in Teams
28
Why is Teams not accessible to me?