Custom Flag Declined Without Explanation - Why?

First and foremost: I'm not trying to be in any way 'narky' about this - just looking for information and/or guidance.

Second: I recently posted this (incorrectly) as an 'answer' to a very similar question! I got over that, so here I am (again), looking for guidance (gentle preferred, any accepted)!

So, I recently came across a post on Stack Overflow, during a Review Queue, on which there was a number of seriously dodgy issues. Here's the link (though it's been removed by moderators). I used the "Custom" flag to alert mods to the fact that the poster had already stated, "I know this will be removed" and, also, that he had posted an email address, which had then been edited out, and he then commented adversely on that edit. I flagged this as, "possibly needing direct moderator interaction with poster" because, being relatively new here, I wasn't sure what else to put.

The flag is now "declined" but with no explanation as to what I should have done. (But, of course, post has been deleted - see footnote!)

Another custom flag I recently made was also declined (and, BTW, I have no problem with that) but, in that case, a brief (but sufficient) explanation was given: It was a foreign language post, and I was advised to use "Unclear what you're asking" - no problem, as I'm on a learning curve.

For a newbie, I have a pretty decent 'flag weight', I think; however, I want to be as helpful as possible to this community, so any advice as to why a flag is declined would be appreciated.

Footnote: The (exact) content of my 'custom flag' message:

The poster already knows/states that the post will be removed! He has also responded to an edit that removed an email link. I think this probably needs 'direct' moderator interaction with the poster.

As I said, I'm quite new here, so wasn't sure of the exact syntax/language/request I should be using.

Footnote (2): I've also noticed that the user account in question is now 'deleted' (non-existent)! Could be self-imposed but, considering there were other posts associated with said user, it looks like moderator 'interaction' to me.

Here is the question in your Triage review: 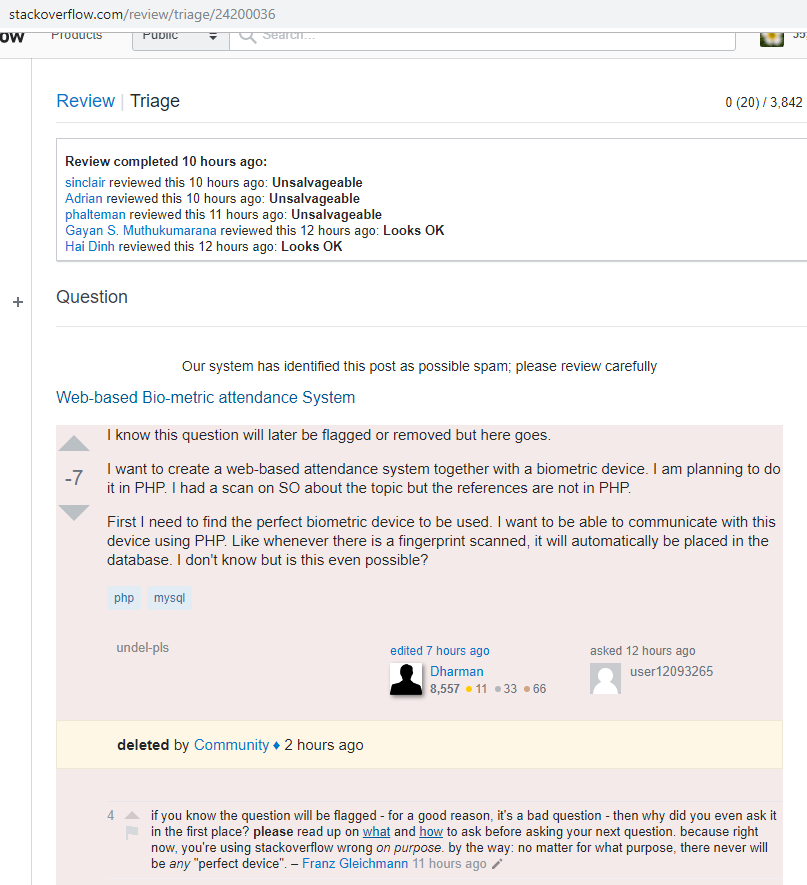 There is nothing on that question that we can't handle ourselves. Flag for closure, unclear / too broad/ off-topic - resource request, would all work. Cast a down vote so the next visitor doesn't go wondering what is awesome about it.

If you have the slightest idea the question could have value you could have gave it an edit by removing the meta noise from it as you have full edit privileges. Don't involve mods if it is not needed.

If you still insist you want to take a gamble then don't give the mod an option to decline. Instead of:

"Please close and delete this question as it will not have value, even if answered. I don't have close or delete privileges but it might not be obvious for regular reviewers that this post is not good"

Now I still doubt if Jon Clements would fall for that but if you run into one of those deletionist mods you might get lucky ....