Did I get this privilege before I had enough reputation?

This morning, I awoke to see that I gained the "create tag synonyms" privilege - which is usually awarded at 2.5k rep - but I only have 2499 rep, and I can't see anywhere that I would've gained the 1 rep and then lost it again.

Below is a screenshot of what I mean: 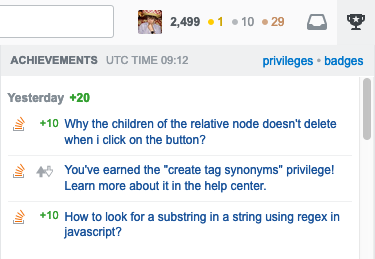 When I logged out yesterday, I believe I had 2489 rep (after answering and getting an upvote on the regex/JavaScript question).

Did I get this privilege by accident? I'm not complaining that I have it early, just wondering how.

Currently, with your reputation at 2499, you do not have the privilege.

As explained in the FAQ, if your reputation is once above the threshold, you will be shown the message. It's also shown only once, so if you cross 2500 again and get the privilege, you will not be shown it again.

There are events that can cause reputation changes, but aren't shown. That's explained in an FAQ (I only quote in full what I think might be most likely the reason):

My reputation dropped, but I don't see anything listed!

This can be caused by one of several different reasons:

3
I got access to the 'trusted user' tools privilege before attaining 20000 reputation
1
Does StackOverflow use only upvoted reputation for assigning privileges?

5
Earned "down-vote" - with not enough reputation
46
Why does the "You earned the privilege" achievement not disappear when I lose reputation?
18
Did not get all reputation points from answer
2
"Talk In Chat" privilege without enough points