Can we change the [overflow] tag away from its original meaning of CSS?

I'd like to start by saying that it's very difficult to find posts about the overflow tag, since it's a needle in the haystack of discussions about "Stack Overflow", so pardon me if this issue was already discussed in the past.

The reason for my post is that I was trying to tag a post about "floating-point number overflow" appropriately. When typing "overflow" I got the suggestions below: 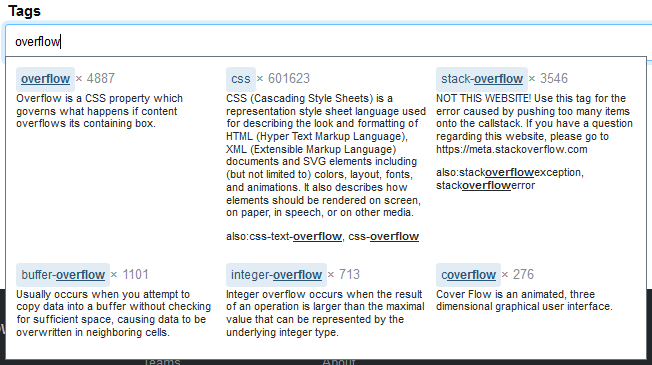 I was faced with a choice between integer-overflow (which is only partly relevant as it deals with a different sort of numbers) or overflow whose excerpt, as of now, says:

Overflow is a CSS property which governs what happens if content overflows its containing box.

One might notice that css-overflow is a synonym for css, which indicates that the community didn't think it was necessary to have a separate tag for overflow in the context of CSS. I would argue that a post tagged as css+overflow would define the topic adequately.

I suggest making overflow more general, by removing its absolute focus on CSS and suggesting users to provide "additional tags" to better identify the context, as is done in many similar cases.

Since there is already a synonym for css-overflow, then in theory we should get rid of overflow. It definitely meets the burnination criteria:

Does it describe the contents of the questions to which it is applied? and is it unambiguous?

No, it is completely ambiguous.

Is the concept described even on-topic for the site?

Does the tag add any meaningful information to the post?

However, it is 4887 questions having this useless tag. Probably not worth the effort. I'd say let it be.

I want to add that the overflow tag has been, and it is used incorrectly to indicate integer-overflow or buffer-overflow, as shown here.

I suggested several retags, that have been approved. Considering this, I propose to burninate it.

Not the answer you're looking for? Browse other questions tagged discussion tags tag-disambiguation .

15
What purpose does the tag [stackoverflowerror] serve?
38
Separate the CSS2.1 tag from CSS
23
No need to pay [attribute]
3
Do we need separate tags [triangular-matrix], [triangular-number], or do we overload [triangular] with those meanings?
97
The [relative] tag has been burninated
17
Trogdorbots, [transform] and burninate!