Should I flag a mod-flag if a user advises (repeatedly) that askers take questions to other sites of the network, erroneously?

I've encountered a user (by virtue of seeing their comments in questions on the close-review queue) that with some consistency votes to close many questions with a custom reason reading something like:

I'm voting to close this question because it's about [foo] and should be asked instead on [foo].stackexchange.com

Sometimes the comment comes after the VTC, not necessarily with the custom close-vote.

This user has been approached more than once, including by yours truly, about stopping this practice, but they haven't. I've seen this kind of comment about different sites in the network, although I'm not equally prepared to say if they are equally inappropriate for all the suggested sites.

Would something like this be reason to raise a custom mod flag and let our exception handling team take a look at the situation and talk with this user or should I just let it be?

TL DR
So if a user is regularly writing comments recommending users post on another stack exchange site and they do not appear qualified to make that suggestion, by all means do raise a custom mod flag and we can have a word with them.

Unfortunately (as now this is confusing), I would encourage you to raise a custom mod flag if you see this type of repeated comment, with the following caveat:

Check the user's profile and see what communities they belong to. 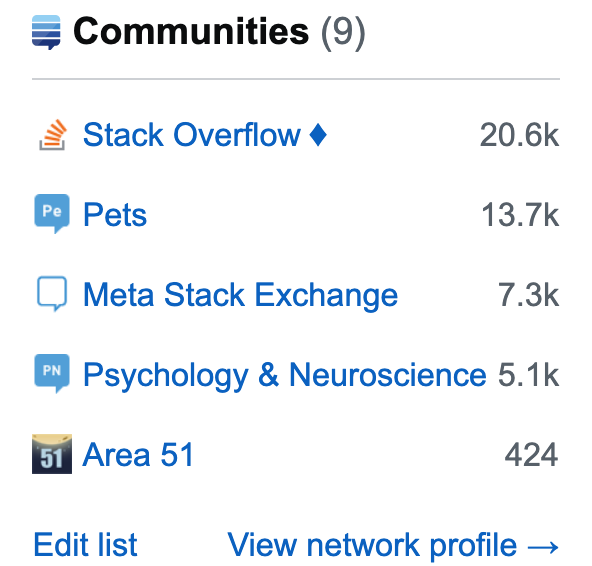 When handling migration flags, generally, I check the flagger's profile for their activity on the target site. I'm not an expert on the other sites. I have had a fair bit to do with the folk on Code Review and will ask them there if they want a question. More often than not they say no. It's up to them, they're the experts on their site. They don't like it when we migrate off topic questions to their site.

The active members of potential target sites know if a question is a good fit or if it's a duplicate. It takes a fair bit of time to work out if a question is on topic for that site, by asking mods or high rep users on that site, so unless the flagger is a high rep user or a mod on the target site, I generally decline flags to migrate posts. With the exception if I think it may be a good fit for Code Review and I go and ask them first.

The other option is to leave a comment for the user leaving these comments - if you feel brave, you can do so, linking to this answer. If they argue with you, raise a custom mod flag on the comment and let the mods step in.

For clarity, when people are drawn to this post, from What is migration and how does it work?:

I should add, that likewise with migration, sending people off to other sites is still potentially sending poor quality posts there. It's important people are familiar with the target site, what type of questions they accept and whether the question is well formed for that site.

We don't expect Stack Overflow users to be experts of other sites; and counter-intuitively we couldn't judge whether they're right or wrong anyway. Even in our own migrations, there's an expectation that the target site may reject a question if it's off-topic there, and that's OK. Since saying "this should be on another site" when it shouldn't is 'wrong', the question is actually: "Should we flag when someone gives bad advice in their comment?". Put that way, the answer becomes clear:

No, because you're asking moderators to make a value judgment on comments, and we can't adjudicate comments based on value judgments. 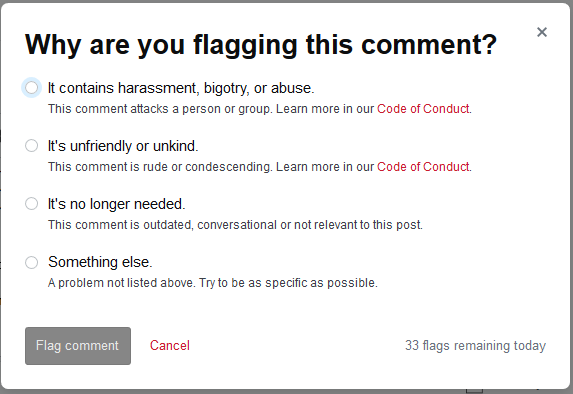 There is a 'Something Else', but that's generally used to indicate multiple comments needing cleaned up.

A better way to handle it would be to address the comment with why you believe that comment to be in error. That way if the user flags the post for a moderator to migrate it, we have someone who hopefully knows better than we do to indicate reasons why it may not be a good question to migrate.

48
Could we have comments stating, "This would work well on Code Review" and similar eligible for instant deletion?

62
Auto-comment close votes for all close reasons
4
Closing an off-topic question that is not on-topic anywhere
51
Does being on-topic at another Stack Exchange site automatically make a question off-topic for Stack Overflow?
16
Should we add an off-topic close reason to specifically address legal requests?
54
How are the sites that appear in the "belongs on another site in the Stack Exchange network" dialog chosen?
19
Cross your fingers and VoteToClose, or let loose the Roomba?
29
Custom mod flag declined on user answering question that they voted to close as off-topic
113
Question Close Updates: Phase 1