Is Teams a free product for teams with fewer than 11 members?

I hope this is not too dense a question.

I read a few questions regarding Teams pricing:

But when I get to the pricing page I now see this: 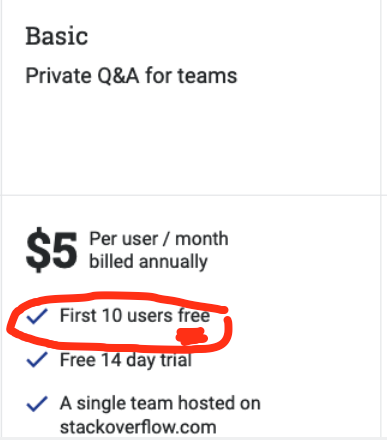 Has the pricing structure been updated again, and is "Basic" now effectively a free product if you have less than 11 users on the team, and you would only pay from the 11th users onwards?

If the answer it's simply "yes", my apologies for the dumb question. The product already went a couple of pricing changes since its inception, understandably, and what I thought I knew does not seem to match what I read now. I'd like to know if I'm not misinterpreting things.

Yes, Stack Overflow for Teams is now free for up to 50 users, forever.

This is not a pricing structure change, but rather a special promotion running only for the month of September, after which the first 10 users free promotion will disappear from that page.

If you create a Team during September, you will not be billed at all for the first 10 users on the Team for as long as the Team is active*. You will start getting billed $5/user for the 11th user onwards (when billed annually), immediately once an 11th user joins the Team. So if you have 10 or fewer users on the Team, your bill would simply be $0 (note though that we still require a valid credit card to be entered regardless).

This promotion only applies to the Basic plan; it does not apply to the Business or Enterprise plans.

Also keep in mind that the 14 day trial is a completely separate concept. The entire Team, no matter how many users join, will always be free for the first 14 days.

* Active simply means that the Team still exists and hasn't been cancelled.

Not the answer you're looking for? Browse other questions tagged support stack-overflow-for-teams pricing .

313
Introducing: Channels - Q&A For Engineering Teams
420
Coming Soon: Stack Overflow For Teams!
12
Spelling Errors on Free Teams Offering Dialog
13
Teams for free so why is our renewal 120$?
11
Will "Free 10" promotion Teams be charged for SSO?
13
How do I delete our free Stack Overflow teams account?