Is this a bad review audit? If not, what am I missing? [duplicate]

I recently failed this review audit, however I don't understand why: 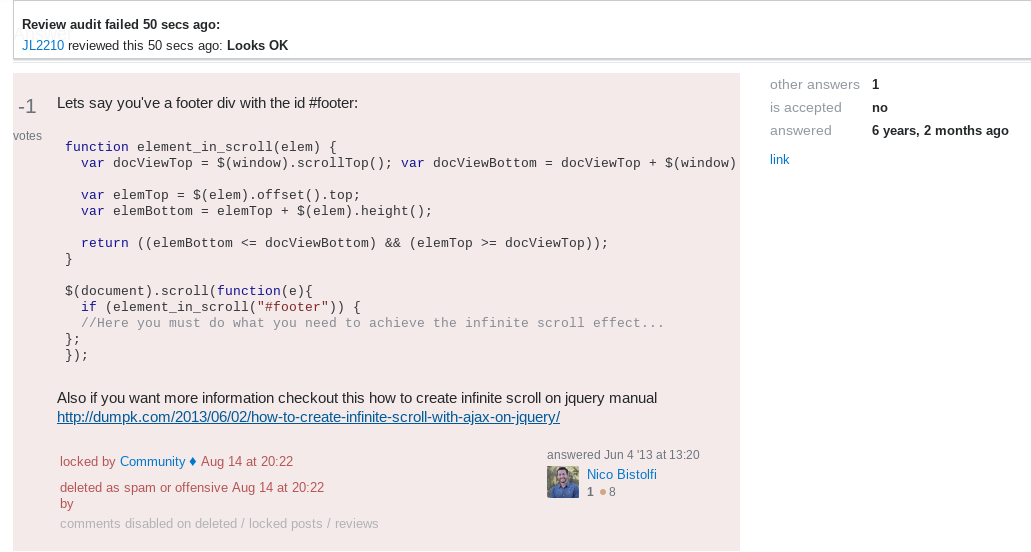 The answer seems reasonable. It provides an answer to the question and a link for further reading. It's not a spam link, I followed it (after failing the audit) and it's a legit tutorial. It's also not a link-only answer, because it provides something around the link (including a code example). It's not a great answer, but it doesn't have anything in it that strikes me as "spam" or "offensive".

Is this a bad review audit? If it's not, what did I miss?

This does seem similar to this question, but it's a different review audit and I could just be misunderstanding something.

The post was deleted by a moderator as spam1 and has no upvotes. Thus, the system thinks that it's a valid post to use for a "this is a bad post" audit.

What you missed: Undisclosed affiliation

The linked article was authored by "Nicolás Bistolfi". The username of the OP appears to use a familiar name for "Nicolás" (i.e. "Nico Bistolfi"). The user's profile indicates they use "nicolasbistolfi" on both GitHub and Twitter. The profile states that they are the CEO of the same company as is claimed by the author of the linked blog. As such, I'm satisfied the OP is the author of the linked blog.

The OP does not disclose, in the answer, their affiliation with the site they've linked. Thus, the post contains a link with undisclosed affiliation. As a result, it is considered spam, under the definitions we use on Stack Overflow/Stack Exchange (please see: How to not be a spammer, What signifies "Good" self promotion?, , What is the exact definition of "spam" for Stack Overflow?, and What makes something spam).

[Note: the element_in_scroll function is also directly copied from the linked blog entry. The copying brings up plagiarism issues, if the user is not also the author of the blog. Even if you're the original author, it's usually best to be explicit that you are copying your own work, as that makes it such that there's no confusion.]

My personal preference, for users who have one or two posts with undisclosed affiliation, is to inform the user of the disclosure requirement and give them the opportunity to rectify the lack of disclosure. I'm much more interested in doing that if the content is good and actually addresses the question. I'll usually leave a comment and schedule a revisit to the post a day or two later to see if they've edited in disclosure. A reasonable number of users respond well to such comments and edit their posts to include disclosure.

Given that a moderator deleted the post, and the user has at least one non-deleted post where they linked to another article they wrote (they did disclose affiliation in that one), I suspect that there may be some additional deleted posts by that OP which also contained undisclosed affiliation, or that the moderator had more information than is available to non-moderators now.

16
I failed a review audit for a "spam" false positive
10
Review audit failure... and no, I don't understand
7
Should this (partial) answer be an audit in the Low Quality Posts Review Queue?
9
What was the "severe quality issues" in this LQP review audit?
23
Was this audit wrong or am I missing something?