I've restarted using the review queue in my profile to help moderate Stack Overflow. When I use the review queue I've found that some of the questions I get are so far out of my topic of knowledge - so all I can do is Skip. Is there a way to map queues to the user?

For example, if most tags I am active on are python and c++ where my knowledge is more pushed for Python (judging by my answer acceptance and votes). But in most of the queues, I get answers for Linux and PHP which are very rare in my search bar (some random search week ago), or from some languages/topics I've never even heard of.

I think it would be beneficial for Stack Overflow if tags of questions could be fitted towards user. This way there is an credibility to the user, and if a user decides to expand their knowledge, tags should naturally reflect that.

For example, if some user has some number of answers with 10+ votes in some tag, Stack Overflow could prioritise that tag for that user and therefore develop a trusted credibility base.

This way it seems too easy for me to mess stuff up by flagging questions I don't know enough about.

We already have manual tag filtering: 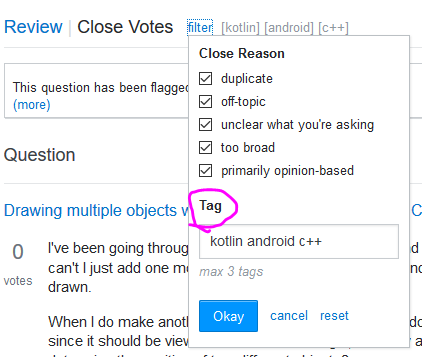 Which lets you filter what you want. AFAIK, all the queues support this.

This way there is an credibility to the user, and if user decides to expand their knowledge, tags should naturally reflect that.

Well, this results in several challenges:

If you're requiring tag score to review posts on specific tags, what about people who are familiar enough with the techs to review, but not necessarily enough to answer or haven't found an unanswered question to ask? Off the top of my head, take Kotlin. Even before I started learning Kotlin, as a Java user, I could personally review Kotlin easily. The terminology is mostly the same, and the principles as well, but I didn't have any score.

I recently got into C++ (I currently have one post on the C++ tag), but I'm nowhere near the point where I can answer high-quality C++ questions. I still understand most of it now. Before I got into it, I didn't - though that specifically applies to question reviewing. Reviewing duplicates and understanding what the question asked was pretty hard. My tag score on C++ is pretty far from my C++ knowledge. I'll also go as far as say that most people don't have tag scores that represent their knowledge.

Even better example for me personally - Python. Most of my use for Python is general. I could probably answer the low-quality, asked a couple million times already dupes, but I don't have a chance of answering the higher quality questions. If I remember tag score calculation accurately, I should have -1 score on Python. I still know it, and I wouldn't mind reviewing Python questions. The tag score doesn't mean I don't know Python and can't be trusted with reviewing.

I think it would be beneficial of the stack overflow if tags of questions could be fitted towards user. This way there is an credibility to the user, and if user decides to expand their knowledge, tags should naturally reflect that.

You can expand your knowledge without posting a single question or answer on Stack Overflow, and naturally have 0 score. If you go by traffic, people like me (who review NAAs through bots or the 10k tools) would end up with, well, everything and defeat the purpose of this feature request.

Also, what about low-traffic tech? Take Brainfuck for an instance. There's about two questions posted every month. There's probably browsers, but likely far from enough active 3k users to handle closure without help from review (or SOCVR). Small techs would more or less be excluded from the main reviewers (and yeah, there are people who don't filter and review stuff in several fields).

Take user Mark Adler for example. Among his most used tags are gzip, zlib,crc and deflate wouldn't it be logical to forward him queues containing to compression and decompression, with custom binary files? (source)

Take Mark Adler for example - they also have over 200 score on Python, over 400 score on C++, and even 40 on Android. Does that mean you plan on suppressing those because there's other tags that outrank them?

Further, many, if not the majority of review tasks don't require domain-specific knowledge. Reviewing duplicates might, but many are pretty obvious. Regardless of which language a question expects answers in, we can all agree:

Write a program that does X, Y, Z, and M using any libraries at hand. Please provide the code.

Further, mistagging happens all the time. Watch the Java and JavaScript tags, and you'll see several questions about JS tagged Java, questions about Java tagged JS, and some questions weirdly tagged with both. You won't affect much - you'll still periodically see questions you can't understand because of technical language with a close vote on "unclear"

Further, very many users don't review at all (which I can't blame them for to be honest). If several users on one tag decide to leave, what then? You stand there with even fewer reviewers on a single tag and the effect on the amount of questions in the review queue on that could skyrocket while the rest is relatively low (depending on traffic obviously).

In the comments, you linked to this question and indirectly asked if it was spam. We have a definition of spam that makes it obvious to find. You're looking for (this is a TL;DR, and not a substitute for the content in the link)

You don't flag questions asking for help with code as spam! Unless it falls under the definition of spam, but that's pretty rare and easy to detect. It might be low-quality and worthy of a close vote/flag and a downvote at times, but it's not spam. Imagine if you asked a question, and 6 downvotes later lost 100 rep and saw it was deleted as spam, or rude or abusive, when you were asking about a function in jQuery.

This way it seems too easy for me to mess stuff up by flagging question I don't know enough about.

Then don't flag it. Filter to see the techs you want, skip the rest. No one is forcing you to review either. Remember: If you're in doubt, there's no shame in clicking skip.

Not the answer you're looking for? Browse other questions tagged feature-request review .