The question was closed as "unclear what you are asking". Why?

I am curious to know why this was closed as "unclear what you are asking".

I would need to match the average score to a letter grade. That means

That's a lot of repetition, and the ranges I'm matching to are of the same length. Is there a more efficient way to do this? By efficient, I mean not having to repeat the if-else statement 5 times

There were 8 answers given, there were hot discussions to the point in the comments. It seems everybody got the problem, except for 3 people who voted to close, the same two voted to delete it shortly afterwards.

It's worth mentioning that OP faced difficulties to add their code snippet.

I tried adding code, but it won't format correctly (I'm new to stackoverflow). The instructions say to type two whitespaces for line break but that never worked...

Their comment was ignored, and the question was closed ignorantly (in my opinion).

The question was closed again as "too broad". Please, put yourself in OP's shoes, and read the explanation

Please edit the question to limit it to a specific problem with enough detail to identify an adequate answer.

The problem was outlined (getting rid of multiple if-else statements). The scope was specific (grading system).

One question was asked.

What exactly could OP improve? No one bothered to explain. It was closed again without letting OP read this discussion, and/or make changes. I love this community :)

It definitely shouldn't have been deleted that quickly if we want to give the OP a chance at redemption, although I recognize a few people in that deletion list who don't view questions like this that way.

If nothing else, it should be closed because it is a duplicate.

This question has been rehashed in Java several times over. The long-and-short of it is that the OP is going to have to write that long-ol' if statement (in older Java versions), but there are ways to make it neater.

At the time the question was closed and deleted, this was its content

Is there a more efficient way to write multiple if else?

I would need to match the average score to a letter grade. That means if 90 < avg < 100 return 'A' and so on until 'F', with 5 if-else statements. That's a lot of repetition, and the ranges I'm matching to are of the same length. Is there a more efficient way to do this? Thanks in advance :)

To me, this is one of those "What does efficient mean?" questions. To get rid of the repetition they mention? It can't be that, the verbose and overengineered accepted answer and some of the others are just as verbose and repetitive in other ways. Somehow more performant? I don't this so either, none of the answers are demonstrably more performant.

Here as some quotes from the answers:

None of the answers these quotes were taken from explain why their solution is more efficient for whatever definition of "efficient" (or trendy) they chose to base their opinion on.

At this point, the question could be closed as both unclear or primarily opinion based.

When you Google the question's title, you find lots of similarly titled questions, most about completely unrelated use cases. I don't see how adding one more makes this useful to anyone. (Maybe someone can favorite the post and let us all know if the votes/view count changes in a year or two.)

You could change the title, but then you would just end up with the duplicates. I don't see any value in keeping this post around and that's why I voted to close and delete.

After the edit, the OP clarified to say they don't want to use multiple if statements. It's more clear what they want, but not why they landed on that choice to solve the problem (XY?). Probably better suited for code review, I dislike it for Stack Overflow.

This is one of those situations where an unwritten rule of Stack Overflow was broken.

Lack of Effort has never been a reason to close, but several of the commenters alluded to that and one said: "Show us the code".

It was then edited a few times and closed and deleted within two hours. 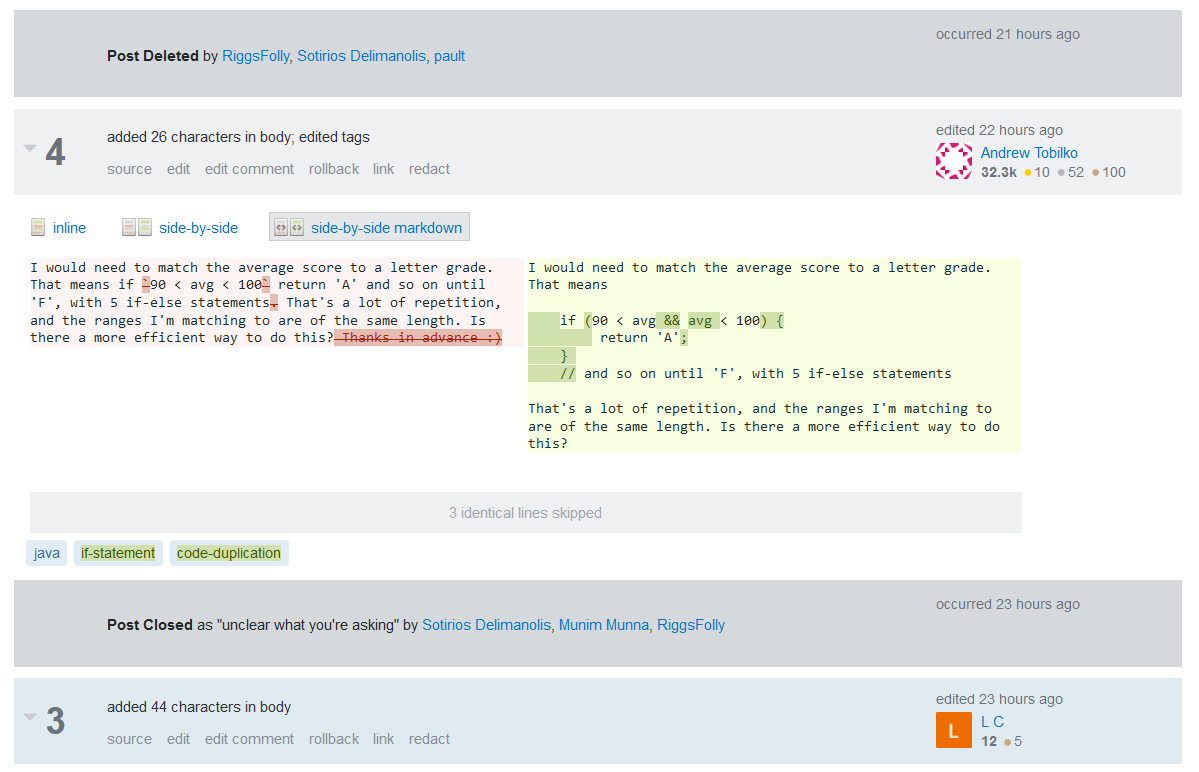 The deleters were on a hair-trigger with this one, and it did not give the OP or anyone else a real chance to make it better. The question in its current form is an acceptable question for Stack Overflow.

People may decide to downvote it for the "lack of research effort" (sigh); but they shouldn't close it for that reason. It's a useful, well scoped question. I think the title could use some work, so I'll see to trying to edit it, but otherwise it's a good question and should be opened.

Not the answer you're looking for? Browse other questions tagged discussion specific-question closed-questions new-users welcoming .

507
Experiment (ENDED): closing and reopening happens at 3 votes for the next 30 days
52
Is "too broad" a valid reason to close a question that doesn't show any research effort?
-3
How can we discourage over-downvoting on questions?
25
Question Effort - What's our line in the sand?
-27
Dear Meta, why are you sacralizing** all answers?
45
Rejected flag about user making useless formatting edits

5
Why are my unanswered questions marked closed as off-topic?
4
Should this question be edited, closed or what?
40
Why is this question closed as "unclear what you are asking"?