Is this a bad review audit? If so, what do I do?

I recently reviewed a Low Quality Post that turned out to be an audit. The answer didn't say anything useful (it was basically just a rant about how the company is ridiculous, etc.).

I failed the audit, but I feel like the post is something that's not going to be useful for future readers.

Here's a picture for posterity: 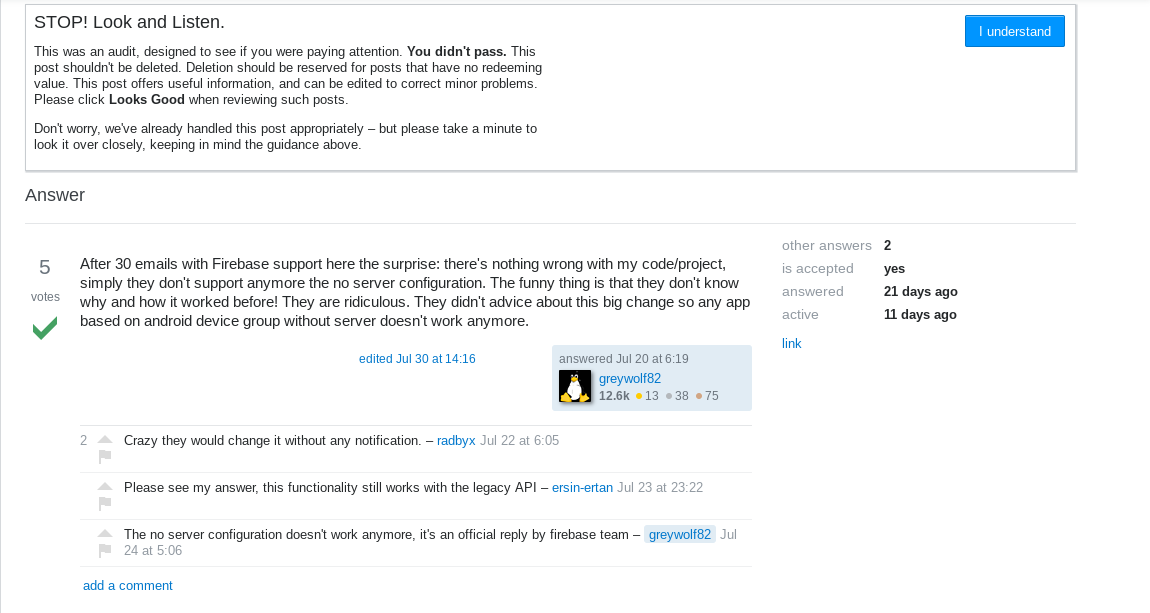 Is this a bad review audit? If so, what should I do about it?

It looks like a perfectly reasonable answer to me - it describes an official reply from support when they were asked about the issue in the question.

(1) Imagine that someone else having the same issue comes along and wants to figure out what's going on. Being able to see an answer saying that the setup they're using just plain isn't supported anymore is pretty useful to know. After reading the answer, one will know that a completely different strategy is needed. It may not be what a reader would want to hear, but it's still definitely an answer. (If the answer was deleted, the issue in question would appear to be an unresolved mystery - which is much less useful.)

(2) Even if there's an answer that doesn't seem to be that useful, in the LQP queue, a reasonable attempt at an answer should not be deleted. The answer isn't nonsense or a request for clarification. If you think an answer is wrong or not useful, feel free to downvote (as the downvote tooltip says), but it shouldn't be deleted from review.

21
Why is this answer considered "very poor quality"?
286
You're doing it wrong: A plea for sanity in the Low Quality Posts queue
-6
Is this question about an error in an IDE really good enough to be a review audit?

61
Reporting a dubious review audit (is this what we should do?)
37
Failed review audit for a post, but it looks alright?
7
Should this (partial) answer be an audit in the Low Quality Posts Review Queue?
9
What was the "severe quality issues" in this LQP review audit?
42
Failed Audit on a page that looks good