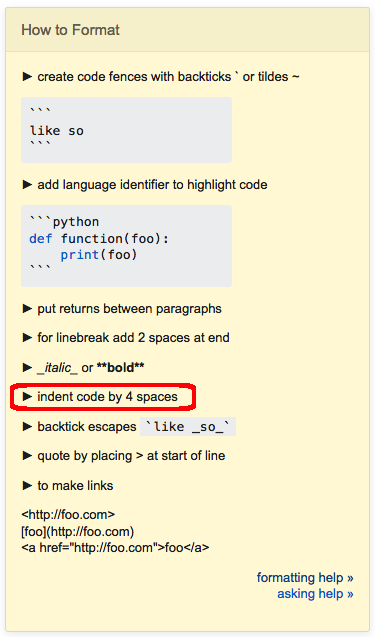 14
Code blocks: spaces vs fences
299
Change the code block button from inserting indentation to triple-backticks
26
Why are posts edited to change the code formatting markers?
50
Should we make the {} button add ``` instead of four spaces?
54
Support CommonMark fenced code blocks
31
Add C++ syntax highlighting for C++/WinRT questions
7
"How to Format" in the "Ask a question" sidebar mentions both ways of creating code blocks, without drawing a link between them

35
Curbing excessive whitespace in front of code
70
Indent 8 spaces when clicking the Code Sample button after a list item
42
Should we approve suggested edits that change ``` to four spaces code formatting or vice versa?
26
Why are posts edited to change the code formatting markers?
299
Change the code block button from inserting indentation to triple-backticks