When should I use the custom moderator flag for off-topic questions?

I've looked over a couple dozen meta posts and none seems to specifically answer my question.

Recently, I raised a flag on a question, Why can't we build in python a JavaScript-like import system? (removed). The question was essentially asking "Why does Python have such a terrible import system? Using [coding method], we could have the same import system as JavaScript!"

I felt the post was off-topic, since, per the on-topic guidelines, the question was not "a practical, answerable problem that is unique to software development." Additionally, as per the don't-ask guidelines, this was an instance of "your question is just a rant in disguise: “______ sucks, am I right?”." While I understand that sometimes subjective questions are allowed, this doesn't seem like an answerable question. As noted in the blog post,

Thus, questions that are not answerable — discussions, debates, opinions — should be closed as subjective.

And nobody can really answer why a JS-like import system has not been created for Python. It just hasn't been created. If someone would like to make it then they can, but there is no reason why it can't be done.

However, when I went to flag the question, none of the available options seemed to fit: 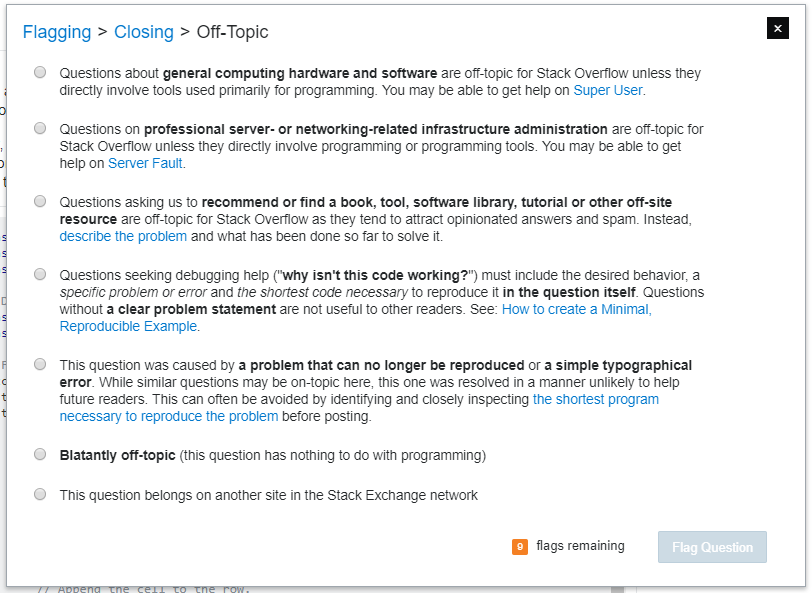 So I used a custom flag:

Should be closed because it's off-topic, but doesn't seem to fit any of the off-topic reasons given above. Complaining about the woes of Python is not "a practical, answerable problem that is unique to software development" as required by the Asking guidelines. – Michael Kolber 20 hours ago declined - Using standard flags helps us prioritize problems and resolve them faster. Please familiarize yourself with the list of standard flags: see What is Flagging?

However, none of the standard flags seemed to fit:

In fact, I specifically mentioned in the flag my reason for not using a standard flag. And, since the mod did not mention anything about the flag being incorrect, I would assume that the post was indeed off-topic.

So which flag should I have used? In the future, how can I know which standard flag to raise when none seem to fit?

Based on the title alone:

Why can't we build in python a JavaScript-like import system?

Don't use custom flags on posts where the moderator would need to be a subject matter expert to judge the validity of your flag. If you do, a good explanation is needed. Yours looked fine but it still is an hit and miss game.

Only use moderator flags to moderate a post in ways the community is unable to do. If you can't come up with a good close reason, maybe it shouldn't be closed or for sure someone else from the community can pick the right reason.

If you need an extra pair of eyes on a post and a moderation advice, feel free to hop in the SOCVR chatroom where the regulars are happy to help out. Before joining do read the awesome page turner we created called the FAQ.

-2
Should I flag if I am not sure if a question is opinion-based?

2
Why is iTunesConnect off topic?
6
Are code review questions off-topic?
10
Off-topic flag declined?
8
Can we have clarity on legal questions being off topic in the help center?
3
Flagging off-topic bounty questions?
20
Why was my question closed as off topic? If that was done correctly, on which SE site should I ask?