Why was my spam flag disputed when another user's flag helpful?

Earlier I saw this answer (screenshot for <10K users) in the Low Quality review queue (it is now deleted so the review queue page I saw the answer in is the only way I can see it). I immediately identified it as spam, went to the original post and flagged it as such.

To my surprise a short while later my flag had been disputed a moderator reviewed your flag, but found no evidence to support it. I found this strange and told a friend who is also an avid flagger, (not yet known that he flagged the answer too).

When I get a spare moment I head to The Tavern linking the review page and asking why they think they flag was disputed (for personal development to flag correctly) to which I get an unanimous, yes that is spam. I tell my friend this and then he tells me he flagged the answer as spam too and his was marked as helpful.

Why was my original flag not marked as helpful when the second one on the answer was?

It could be possible that the third recommend deletion vote on the review cleared the flag but if that was the case then I wouldn't expect the dispute message I received.

Here's what happened with this flag:

Several posts were flagged for this account, but I reviewed them one at a time. The first one was link-only, 1 rep, not blatantly spammy (spam has more than links in answers most of the time, to promote the product even more). At first, it just appeared to me as a clumsy way to answer, specially the "If not, I believe the trial version is enough" part, which gives the impression you don't have to buy anything, and that poster doesn't know the product that much.

So I deleted it, marking the spam flag as helpful but giving OP the benefit of doubt at first by not bind-flagging the post.

But after that I saw that the same user posted more copies of the same answer. With such a low reputation, now it's becoming clear that it's spam, and I deleted the account, validating the other spam flags.

(well, maybe it wasn't commercial spam after all, poster has just pasted a link-only answer with a product in it 4 times if my memory is correct, but well, now the benefit of doubt has been reverted, and it is spam all right)

Lesson learned: next time I see a spam-flagged post which looks like a link-only answer, I'll check the user profile (like the person who flagged, probably, who can leave a comment explaining why it is spam, I'll read it and that will help me to decide too) before deleting it.

BUT the plot thickens...

The flag was still marked helpful, but it was someone else flag (the difference is that just deleting makes that it's not hidden from 10k users under the "rude or abusive" banner) so it's not disputed because of me. Checking the flagging history, it appears that another moderator cleared your spam flag and also accepted a "low quality" flag, while not deleting the answer. That's the real reason of your disputed flag. 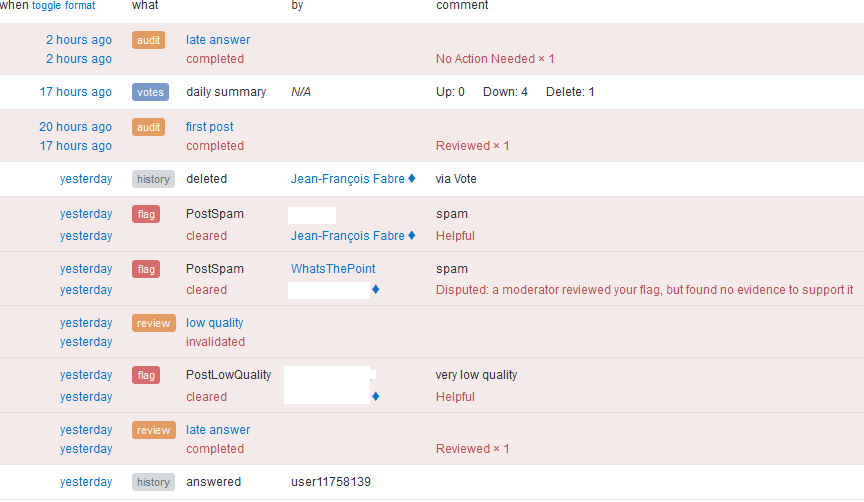 Lesson learned #2: this R/A/spam flag status/resolution is complex. I should have checked flagging history before accusing myself :)