How high an invalidation rate do reviews currently have?

This is posted as a follow-up to my answer on another question, as requested by a Community Manager.

SEDE apparently doesn't accurately reflect the current situation in terms of how well we're doing with reviews, and specifically how many percent of reviews aren't handled to completion. Shog mentioned ~42% of close votes and flags age away, but that doesn't fully explain the review situation.

94% of waste is... worrying. Even Shog's lower estimate of ~42% is pretty high for something that should have these numbers as close to 0% as possible. So I asked our data team to give us some more reliable numbers, and Kevin Montrose came up with numbers that, while still not ideal, are way less worrisome than either of the other two estimates. We've pulled together some more numbers, going all the way back to 2015. TL;DR: it fluctuates, but 10~20% seems about right for "waste" if we assume all reviews and flags are legitimate.

Exactly why and how ReviewTasks get invalidated is... complicated, and we don't have great history, hence the "seems about right" in the TL;DR above. Definitions of waste are tricky too, but here goes:

We considered a review to be finished if its associated review task is deleted. We ignored audit reviews.

Aged out reviews are review tasks that have been invalidated, AND are either at least 14 days old when they were deleted OR the 3 days have passed since the last close-like flag was cast on the associated post. Because there are other rules we didn't simulate that prevent aging away close votes, this will overestimate the number of aged out reviews.

A review didn't result in a post state change if its review task was invalidated AND no close-like history row was created on the associated post after the review was created. Because this considers all post changes after a review (even those not directly caused by it), this will tend to underestimate the number of reviews that didn't lead to a state change.

And finally, the graphs you've all been waiting for: 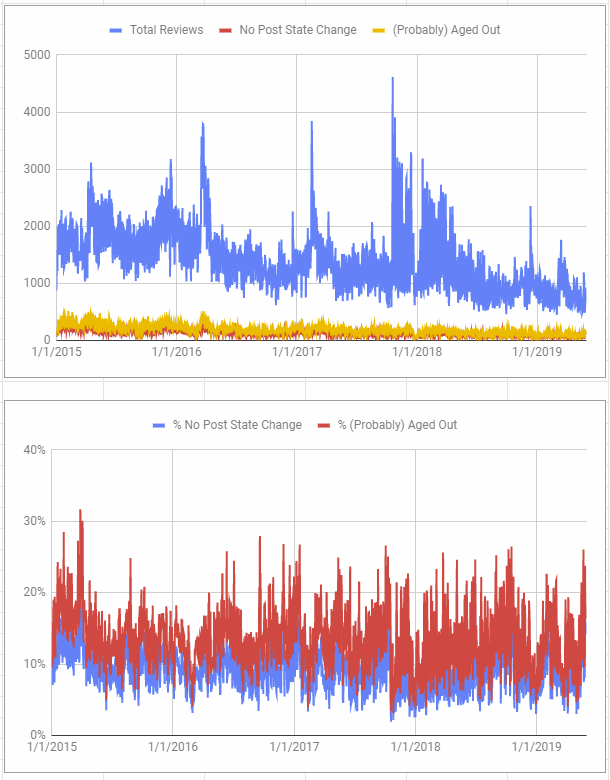 Like I mentioned before the numbers would ideally be even lower than this, but these look a bit less worrisome than either of our earlier estimates. That being said, there's still work to be done here, obviously.

Not the answer you're looking for? Browse other questions tagged discussion review statistics .

506
Experiment (ENDED): closing and reopening happens at 3 votes for the next 30 days
378
Threshold experiment results: closing, editing and reopening all become more effective
181
Declaring a Review strike until efficiency improvements are implemented
126
How was the number of .015% of Meta users calculated?
43
The process of flags aging away sucks

140
Help us clean up the Android tag
82
Could high-rep users help with clearing comment flags?
2
How should we handle people giving answers that are clearly just opinions?
32
Manual audit validation to create highly-reusable unambiguous audits
57
Fixing the disconnect between VLQ and Triage
27
Looking for stats on how frequency of skip actions correlates with audits failures rate and amount of reviews done by user
506
Experiment (ENDED): closing and reopening happens at 3 votes for the next 30 days
113
2020: a year in moderation