I logged in today and saw what first appeared to be a +49 rep gain: 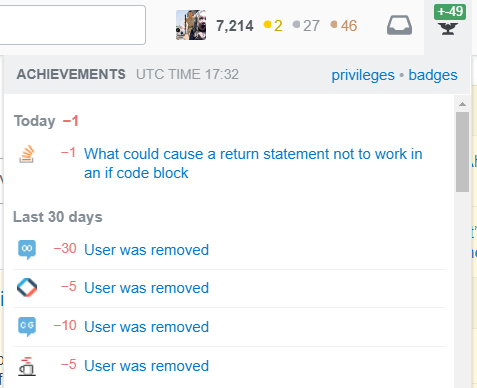 I don't remember what my rep was before the removed user, so I don't know by how much my rep actually changed.

EDIT: I just checked the "Reputation" tab in my user profile (which I failed to do earlier) and it only has the downvote -1 rep. No mention of the removed user stuff. So I guess the -50 didn't get enforced??

Fixed per Positive AND Negative reputation show as +-1:

I had to tweak the code to pass a number around instead of a string, and I mistakenly replaced rep.IsNullOrEmpty() with rep == 0 instead of rep <= 0.

Not the answer you're looking for? Browse other questions tagged bug status-completed reputation .

2
Reputation points showing as minus two in my summary instead of plus two as in the question
46
I downvoted an answer, it was deleted and changed, now I can't un-down-vote
2
Gain badge, lose rep?
76
How did a user receive 1000 reputation for a removed post?
5
New vote rep sticks after deleting post