I often had it that some of my comments went away without notice, though they weren't bad in any way (I think).

Now I got a hint of what might have happened: One of the newbies told me that he used the flag icon to mark the comment as "Okay, I understood and did according action". Quite understandable.

Now, the intention of the flag is more a "red flag" but that does not seem to be obvious enough.

It is quite hard to flag as "no longer needed" by a misclick.

It requires first clicking on the flag, and then selecting an option from a dialog where no value is selected by default and "no longer needed" is the third option: 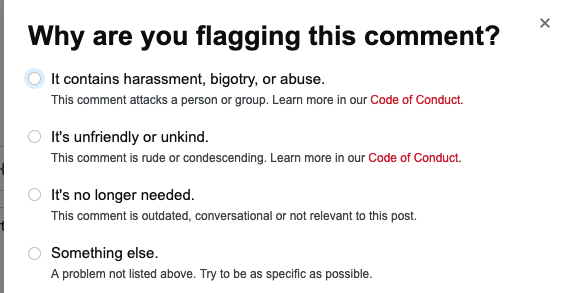 If they were flagging comments by accident on any other category, it would be fairly obvious for the handling mod that that the flag didn't apply and they wouldn't honour it.

I believe the hypothesis that users are flagging these comments by mistake because of the "flag" icon is incorrect. While it's not impossible, it requires a pretty determined flag a comment in error.

And even then, most flags are reviewed by a mod. Unless multiple users are flagging your comment as NLN, which I think can trigger comment auto-deletion. But if that happens, it is even less likely the flagging happened by mistake.

So most of these disappearing comments were flagged correctly, and that's the reason they were deleted

Changing the icon to something different from a flag would make flagging more confusing.

Comments are deleted all the time. The most common reason is that the comment is deemed obsolete. It's usually advisable to treat comments as ephemeral, and to post anything you think of lasting value in an actual post (question or answer).

Not the answer you're looking for? Browse other questions tagged feature-request comments user-interface comment-flags .