Is the reopen audit 23084722 correct? There isn't even a question there

I have a question about a reopen challenge that I failed. The question was supposedly closed as opinion based. It is https://stackoverflow.com/review/reopen/23084722. The audit says I should have reopened this question because there is nothing wrong with it. The audit said: 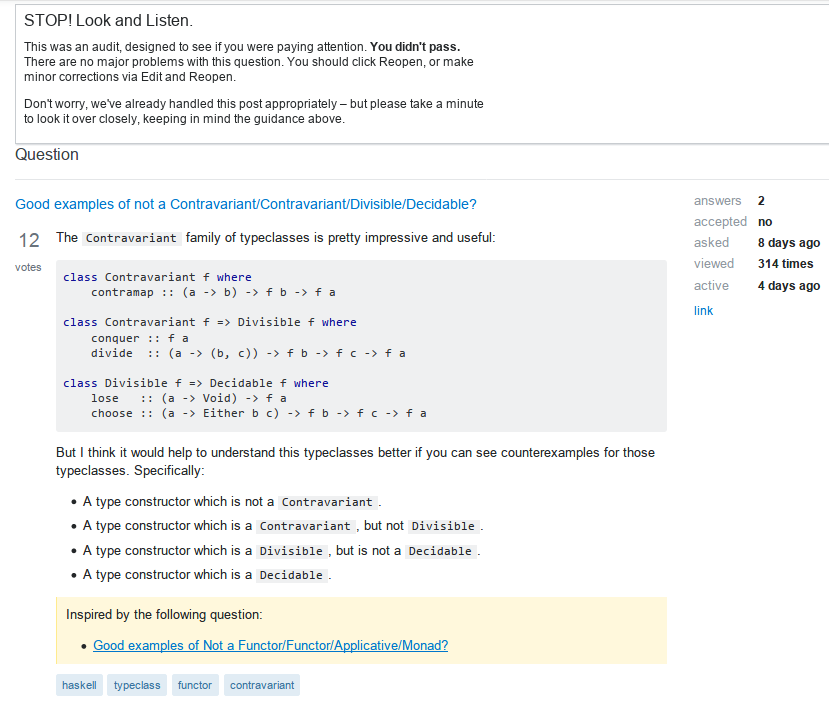 There isn't even a question presented within the question itself. It is more a statement about how the Contravariant family of typeclasses is pretty useful and impressive? Then it provides a link of bad examples, does NOT ask any specific question, and only relates being "Inspired" by the linked content.

How is this justified as being a question that should be Reopened?

And more to the point, why is this not "Opinion Based" that should remain closed? Am I missing something obvious in my reopen evaluation? Or, is this a bug in the audit list of questions?

In this answer, I will mostly deal with what makes the presence of that question on Stack Overflow reasonable.

The title of the question is "Good examples of not a Contravariant/Contravariant/Divisible/Decidable?". Contravariant, Divisible and Decidable are interfaces that form a hierarchy (every Decidable is Divisible, and every Divisible is a Contravariant, but not vice versa). Those interfaces are very general, to the point that someone unacquainted with them might find it difficult to, for instance, grasp how they relate to each other. The question asks for counterexamples that shed light on the differences between them. Those counterexamples are meant to be judged on the basis of whether they are simple and transparent enough to illustrate the differences in a clear way (this criterion, though implicit, is evident to potential answerers). The examples presented in the existing answers do fit the bill.

The question links to "Good examples of Not a Functor/Functor/Applicative/Monad?" because that is a well-known (as of now, 196 score and ~13k views) question with the same format but about a different (yet related) hierarchy of interfaces. The examples in the answers over there are not "bad examples" in the slightest. Rather, they are very effective in capturing the contrasts in the way I have discussed above. (In particular, that other question has a stellar answer by user pigworker -- a widely known and respected academician expert on the subject matter -- built out of examples that are excellent because they are minimal.)

On a more general note, I believe questions asking for on-site examples of clearly defined things under a sufficiently narrow scope are on-topic. My views about that are expressed in my answers to Questions looking for an example and Is example (not code) requesting in some situations on-topic?.

Would it be possible to phrase the question in a way that would make it less of a tricky question should it appear in an audit? Possibly. I'd say, however, that has more to do with the lack of subtlety of the audit system (as Samuel Liew puts it, "It's 'correct' in the sense that it has a positive score and so far nobody has voted to close the question") than with the acceptability of the question itself.

There isn't even a question presented within the question itself.

But I think it would help to understand this typeclasses better if you can see counterexamples for those typeclasses.

The OP is asking for counterexamples.

The lack of a question mark threw you off. And that means that you didn't look past the punctuation (roughly speaking) -- exactly the thing that an audit tests you on.
Yes, this is not the canonical (or the most effective) way to ask at SO. Whether it's good enough is up to community concensus. And the concensus by the readers of that question (in the form of quite many upvotes for the number of views1 and a lack of downvotes, close votes and clarification requests) claims that it's good enough. They were likely pleased by the fact that it's concise and well-structured.

Not the answer you're looking for? Browse other questions tagged discussion review-audits disputed-review-audits .

112
I do not understand why I failed this audit
-23
Remove Haskell questions from review audits
14
Questions looking for an example
10
Is example (not code) requesting in some situations on-topic?
3
Highly upvoted question that doesn't ask a question
2
Review audit question failure - need to understand

18
Failed audit - reason 'primarily opinion-based' based
4
Question should be removed from audit queue
23
Failed audit - why is this a good question?
36
Reopen queue audit failed because the question had been migrated
2
I've got "Review audit failed" unreasonably for selecting "Leave Closed" to a question with no changes made at all
14
What is the correct action for this reopen review audit?