Is the Salary Calculator really based on the Developer Survey?

So I was experimenting with the calculator just for fun and I noticed a very common pattern as the years of experience increase.

I was running some tests against Backend Developer jobs in San Francisco with the years of experience ranging from 5 to 30 by jumps of 5. It turned out that in each jump, the calculator would add, roughly, 13.5% to the base salary (which initially was calculated for 5 years of experience). If we divide 13.5% by 5 (jump in years) we get a 2.7% increase for every year of experience one may have.

Then I ran the tests again varying the years of experience from 1 to 10 by adding one year per iteration and the result indeed was 2.7% per extra year of experience.

Not to judge too early, I did pretty much the same thing for the cities of Eindhoven and Amsterdam both in The Netherlands, where the salaries, generally speaking, are completely different (Salaries tend to be higher in Amsterdam) and the pattern arose again. This time around though, the increase in the salary per year of experience was on average 1.19%

This, apparently, is very inaccurate as the values in the calculator are completely static based in the region you query by.

One other thing I realised is that the top value in San Francisco for someone who had 30 years of experience (which is the cap for the calculator, anything beyond 30 is ignored) was $313K, which equals $26K a month! Unless you're a CTO, I doubt a backend engineer can make 26 grand a month, except of extremely rare occasions. Glassdoor, for example, says the highest salary in San Francisco for a backend engineer is $188K, which is off - according to SO's numbers - by 60%.

So my question actually is: Does the calculator consider real numbers given by developers or it just uses an average increase per region and uses that value instead to calculate the final numbers?

As I am originally from São Paulo, I decided to experiment the calculator for it as well. It turns out that for 30 years of experience, a developer, according to the calculator, can make R$1M a year! You can argue that the conversion from USD to BRL basically equals the top salary in San Francisco, but things are not that simple. R$ 1.049.000 a year means R$87K a month and I am absolutely sure no developer in Brazil will ever make that amount of money if they are enrolled in permanent positions. Although not very valuable outside Brazil, BRL kind of maps as 1-1 to USD if you consider what a good salary is (for example, 10K USD per month is a good salary in the US as much as 10K BRL per month also is a good salary in Brazil) so R$87K a month is just unreal. The numbers are way more off than what I initially thought. I am sure any Brazilian folks who happen to read this question will confirm such statement. 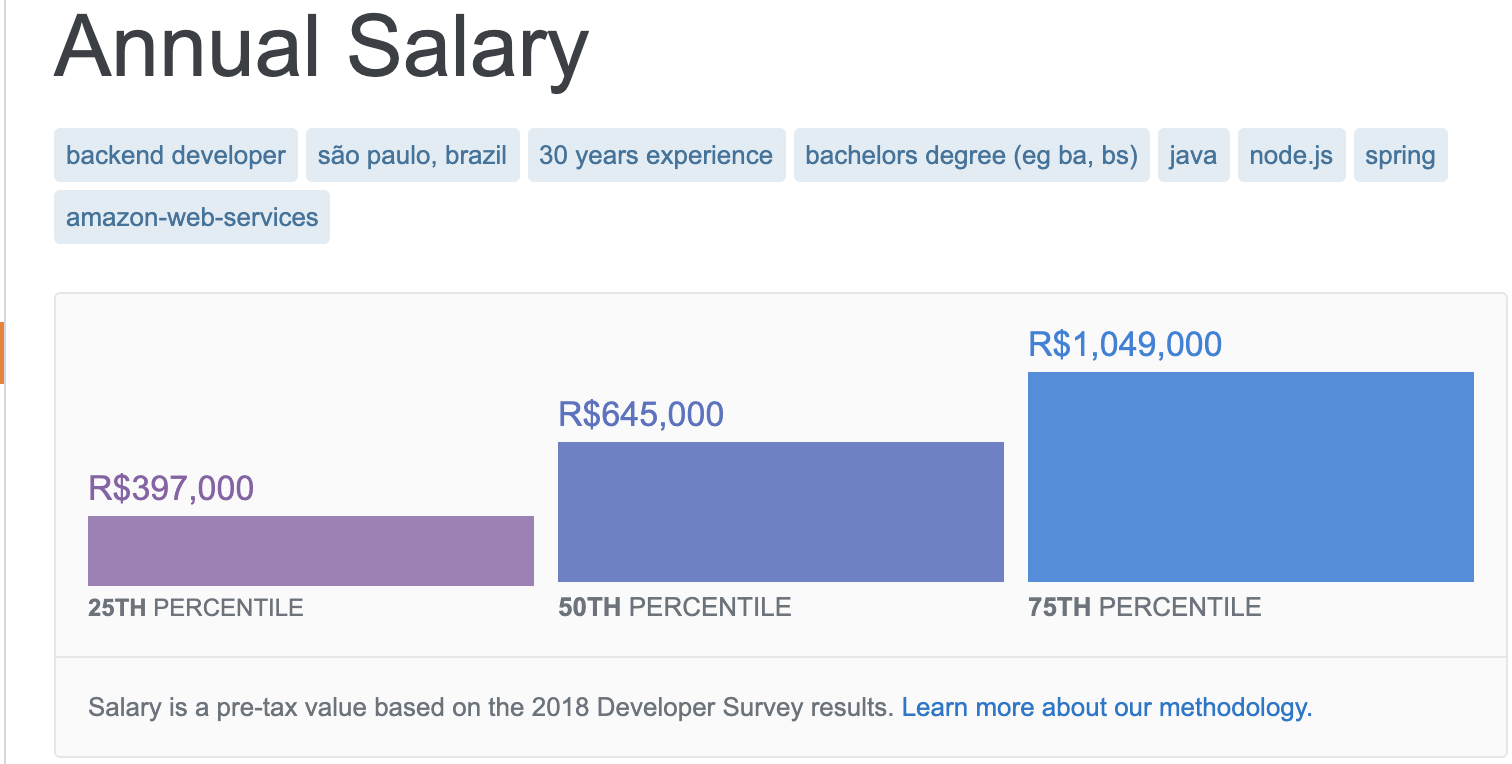 We again this year used multiple linear regression to predict salary from the model inputs, with regularization to help with variable selection

So they took the data from the developer survey, split it into high- and low- income bins, and then fit each to a linear model. Therefore, it's no surprise that you'd get a linear relationship between experience and salary because that's how they chose to model the data.

They also acknowledge that the model is not as good at predicting salaries in countries with lower incomes, like India, Brazil, and Russia:

2
The salary calculator is broken for some non-US countries
7
Clarify how education & experience levels are defined and used in the 2018 salary calculator
4
Salary Calculator Source?
53
Stack Overflow Jobs salary, how to know the period?