Answerer modifies question in order to re-open it

This question had been closed for the second time. It is about manipulating string in order to remove occurrences of characters between brackets and parentheses including themselves.

Initially I closed this question with three duplicate questions:

One of the answerers re-opened the question and added some statements about leading spaces which previously the question had found a duplicate for (the third link): 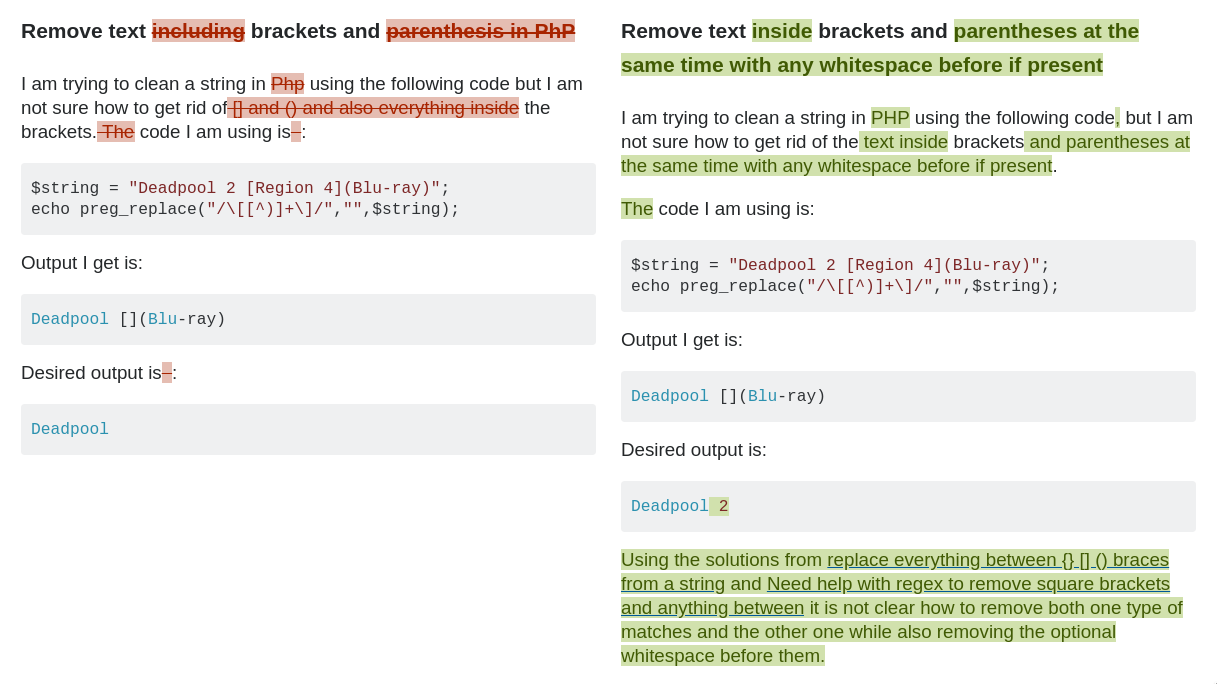 Question is now re-opened for the second time and still to me it seems a question that matches a bunch of existing questions like these two:

Why it shouldn't remain closed?

If it already existed what is the importance of explicitly adding it to the question?

To make it abundantly clear that the requirement is there, since clearly some people didn't notice. And thus presumably explain why it is not a duplicate of questions that don't have that requirement.

The OP of the question stated that, given a specific input, they wanted a specific output. That output, by all appearances, removed whitespace. Therefore, removing whitespace is part of the requirement, even if they were not originally spelled out in the text (and even though the OP quite frankly probably didn't realize it).

So they're not creating new requirements; they're emphasizing existing requirements which, in their opinion, makes the question ineligible to be a duplicate.

I feel like I'm not wrong in keeping the question closed and as the answerer is trying to put more than what is needed in the question they are not helping anybody at all.

I think that you are correct that the question should remain closed, but I also don't think the answerer is adding anything that was not already a requirement.

Even if the question is not a duplicate, it is understated in its desires, since it is not clear on what basis you would remove whitespace. That is, if bracketed text is between two non-bracketed text, how much whitespace do you preserve between them?

I don't have any problem with the edit (though I don't see it %100 right) but with the purpose behind it.

Just because someone is doing a thing to cause an action you don't agree with is insufficient justification for saying that a user cannot do that thing. Edits are good or bad on their own merits, not because of the reasoning for making them (in most cases). Edits are bad because they violate the spirit of the question, the intent of the OP, or generally make the post worse (or not improve it).

If you would find the edit to be unproblematic without the context of the duplicate issue, then it doesn't matter if the edit was made in an attempt to highlight that the editor does not think the question is a duplicate. The edit is valid.

24
Appeal to re-open a question on Stack Overflow
3
What purpose does a question serve that does not explain the problem clearly and is answered by the OP
2
Are questions that are the reverse of an existing question still a duplicate?
4
Removing wrong duplicate flag when there is a correct duplicate flag
24
Marking a question as a duplicate of a question whose body contains the answer
1
Unmark as duplicate or rename the original
16
User asks almost the same question 4 hours later again
16
How should THIS specific regex-based close/re-open/delete/un-delete war end?