This has already been reported in this Meta Stack Exchange bug report, but as the bug has to do with Teams, I'm reposting this here since the Teams development team is active here. While I don't have enough reputation to access the Close Votes queue on this site, I could reproduce it there, where I do.

As Fabby reports, when filtering close reasons in the Close Votes queue, the "off-topic" option shows up twice: 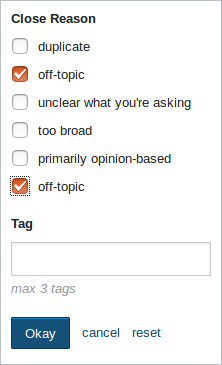 Shadow Wizard did some investigation by querying the Data Explorer for the full list of close reasons, and it looks like there is a new close reason with ID 201 that is supposed to be an "off-topic" close reason for Teams (still referred to as "Channels" in the database): 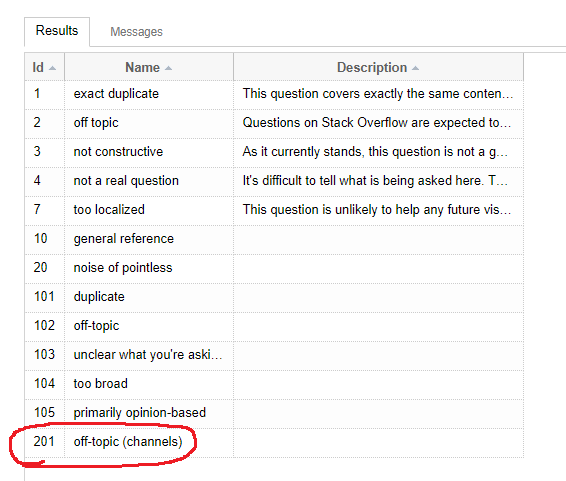 It appears that the team is implementing an official "off-topic" close reason option for Teams, possibly in response to too many users using unsupported workarounds to get around the fact that the only closing option was as duplicate. However, I'm a member of a Team, and I don't see this new option; I still only see the duplicate reason as the only option.

Shadow Wizard also found that the second "off-topic" checkbox in the filter dialog does indeed correspond to this new reason 201; can that checkbox please be removed? The close reason is not currently in use on Teams, but it's triggering a bug on public Q&A.

(To answer this one properly, too - I've already answered the question on MSE)

Thank you for spotting this. This was indeed an unintended side-effect when introducing a new close reason for Teams. I didn't have in mind that our moderator tools consider all close reasons when showing filter options.

Sorry for the confusion. The problem's fixed now and the second off-topic option is gone.

13
How do I close a question on Teams for a reason other than duplicate?