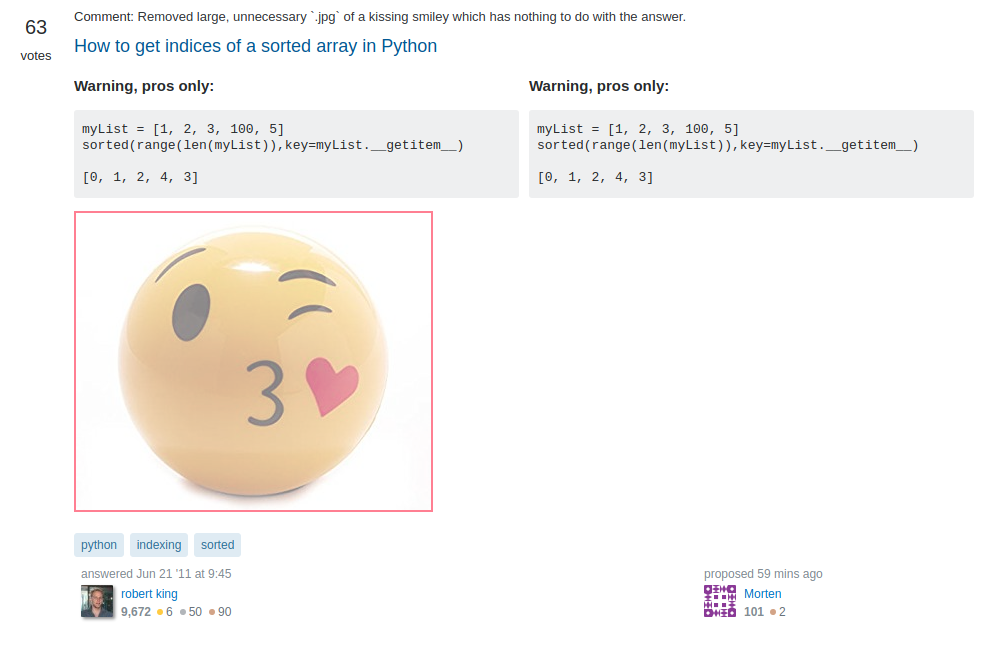 So, I am just not sure because at least 63 people liked this 8 years old answer without removing this funny smiley. Of course I know where the "Skip" button is, but I would like to ask what you will do with this edit? And in general, what you will do with other such stuff that doesn't improve quality of a post but was on SO for a long time for some historical reasons?

How many votes the answer had is irrelevant.

This doesn’t seem like a difficult decision to me. Cleaning up the post like that is undoubtedly a good edit. The noise to signal ratio decreases significantly by removing that image.

Approving is the way to go.

(It was approved by two other users since you posted this question).

I think you should leave the content as is. While the sound-to-noise ratio is lessened, I think the overall user experience of the site takes even more damage. The trade-off is not worth it from a user perspective.

Most organizations go through similar steps. At first, it's a free-for-all. Many interesting things are tried. Eventually, it turns out that rules are needed, and so they come into existence. Then there's a period of refining the rules.

But the next step is one I've seen really cut the soul out of some groups, which is applying present rules to the past.

I think, given the context, it is nice to look back and say: "Hey, remember when SO was small enough people could get away with this. If we did it now, it'd be awful though."

Leaving it does not imply in any way that the act is acceptable, but erasing it further buries the reality which is that (if it could) Stack Overflow would have a lot more chaos and fun. That this is a fun place with rules meant to keep it working, rather than an everything-is-serious ordeal.

In short, removing the more playful parts of Stack Overflows past is akin to hiding it's inner child, and is an act more of forced seriousness than maturity (IMO).

As a soundbite: "Grown-up is a game children play"

Not the answer you're looking for? Browse other questions tagged discussion edits suggested-edits specific-edit .