What to do if your question is closed as “Too broad” even if it isn't?

A while ago I asked a question about compiling go to C [click here], and whether or not I could use a different c-compiler then the default. I received 2 comments, both asking me about the legitimacy of my question and questioners assumed that GO "cannot be compiled to C".

I provided both questioners with a link to the build options of go where it states you can create a "c-shared" library. To build this library by default GCC is used and I wanted to know if CLang could be used instead. In the meantime someone had provided me with an answer to the question in the comment-section.

I then noticed my question had been down-voted and subsequently closed as "too broad". Which is complete non-sense, so I provided argumentation in the comments below my question why it wasn't "too broad". Afterwards I voted to reopen the question.

Today I find that the question has been deleted because it has no answers and 2 downvotes. I am perplexed about this chain of events.

The down-voters obviously don't know Go well enough and the question did have an answer but it was not possible to list it as an answer since the question had been closed as "too broad". I received no suggests nor warnings as to what exactly was "too broad" about the question so I couldn't change any part of it.

In my argumentation I even state that the question can ben answered with "yes or no", since I can either switch out the compiler or I can't.

Now to my question, how can I do something against these types of occurrences, which I feel are based on the lack of knowledge of moderators? 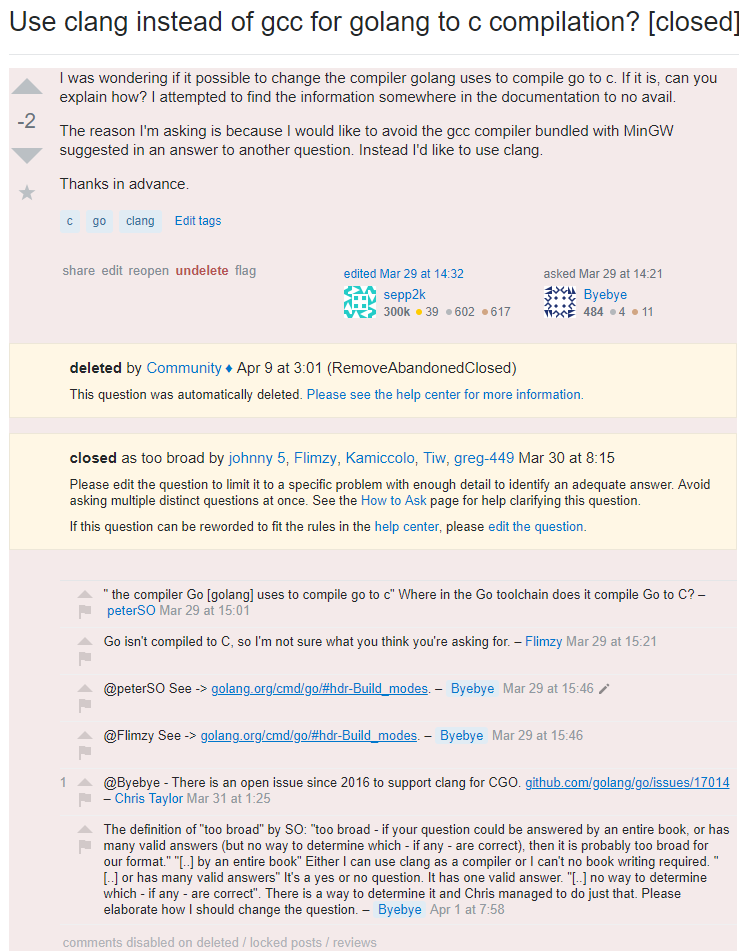 I provided both questioners with a link to the build options of go where it states you can create a "c-shared" library.

The best way to avoid this in the future is to take people at their word. If they say "Where in the Go toolchain does it compile Go to C?", you should assume that something in the wording of your question made them think that you were asking about cross-compilation. Look at your question from a dispassionate perspective and find out what is making them think that. And then make it clear that this is not what you're talking about in the question, not in a comment below.

Not the answer you're looking for? Browse other questions tagged discussion specific-question close-reasons deleted-questions closed-questions .

517
Why isn't providing feedback mandatory on downvotes, and why are ideas suggesting such negatively received?

5
What reason should I have chosen for voting to close this compile error question? Should I have voted to close it at all?
63
Dealing with code critique requests — isn't "Too broad" too broad?
3
Focused question with simple answer closed as "too broad"
18
How can I make my "too broad" question acceptable?
13
Need help understanding why question is "too broad"
9
Is this question really 'too broad'?