What languages were used for coding 50 years ago? [closed]

What were programmers coding 50 years ago? Are they still actively programming and using Stack Overflow? 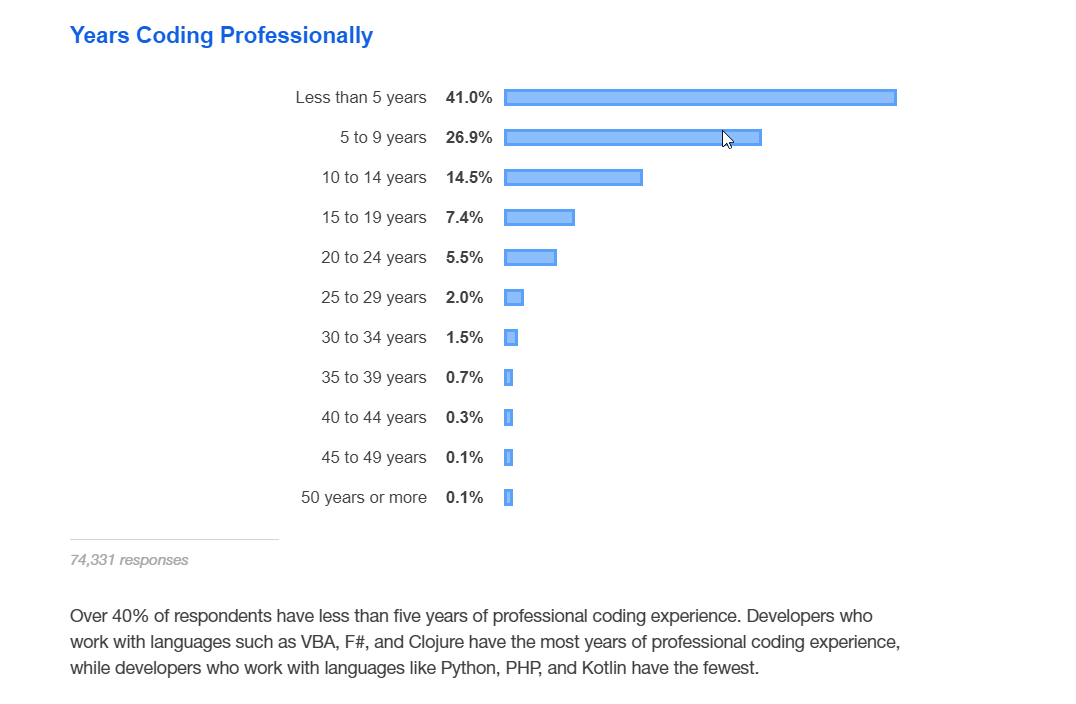 During the 1960's, the three most popular languages were assembly, Cobol, and Fortran. For IBM mainframes, the programming interface for database file access were implemented as macros in assembly, so in some environments, programs ended up as a mix of assembly and Cobol, and due to legacy issues (why convert already working code?), continue to still exist today.

Going further back in history to the days of "unit record equipment", plug boards were used for "programming".

Early vacuum tube computers were programmed in the equivalent of machine language.

Getting back to the 1960's, other languages existed, but weren't as popular. APL is an interactive mathematical language and still available today. RPG II was sort of a replacement for plug board programming. Other languages include Algol, Basic, PL/1, ... .

If you can find a copy of the book History of Programming Languages, edited by R L Wexelblat, published in 1981, you'd find sessions on:

The requirements for the languages chosen were that the "languages (1) were created and in use by 1967; (2) remain in use in 1977; and (3) have had considerable influence on the field of computing".

There were many, many other languages in use around then. A lot of code was also written in assembler — or macro assembler.

There was a second conference later, published as History of Programming Languages II, edited by T J Bergin and R G Gibson, published 1996. That covers a lot of later, more familiar languages, including:

Java and JavaScript had not been around long enough to warrant consideration. Scripting languages like Perl, Python, Ruby, Tcl/Tk, were not included either.

If HOPL III were held in 2020, which languages would it cover, I wonder?

I started programming in 1967 in Fortran. A friend of my father had a Honeywell 200 at his factory, invited me down one Saturday, and got me started with punch cards and Fortran. He then gave me a job that summer. Their professionals were using Cobol, so I managed to learn that, along with a little assembler. (The "200" was basically an IBM 1401 clone.)

In the fall I started college at Dartmouth. Soon as my parents had left, I marched into the computer center and asked the woman in charge how I could get permission to use the computer. She pointed to the terminal room (Model 35 teletypes) and said, "Take any empty terminal. Your student ID is your login."

When I asked HOW to use it, she handed me a thin green book titled, "Dartmouth BASIC." I still treasure it.

Long story short, Dartmouth Time-Sharing, which was almost entirely written by undergraduates led by Professors Kemeny and Kurtz, made BASIC, and computing, ubiquitous on campus. Classes from physics and engineering (obviously) to sociology used it. Not to mention various primitive text-oriented games. It was free, and there were terminals all around the campus.

I learned assembly for the GE 635 from Professor Kemeny, joined the system staff, and learned enough by the time I graduated to keep learning.

If you're at all interested in the history of BASIC and Time-sharing, they made this movie for the 50th anniversary in 2014:

Several of the programmers in the video had returned to teach by the time I arrived.

I started in the late 70s (as an 8 year old) with BASIC on the Apple ][, Atari 8-bit, ZX-81 (aka Timex/Sinclair 1000), and Ohio Scientific Challenger 4P. I taught myself Zilog Z80 and 6502 assembly language. The Atari 8 bit systems had a really nice macro assembler and debugger called Mac/65. I then got into Action! on the Atari 8-bit. I wrote myself a bitmap font editor and a disk sector editor using it. I also dabbled in Forth.

I then graduated to Pascal and C on the Atari ST in the mid-80s. And then took a university class on FORTRAN 77. I then started doing C and C++ on Unix systems (mid to late 80s). Around that time I also learned Scheme and Lisp.

I wrote my own B-Tree indexing system and AVL tree implementation (complete with the rarely described (in fact, I have never seen it described, figuring out how to do it forced me to a deeper understanding of binary trees) and annoying to implement delete operation) in C for MS-DOS for a small employer paying me $6/hr in 1988-9. I wrote it as part of converting their accounting and inventory systems to C and C++ from GW-Basic.

We didn't have anything like StackOverflow at the time. Usenet was sometimes useful, but mostly I relied on reference manuals. Good ones were hard to come by and treasured when you found them. Donald Knuth's Searching and Sorting was a treasure. The K&R manual for C was also a bible to live by. The various technical manuals for the hardware I used (such as Mapping the Atari) were vital. So were The Design and Evolution of the C++ Programming Language and the ARM (aka Annotated C++ Reference Manual). Oh! Pascal was how I learned Pascal.

So that's a bit of what programming was like way back then.

BTW, I still used version control. RCS. Mercurial is MUCH better. Not so sure about git being an improvement though.

Computer programming started to assume the shape of OOP before 50 years. Smalltalk, the first-ever OOP language which inspired the OOP models of Java and Object Pascal emerged around this time.

Wikipedia articulates the contributions made by the forerunners of this historical trend as such:

Smalltalk was the product of research led by Alan Kay at Xerox Palo Alto Research Center (PARC); Alan Kay designed most of the early Smalltalk versions, Adele Goldberg wrote most of the documentation, and Dan Ingalls implemented most of the early versions. The first version, termed Smalltalk-71, was created by Kay in a few mornings on a bet that a programming language based on the idea of message passing inspired by Simula could be implemented in "a page of code".2 A later variant used for research work is now termed Smalltalk-72 and influenced the development of the Actor model. Its syntax and execution model were very different from modern Smalltalk variants.

My first encounter with a computer was a bus which came from Manchester University in my last year at secondary school, 1971, at Nelson Grammar School. We were given a guided tour as part of our Science lessons.

We were shown round the bus which was filled with what looked like metal filing cabinets on each side and a lot of whirring noises. It was hot. We were told the computer had 4k (I think) of Mercury Delay Line storage.

The computer was doing simple calculations such as 2+2=4 and printing them out on a teletype. During the demonstration the computer developed a fault and stopped and the chap giving the talk looked at the error message and then thought for a moment. I got the impression that he was working out which part of the computer had failed. Then he pointed to one of the filing cabinets towards the front and to the right. "Hmmm that should be about there" he said. He walked over to it and kicked it with his foot. The computer sprang back into life!

When I went to Nottingham University, to do Chemistry and Physics, we wrote programs on a FORTRAN coding form which is squared paper similar to graph paper to start with and then transferred the program to punched cards and submitted the deck to the computer for an overnight batch run.

The data for the program was entered in the same way, on punched cards. These were submitted for an overnight batch run. The output was on music ruled computer paper which we got the next day. What was really frustrating was a compile error which needed to be corrected and re-submitted the next day - we only got one run per night.

111
Slow response rate and a low number of upvotes as compared to 2-3 years ago
22
Asking for help understanding an answer from five years ago
21
Is Metasploit software primarily used for programming?
1
Most asked Question Unclear! Viewing Rejected Edits
47
Developer Survey results conflate age at which you learned to code with how long you've been coding
88
What were the original rules for posting on Stack Overflow?
2
Enthusiast/Fanatic - phone, web app, android app: What counts?