Why were icons not in Time Travel? [closed]

The icons of the Hot meta questions are not showing: Why do those icons not exist on site Time Travel? Does this feature exist in Time Travel Past? 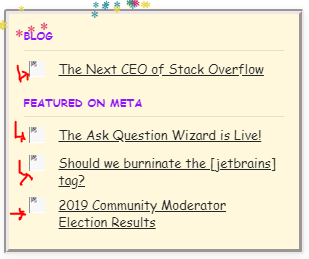 This is actually by design. It's all part of the 90s theme.

All of the icons are actually set to "broken image" icons, which made their first appearance in the late 1990s with Netscape Navigator. As the footer tells you, this site is "best viewed in Netscape 3.0".

Plenty of the "Geocities"-style web pages in the '90s that the theme copies had broken images.

Not to mention that many browsers used the same (or similar) "broken image" icons for images that had not yet finished loading. Since web connections were much slower in the '90s, images often took much longer to load, and you saw a lot more of these icons. Hey, at least you could read the text!

From the inline CSS:

I guess this is a joke about the prevalence of broken links, especially in old sites (hence the whole 90's period feel).

Not the answer you're looking for? Browse other questions tagged discussion community-bulletin april-fools time-machine .

168
Am I the only one seeing the '90s retro theme, with the unicorns and sparkles?