Do we really need a meta post about each election?

Do we really need a post on meta about the upcoming election? As far as I can tell, the Upcoming events already tells us there's an election, and I believe that hangs around until the end of the election.

Furthermore, the meta post really only says the following:

The election itself covers in my opinion all of this information:

So it doesn't mention how long each election goes for, but it does contain a start and end date. The question on meta just takes up a slot in hot meta posts, and truthfully there's already enough there about an election, I'm sure no one will miss it: 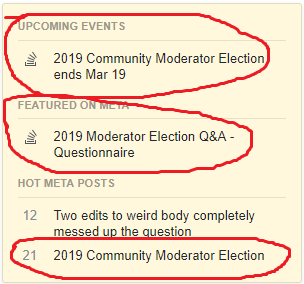 The post seems to take time away from people, as you'll notice people voting to close it and a moderator has had to leave a comment.

I'm not trying to ruin anyone's fun, but I really don't think we need the post on meta about the election. There's already enough information to draw everyone's attention there is an election, and it wastes space in the hot meta post and costs some people's time dealing with close voters etc.

Not actually inspired by Undo's comment, I wanted to ask about this since I first saw it. I tried downvoting the question in hopes it wouldn't appear in hot meta posts, but alas

Furthermore, the meta post really only says the following

Repetition is essential to a quality education; folks often ask questions that are already documented thoroughly. You may even see this on Stack Overflow itself once in a while!

49
Should we really be closing rants on Meta as duplicates of another rant?
3
Answers in comments: Am I a jerk for answering anyway?
190
Keep the love of puns [burninating] in our hearts
22
Old question, same technology, not satisfied by the answer. What to do?
3
How to ask for help forming a question
149
Rethinking Moderator Candidate Score for SO