What is the wrong judgement in reviewing queues? [duplicate]

I was reviewing queues some minutes ago, as I think it can help the community, and I encountered two things which I do not really understand nor agree:

This first image was an accepted review. But I was shocked to see the difference in opinions from the reviewers.

I mean, I have sometimes seen 3 "Looks OK" and 1 "requires editing" or even "unsalvageable". But in this case, there are 2 "editings", 2 "unsalvageable" and the rest OK. How can this abysm of a difference exist? With this picture, I started to doubt about my "judgement" and that maybe I was harming the community by my poor judgement (or maybe the others were wrong, which can be).

I upvoted the question, but in Stack Overflow I see a lot of reticency to do upvotes. It's like people don't want to give upvotes, quite strangely. In the Japanese Community, for example, any effort shown is worth an upvote! In SO is quite different.

But then I encountered a question which I did not see wrong (maybe because I lacked some knowledge). 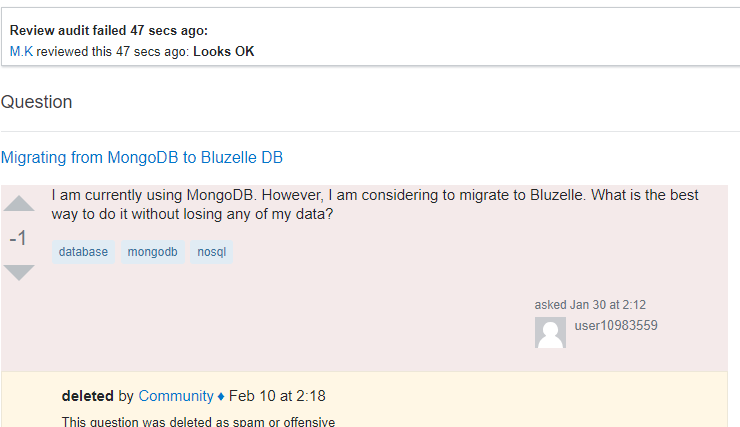 I have asked several questions, so I know how to ask a good, minimal, etc question.

I have used mongodb, so I did not find it a weird question .And the question was closed by the community! I mean, that means I was completely wrong, but I do not really understand how I was so wrong and, if that is the case, in other cases I have helped with "Looks ok" or flagging, did I really do it right?

This question is not "Looks OK". There is at least an "i" that is not capitalized and a blank after a comma is missing. So you should have selected at least "Requires Editing". I'm not from the Android field, so I cannot really judge if the question is close worthy. I would at least expect an image of what the user sees and what they expect to see.

This question is off-topic. Server administration is not a programming problem and should thus not be asked on SO.

While looking for the review links, I also noticed this review, where you marked a request for a off-site resource as "Requires Editing". "Requires Editing" means that anyone can fix the problem by editing it and is suboptimal for off-topic questions.

919
How does the Triage review queue work?

48
Triage gray areas - what should we do when the question is borderline?
24
Did I do something wrong in this Triage review?
28
Why does this question "Look OK"?
26
Giving feedback to inexperienced reviewers
195
Why was I suspended from reviewing for selecting "Requires Editing" in Triage?
24
What should I do with legitimate questions that can't be answered?