Edits which not just slightly amend, but completely revision the original answer are generally discouraged and posting a new answer should be opted for instead of editing existing one in such cases.

Natural reasoning tells me that it shouldn't matter whether the question is overwhelmed with answers or if it's a nearly empty topic: if you have something to contribute, if you can phrase it better, put accents better, and generally bring it across better (in covering the issue all around), go for a new answer.

The author of the edit in question appeared to disagree with that position and came up with a strong revision of the original answer - presumably because it's the accepted answer to the question, so as to bring benefit without bringing extra fuss (like posting a new answer, which will inevitably appear on the next page).

While I do see simple practical goods in it and may come to agree with such edits, I'm still not certain as, generally speaking, it's a totally new answer and, for a reason, semantics matter. So ultimately I reckon that this is not proper.

Here's the screenshot and the link: 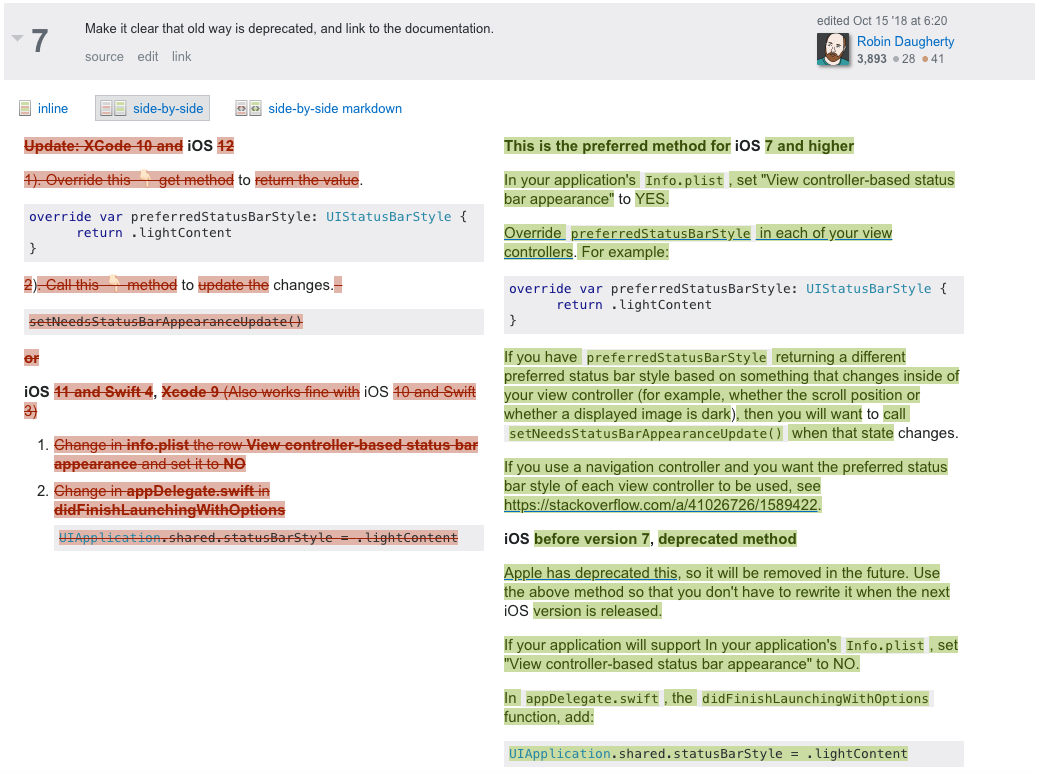 Actual answer and its revisions.

The editor seemed to have had enough reputation to finish the edit without the original poster's consent. That is, the original answerer had no opportunity to reject — rollback if only, but again that's not of his interest as the edited answer is superior. I mean, should we even care if the two sides are satisfied? Is that about integrity and consistency in observation of the rules, regardless of their immediate practical weight, OR it's about agreed convenience, personal satisfaction (like, edit happened, two sides agreed, what's the problem)?

I can see that both points have understandable reasoning. And I may be leaning towards the latter. But one of the problems that come to my mind is that such edits, inherently made by other users (no responsibility on author), can simply grab best parts from other answers and devaluate them. The logic is: the top answer should contain top content. This edit is particularly the case.

What do moderators, community leaders think?

Should such edits be left intact?

57
Does this edit change the meaning of the answer?
38
Is it OK to edit the question to change the author's intention?
43
Are edits that insert Swift 3 code into existing Swift 2 answers acceptable?

26
Clarification regarding editing answers of other users
4
Totally changing an accepted answer
57
Does this edit change the meaning of the answer?
3
When we should rollback an edit contrary to author input?