How do I reward someone that answered my question, if he answered it indirectly

I have asked a question, that I closed as a duplicate, one of those answers helped me a lot. And I don't think there should be to many "almost the same" questions out there.

I asked this question: How can I read a single char from stdin without invoking bash?
And "fess ." provided the perfect answer.

I know there is a bounty-system, can I somehow award a bounty to someone on the "original" of the "duplicate"?

I should at least award the 35 (10 upvoted and 25 accepted) reputation points, even if it comes out of my own reputation pocket (as soon as I can afford it).

I ask him to duplicate his answer to my question. That would help those that had the same question more than them having to click the duplicate link, and then sorting out the one that also applies to other shells than ksh. Would that be the right way?

What is the right thing to do?

This is Stack Overflow, you have several solutions; some are encouraged, others frown upon.

Once you earn enough reputation points (75), you can set a bounty (50 or more) on the duplicate question. Rewarding an existing answer is one of the usual use case. 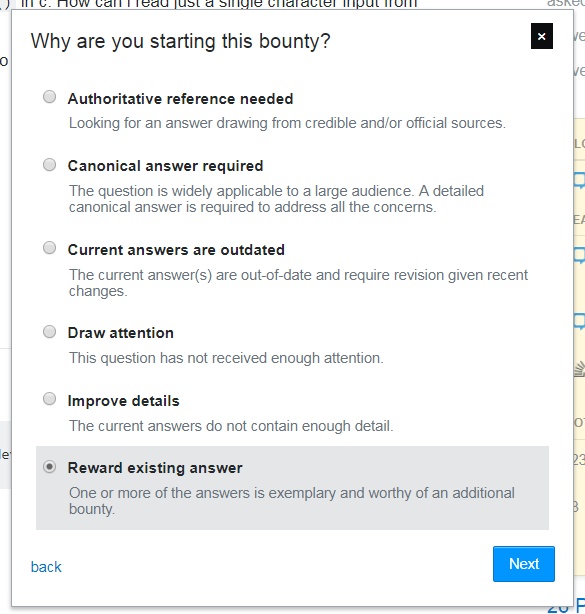 24h after that, you can manually award your bounty to fess' answer:

It will surely show your appreciation; further more, it will show to other readers that this answer is somewhat special.

Upvoting an answer provides 10 reputation points to its author. This is the common way to show appreciation.

This is frowned upon since you do not provide additional information. Please don't unless you have an improvement suggestion to make.

Duplicate fess' answer into your question

This is not only discouraged, it is a case of serial voting and is disallowed on the stack exchange network.

When a single user continually votes (up or down) on many of your posts within a short period of time, the system considers these votes to be invalid and removes them. This could happen for a variety of reasons, such as a user finding a user's great answer and visiting all of their posts to upvote them, or a user getting into an argument with another user and downvoting their posts indiscriminately in revenge. No matter the cause, this sort of systematic targeted voting is not considered normal behavior and the system will not allow it.

fess.'s answer is not community wiki now, so can do anything you want.

fess.'s answer is not community wiki, so you can up-vote it, and he'll get rep from from as usual, and also can set bounty as usual, so everything will be as normal as usual, bounty would be actually a good hit, show your appreciation.

6
How can I reward a user who helped me in the comments?

35
How to deal with bounty questions that are duplicates
23
Why didn't the answerer get my bounty?
9
Can't we award bounty to a helpful answer directly?
41
How much bounty can a question have? Is there any max limit?
5
Same person offers bounty and answers question
14
Is it OK to mark a question as a duplicate of other questions that indirectly answer it?