Why was a question about installing NetBeans closed for seeking recommendations?

A question about the revised process for installing NetBeans was recently closed as being off topic:

"Questions asking us to recommend or find a book, tool, software library, tutorial or other off-site resource are off-topic for Stack Overflow as they tend to attract opinionated answers and spam. Instead, describe the problem and what has been done so far to solve it." – Samuel Liew

An image of the question is pasted below in case it gets deleted. A few points arising: 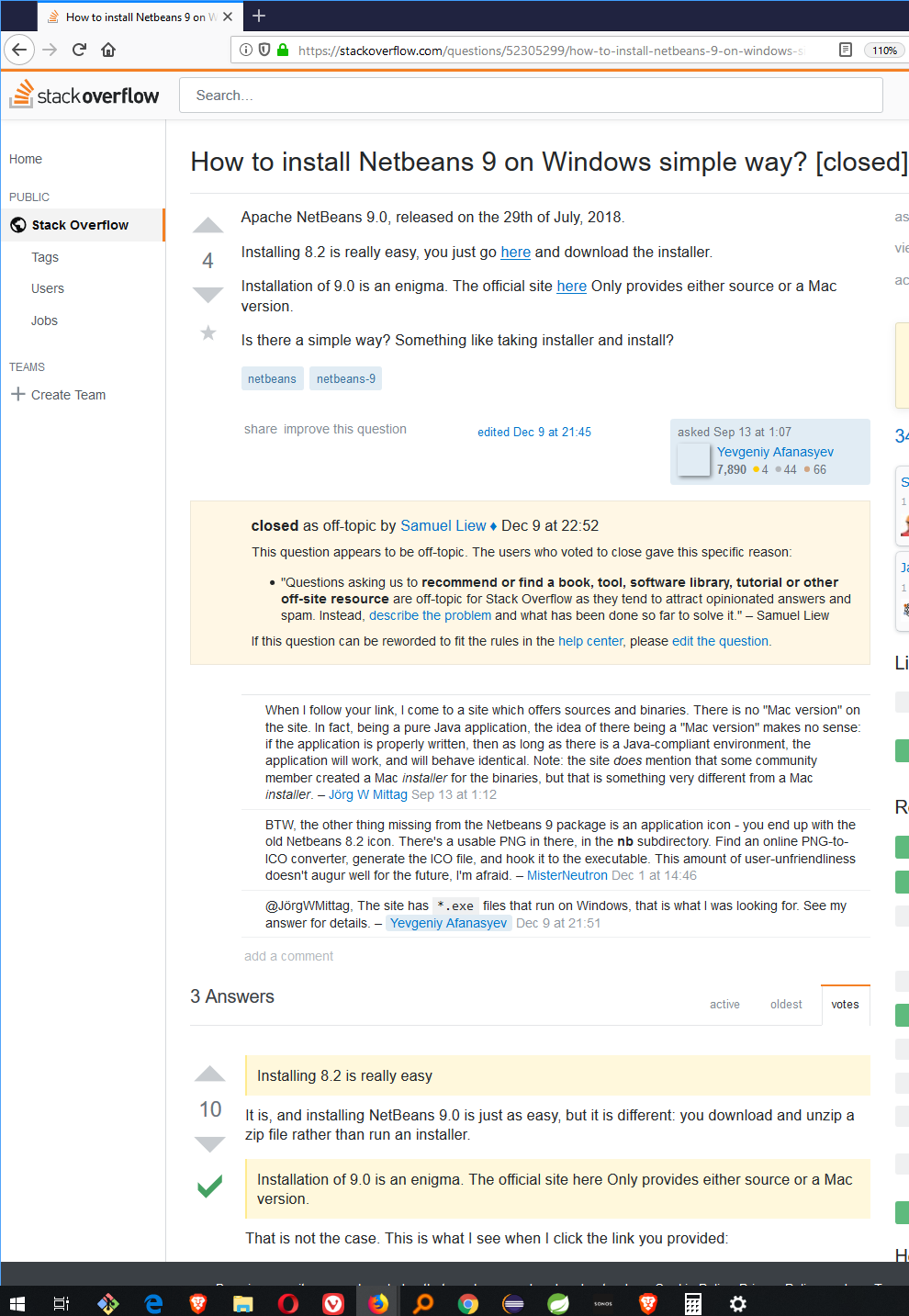 Update based on feedback to this question:

There's a tacit difference between developers using software, and developers installing software. The long-standing premise has been that we at Stack Overflow don't directly deal with a developer installing software, because who knows how their environment is set up, or how their application elects to install things. For instance, I'm on Linux and I use IntelliJ. There are at least three different ways to accomplish this, and they all depend on how you want to go about installing it.

On the other hand, I could see how the laypeople of Super User may not know or care for installing such a niche and context-specific piece of software. What's more telling is that the people who actually use this technology on a daily basis (for all intents and purposes) live here, and a question asking about how they should be installing their developer-oriented tools would seem perfectly on-topic.

With that, I personally do see this question as being on-topic for the site. Developers that wish to use NetBeans should be able to ask questions about NetBeans (which includes installation) here, since someone here would have been able to do it. This isn't generic software and this isn't likely going to be answerable by your average user at Super User. More importantly, this is our domain of expertise, since we work with IDEs like this all the time.

If nothing else, it seems like the question should've been brought before the community before a unilateral decision to close it was made.

As mentioned the question could be edited so it's not unclear and off-topic. A clear statement of "How do I install the Netbeans 9?", that at least went through the trouble of actually downloading it first, would be a better, on-topic question. A poor, unresearched question, with very marginal utility. But on-topic nonetheless.

When a question requires editing by its author to be on-topic, we close the question until the author does so.

In my opinion, the original closure was appropriate, and it should now remain closed until edited by its author.

As much as it pains me to disagree with Makoto, I do believe this question is completely off-topic. And that the fact it deals with Netbeans is completely irrelevant.

Taking the question in isolation, without considering the existing answers:

How to install Netbeans 9 on Windows simple way?

Even with the title we are off to a bad start. What does "a simple way" even mean? What's meant with "how do you install"?. It almost looks a trick question, since there is no "installation" process" at all for Netbeans: You unzip in your location of choice and run the appropriate executable, if you have Java installed.

Then, the question itself, line by line:

Installing 8.2 is really easy, you just go here and download the installer.

First, a bunch of noise at the beginning. We can safely skip this.

It points to the download page, and complains about an enigma. But on this same link it clearly says that "For this release no official installers are provided, please just download the binaries and unzip them". No "enigma" there, apparently.

Having had installed Netbeans, I can attest this is true. Download, unzip, run. The only "engimatic" part could have been finding the "bin" folder, for a very novice and uncurious user.

Did they have trouble finding this folder? Or trouble runnning the executables? Are they asking how to create a shortcut for the executables, something commonly done on Windows by an installer?

They simply do not say, and as happens many times with very basic questions, this makes it confusing.

If someone were to ask me "how do I drink water from this glass?" I think my first impulse would be to ask what they meant, not to say "you raise it to your mouth, tilt it so water drops inside your mouth, and then swallow. please remember to stop for breathing and to stop when the glass is empty". Not saying that very basic questions are bad, but that sometimes they need some work to make them clear to a general audience (e.g. not the asker).

[...] only provides either source or a Mac version.

The second to last line gives a hint that the whole problem was about finding a download link. Since they say: "Only provides either source or a Mac version". Since we do know that the download page also include a link to the binaries, it looks that they just missed it. This would support the original closure as as asking for offsite resources, which was the original point of contention for this meta question.

Is there a simple way? Something like taking installer and install?

The last line makes things look even worse, IMO. Since it makes it look like the user is looking for an alternative installer to use instead of unzipping, which would be seen as not simple enough.

All in all, between a simple misunderstanding to completely unclear to "get me an installer".

At best, I would have addressed the asker in comments to clarify (as the a couple commenters did), and wait until the question looked better to write an answer, if at all. For the looks of it, answering in comments and deleting the question appeared to be a good course of action.

We've all missed things like this. Once pointed in the right direction, you shake your head in self-deprecation, delete the question, and move on.

Regarding the answers: those posted decided to interpret the question as "how to install" with some variance, and go over different aspects of download verification (very good thing to do, and great to mention in answers) and application configuration, while omitting other aspects of it. The answers are not the point of contention (although it's always better to clarify the question being answered, before or after answering, that's not what's being discussed here).

There is even a self-answer (heavily downvoted) where the user basically says how to download the files (!), decompress and execute the first time, glossing over the installation of Java libraries. With even a couple of "ignore this dialog and just click continue" instructions.

This last one could hopefully used to further illuminate the question asker intentions, although the conclusions are not particularly flattering.

The question is very poorly researched and confusingly stated; so it's no surprise different close reasons were chosen by different users. In the end, we all know that it's slightly more important that bad questions are actually closed that they are closed for the exact right reason, though.

I believe that the question is off-topic for being either: unclear, about topics which are not specific to programming (even if being applied to a developer tool it's about downloading and uncompressing a file), opinion based (simple way), or about an external resource (where is the installer).

I asked the question because the official installation instruction was not clear. If you go to the installation link and look through the text you would see "Mac OSX" being mentioned and and no mention of "Windows". How should I know that "from a ZIP Archive" means "for Windows"? You can zip-up Mac version or Java Binaries! I googled around and find "Building from source" tutorial that seemed to be for windows but was not easy.

I answered my question because, that is how I'd like it to be explained for me. I was not happy with the answer. Because it did not emphasise the problems I saw even though it covered a lot.

Apache NetBeans 9.0 is available for download from your closest Apache mirror. For this release no official installers are provided, please just download the binaries and unzip them.

Officially, it is important that you verify the integrity of the downloaded files using the PGP signatures (.asc file) or a hash (.sha1 files). The PGP keys used to sign this release are available here.

The above is literally on the link that the OP provided on the third line of his question. A straightforward instruction on what needs to be done.

And technically, the link with the above instructions is still off-site resource regardless. The OP is basically providing a link and asking SO members to read it and explain it back to him again which is what you end up doing. You just expanded each instruction that was already there on the link.

And both of the above instructions are not even scattered across the page but are mentioned within the same Downloading section itself which, excluding the binaries/source links and the note on Mac OSX, consists of just four lines. As I mentioned above, all you did was expand each instruction that was already there on the link.

The final point that you state regarding concurrently running two versions of Netbeans is the only thing in your question that was actually informative and not on the already provided link honestly.

Just because a question involves something involving programming, does not make it on topic for Stack Overflow. If there was no documentation, official or otherwise, for "how to install NetBeans 9" then both the question and its answers would be useful, but that's not the case.

The question itself is incredibly poor. It shows no research effort, in fact it demonstrates that the asker either did not read or understand the instruction on the NetBeans download page, that is linked to in the question itself that literally tells you what to do right there on the page, plus has a link to a video explaining the process.

Your answer is not much better; it's essentially the same instructions from the the very same download page, reformatted, and with some extra fluff about side-by-side installations and Java paths.

(What's interesting is that the person who asked the question posted a self-answer very similar to yours, so I'm wondering if there's some sort of attempt at rep-farming going on here... although their answer is both late and currently at a hard -5, so if it was an attempt it went horribly wrong.)

Regardless, though, the question boils down to "how do I do this thing that is very clearly explained on the web page" and all answers are going to boil down to "here are the instructions from the same web page".

The question is not high-quality, the answers are never going to be high-quality, and the whole shebang should be nuked from orbit, nuked again, and then nuked a third time just to be certain. If it gets reopened, I'm VTC'ing for all I'm worth.

This is not offtopic "general software question" since related to developers tools. And answer provides interesting content too, not a "recommendation for a tool".

I have voted to reopen it. SO is moderated by us.

Not the answer you're looking for? Browse other questions tagged discussion specific-question close-reasons reopen-closed .

13
Are questions about software tools on-topic?
8
Can I ask questions about installation in SO?
3
Is this a good self-answered question or is there a better approach?
2
Figuring out how to improve a question