Why are new editors discouraged & not given an opportunity to explain/defend?

I attempted to edit the following 'accepted' answer:

... my purpose to editing it, was that as the 'accepted' answer, it's going to be the most viewed answer & as a consequence the fact that it starts with information that's not true (the first line) is not 'accurate/current' (but maybe still valuable for historic reference, hence a strike-through & not a deletion); in addition as a consumer of the answer, the most important part was the update (to now being supported) so I bolded that to make it more accessible, as well as correct two spelling errors (technically one spelling error the first time & two the second edit.)

I am explaining this in more detail here, because in both attempts to make the edits, apparently my abridged/truncated language wasn't significant to have the edit accepted because of the limited field length of an [Edit Summary]; which was frustrating enough.

... really? not even a little bit ... honestly, I don't believe either of them actually took the time to read what I edited nor what I wrote in the [Edit Summary]. I think it would be interesting for the moderators to review @Wizhi & @silwar's edit rejections & see how many times they've used that "canned response". As a new editor who took the time to edit & then try to complete the [Edit Summary] as best as possible, really demoralizing.

I didn't see any way to reply and/or appeal and/or retry, but I certainly wasn't happy with a canned rejection, especially when the canned rejection didn't even seem to apply (especially in hindsight of the two "new" approved edits #5 & #6, discussed below); so I tried again & really tried to explain as best as possible in my new [Edit Summary].

Again, the result was 1 to 2 against. Yaakov Ainspan w 2.5kRep approved; but at least this time I don't believe I received canned answers...

When I saw that I also saw revision #6 by TylerH w 15.3kRep ... this is interesting, it pretty much looks exactly like the changes I made twice that were rejected both times. I mean he did move the word 'Google', capitalized 'Now', and added 2013; but other than that when you combine edits 5 & 6, it pretty much looks like my edit. And had any of the rejectors told me I needed to move the word 'Google', capitalize 'Now', and add 2013 to make my edit not be considered completely superfluous, I would have done that ... but somehow I missed 'seeing what should have been changed'.

So as a new editor, what's my takeaway?... don't make edits until I have a 15kRep because then you don't have to deal with the limited [Edit Summary] field or have your changes be rejected for no reason.

To the admins I ask, with the above information in mind ::

... ironically, I did essentially get my edit, I just didn't get credit for it.

As for your specific edit, I'd say you did a good job of identifying a problem with a post, but not a very good job of fixing it.

Striking through text in a post that's referring to an older version (or content that's less likely to be useful to readers) isn't really appropriate. That's just...not really how edits work. Edits of a post shouldn't make it look like a giant revision list of that post (that's what the actual revision list is for), they should make it look like the post was just written the way it's currently written. If there are updates, you don't stick "Update:" in there, you add the updates.

In this specific case, where there is information about different versions, it's appropriate to mention as if the post was being written that way in an original revision, what the different versions of the product do. So say, "In version Y the Baz Frobs the Foo."

You're also right that the behavior of a 5 year old version isn't the most important information in that answer that most readers are likely to want to see. They're more likely to want to see the current behavior than what it was 5 years ago (even though the behavior 5 years ago will be relevant to some, and so should be included). The solution to that isn't to strike it through, it's to reorder the content. Open with the important information. Include the historical context, or information for people forced into using very old versions, later.

As for the commentary on the actual edit process, and not just this one edit:

Why are new editors discouraged?

Part of the problem here is simply that good editing is hard. Yes, there's lots of useful information out there on good editing (both for English in general, and specific guidelines for our site), but in fact there's so much out there, that people can't read it all. They just start editing. And then they make mistakes, because they didn't read the guidelines. I don't have good solution to this problem. I can only throw my hands up and say that editing is hard and as a result there will be some friction when people start getting into it. That's discouraging for plenty of people.

Another consequence of "editing is hard" is that reviewing is hard. This means both that sometimes reviewers will get it wrong, even when doing their best, and also that it's a lot of work, which means that some people just won't put in the work needed, and also that in order to ensure edits actually get reviewed we can only expect so much work. This is why, for example, you see canned responses for most all rejection reasons. It's just too much work to have reviewers hand writing detailed custom responses (like the top half of this meta post here) for every single rejected edit. There's just not enough time to do it. Edits just wouldn't get reviewed if this was expected of all reviewers. In order to have suggested edits at all, some compromises need to be made.

Why are editors not given an opportunity to explain/defend/correct/update their edits?

You can explain your edit in the revision notes. You can correct/update your edit by submitting future edits. (Although I strongly suggest adjusting your edit to account for the feedback you got on why the edit was rejected before resubmitting.) As for defending it, you can post on meta if you feel that a full blown conversation is needed about a given edit. Yes, there's a bit of friction there. That's because reviewing tons of edits a day is enough work as it is, spending tons of time discussing every edit that gets rejected (if it was made much easier to appeal edits) would potentially end up taking more time than the value added by the good edits. People who feel strongly enough to start a full discussion on the topic can discuss it. This limits the number to a manageable amount, and also ensures that people posting about it really care enough to learn, making it more likely to be worth our time to answer them.

Yes this is a canned comment/reply. Don't feel offended by that. Check the "reject edit" window that you'll see if you keep working on the site. You can add a custom comment only if the edit is harmful, not if in the "no improvement" case. 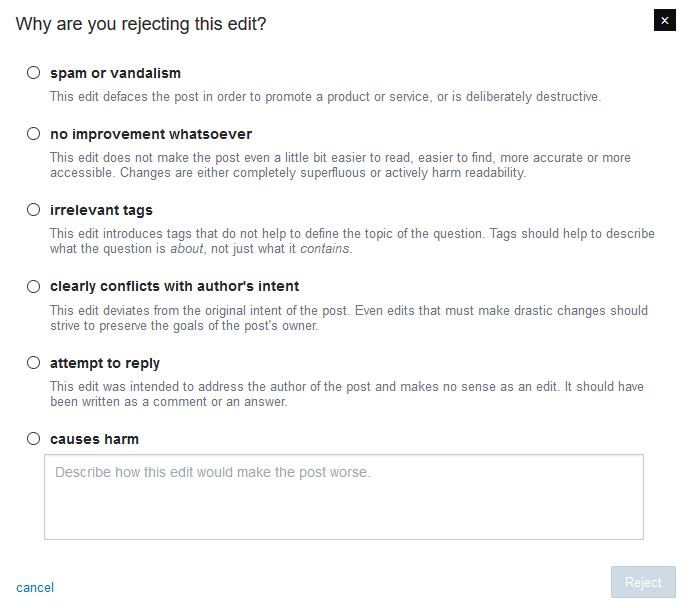 Why are new editors discouraged & not given an opportunity to explain/defend?

You can flag for moderation. But why bothering for one edit? New editors are actually encouraged by 2 rep points. I know people who got 1000 rep just by editing (and edit getting accepted), not a single question or answer. Lots of work, and reward.

Very few sites allow newcomers to change content, so it's normal that there's a review process until you get 2000 rep (when reaching 2000 rep or after 1000 rep gain, the 2 points aren't awarded anymore, BTW)

Also, editing answers is often more difficult than editing questions. Personally I rarely edit answers, I prefer commenting (unless my expertise allows to do so without risking to deface the post). But I edit a lot of questions, and a lot of questions are from newcomers and lack proper formatting, have "thanks in advanced" stuff like that: easy & probably accepted-to-be edits. Try it.

TL;DR: your edit was rejected. Move on, find other posts to edit, there are plenty of them, and hone your skills in the meanwhile.

Not the answer you're looking for? Browse other questions tagged discussion edits rejected-edits new-users .

3
Is a superfluous edit really a reason to reject it?
32
Is the language in this edit rejection too strong?