There seem to be perennial problems with the reputation widget which appears in the upper left of the Stack Overflow page. Yesterday, I earned +75 points on the question Questionmark in SQL Server, yet even more than 24 hours later, this answer does not appear in my achievements list from yesterday: 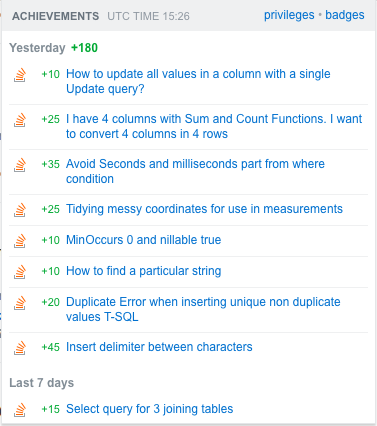 What prompted me to post here was that I thought SO might actually be ignoring the rep from my answer. The score for the day is wrong, and it should be +255. In fact, both the answers list and rep graph from my profile page do show this answer, and the correct daily rep score is being reported there: 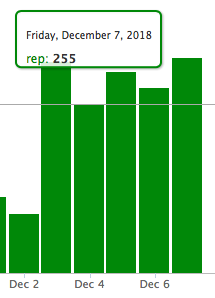 Is there some sort of reporting bug in the achievements drop down which is occasionally causing certain achievements to be ignored?

Side not: I actually did see the upvotes from the answer discussed come into my inbox. But, the answer never appeared, nor did those upvotes "stick" (that is, I saw +10, but nothing beyond this).

6
On a tag page, why does score (not rep) drop 70 points overnight instead of going up by 15?
68
Reputation graph x-axis labels seem off-by-one on profile activity
8
User shown twice under "Top answer scores" of collectives