Why is this question regarding the use of different kinds of HTML tags considered primarily opinion based?

I asked a question about HTML the other day, mainly out of curiosity and also because I felt like it was sort of "missing" from SO and anywhere else I looked. Seems like that feeling is not shared by many since now it got downvoted and put on hold. 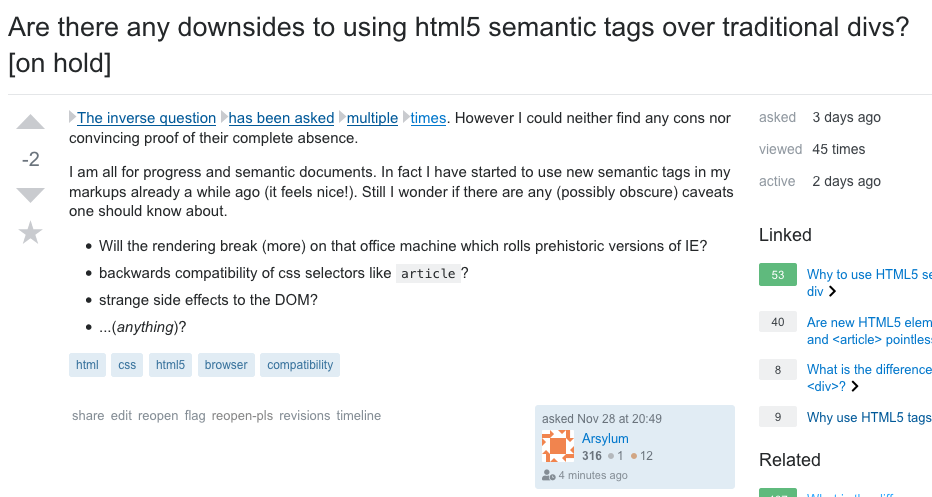 I am confused. After rereading my question I am not sure how it can be misunderstood? Essentially it is "What can happen when you throw new standards on outdated software?" It seems to me like something that is very measurable and objective. Is there some hidden policy here?

That would be a satisfactory answer to your question, given that the answer is and will be constantly evolving with improvements to browser technology.

If you're lucky, it will work with some quirks. Some browsers may decay to using the older div style. If you're unfortunate, your entire site will be broken. It depends on what other variables are out there, such as which browser(s) you're talking about, what operating system and even what rendering engine, which can't be encapsulated simply in a single answer.

You are correct. Your question isn't primarily opinion-based. All of your specific examples:

... are objective hypotheses for which you're seeking verification, they're not opinions. Your question is asking for factual answers. The only issue I can see is, as Makoto points out, that there are possibly too many variables at play.

(In practice, there actually aren't; as the answer you have already received states, older versions of IE simply don't recognize the elements outright, which results in your first two items being true, and in the case of semantic elements that don't provide any additional functionality compared to div... that's pretty much it. But this is in practice. In my experience, questions that are only demonstrably not broad, but still may be in theory, are still grounds for being closed as too broad.)

Two users picked the correct choice of "too broad", but three others picked "primarily opinion-based", which makes this seem like yet another case of users getting the two close reasons mixed up. That's a trend I've noticed for many years now.

Not the answer you're looking for? Browse other questions tagged discussion specific-question on-hold opinion-based .