How to create high quality reproducible examples in Stata

After having spent more than a year answering questions in the stata, it is clear to me that the vast majority of people asking questions here are mostly new or occasional users of Stack Overflow. Such users are more likely to confuse this site with a traditional forum such as Statalist and post unclear or off-topic questions.

The motivation for this question has been the success of similar questions for Pandas and R in providing a one-stop beginner's resource. The examples provided there from experienced users appear to have increased the chance of (new) askers getting answers to their questions.

What is your advice for creating a high quality stata reproducible example?

Simple datasets can be entered with the edit command, which opens the variables editor and allows the user to manually type or paste data.

Programmatically, the input command can also be used:

Are there any additional tips to using input for providing example data? When should one use the trace and pause commands? What other information should be included?

Congratulations on seeking help for your Stata programming problem!

Acknowledging that you need the input of others is the first step towards resolving it and maturing as a Stata user/programmer. Writing a good question is not a trivial task and requires experience. The latter comes with practice, which in turn requires perseverance.

The secret in writing a high quality reproducible Stata question is the successful creation of a sandboxed example. This should use the shortest possible snippet of code and the minimal amount of example data required to replicate your problem.

Stack Overflow's Stata volunteers are always happy to help but they do not spoon-feed. Lack of effort from your part will make it less likely that you get an answer and increase the chance that your Stata question will be closed and ultimately deleted.

Tips for improving your question

You can add this thread in your list of favorite questions by clicking the star ⭐ on the left hand side above. This will allow you to easily access these tips again from your profile's favorites tab.

Before posting a question, please make sure that you have read Getting Started with Stata. You can access these introductory manuals by typing help gs from Stata's command prompt.

There is simply no replacement for acquainting yourself with the basic concepts and syntax of Stata. This is particularly important as effective communication requires you to be able to speak the same language as the other more experienced Stata users on Stack Overflow.

Do not forget that these users want to answer interesting programming problems, rather than act as tutors for teaching the basics. A more general forum such as Statalist or reddit may be more appropriate for problems relating to basic command usage.

Stack Overflow is geared towards solutions for specific programming problems. It is thus important that you explain as clearly as possible your situation and show us what you have tried.

Questions asking how to translate code from other languages to Stata's ado or mata languages are only valid if and only if there is a specific problem to be addressed in the attempted Stata code. Consequently, all the items listed in the previous and next sections are also relevant here.

• Here is a screenshot of my Stata dataset

Please do not upload screenshots!

Screenshots are not as helpful as you hope, primarily because they do not allow people who might answer to copy and paste data into their own Stata and try to reproduce the problem.

In addition to the edit and input commands outlined in the question part of this thread, there are four other ways you can provide example data for your Stata question.

• Stata does not produce the results I want

You should always include the output from Stata in your question. This should be copied and pasted directly from the Stata console. Then select the pasted output and click {} in the question editor. 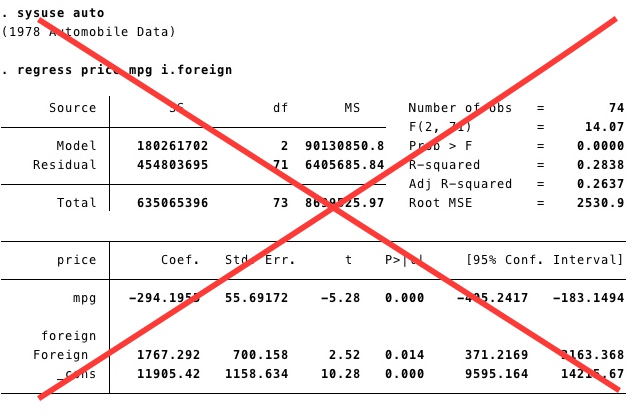 If Stata gets back to you with unexpected results, it is most likely because it was not programmed correctly. Stata simply does what the user instructs it to do.

That said, users on Stack Overflow are not mind-readers. Providing an example of the desired output will greatly increase your chances of getting a helpful response.

If it is a graph, you can post a picture that illustrates the outcome. Otherwise, a table with an adequate amount of expected results is best. This can be generated using an online table creator (such as Table Generator or ASCII Table Generator) and pasted in your question appropriately formatted in code blocks.

The following questions can be considered as good examples of how you should structure your own Stata-related programming question:

It is crucial that you also read the following pages on Stack Overflow:

Finally, you may also find helpful the information on the Statalist FAQ.

22
Are questions about "how to ask" off topic on SO?
39
Should we add an example in how to MCVE?

17
How to handle the 4/5 different unrelated meanings of the [series] tag?
13
A high quality question as a low quality answer
6
High quality answer to another question
24
Where should "How to create a good reproducible example in ...?" questions reside?
1
Disambiguating "in-place", "mutate", the [in-place], [mutate] tags and the R verb dplyr::mutate
1
Low quality posts receiving high reputation