Layout: Make the textarea (edit box) for answers and the preview reflect the final width even before posting

Before an answer being composed is posted, the textarea element (edit box) is wider than the answer that will render once actually posted, because the width that is later taken up by the vote tally (balance of votes) is initially available for editing as well.

(The problem goes away when you subsequently edit an answer.)

Can we make the textarea and preview[11] reflect the actual rendering width up front, even before an answer is posted?

Avoiding the need for horizontal scrolling of code is an important aspect of making it readable.

Not knowing the true width ahead of time makes it hard to gauge whether scrolling will be avoided or not.
This is problematic with long code lines as typically found in shell programming, notably in long PowerShell pipelines. 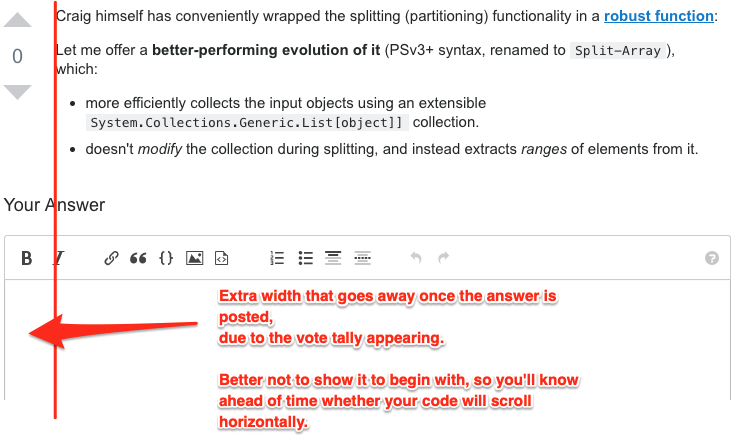 Rendering differences across platforms and browsers:

Screen shots from a 1280 x 800 laptop screen, in a maximized browser window, with default settings (note that the post width only shrinks if you make your window too narrow to accommodate all elements; conversely going beyond that width does not make the posts wider):

[11] What ultimately matters is whether the preview is faithful in terms of rendering width; while the textarea could remain wider, having it differ in width from the associated preview could be confusing / esthetically displeasing, however - I have no strong feelings either way.

55
Has the padding on code blocks been increased?
28
"Accepted" check widens up/down/accepted section enough to sometimes cause code overflow
35
width of answer changes when posted - does that have to be?

155
Require new users to check the preview before posting
2
Broken layout in mobile version of profile page -> activity -> responses caused by profile picture from Facebook?
0
Stack-snippet breaks due to HTML syntax issue
324
Should Stack Overflow revisit the dark mode question in light of new situations in 2019 vs 2013 when it was first asked?