Triage: move 'too broad' item on the first level of "unsalvageable dialog"

Please move "too broad" here, on the first level: 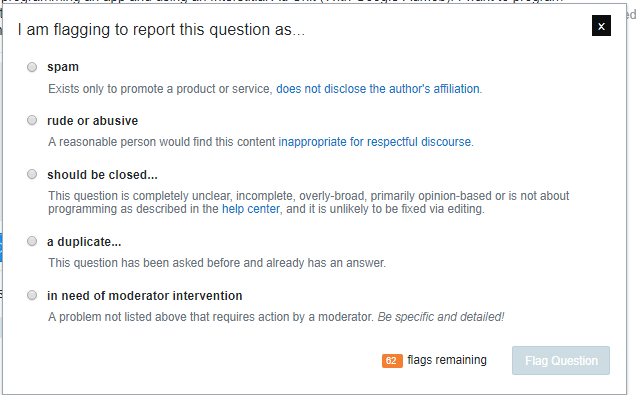 Currently all of those items are less popular then "should be closed" -> "too broad". But "too broad" is somehow on the second level.

P.S. Additionally seldom spam/abusive/moderator choices could be hidden to the separate menu item "offtopic dialog" and be specified on second level.

Perhaps the "Too Broad" flag is much more common than the others, I haven't seen anything showing that to be true, but for the purpose of this answer, I'll just assume you're right about that. In this answer I'm refuting the part of the feature request that «spam/abusive/moderator choices could be hidden to the separate menu item "offtopic dialog" and be specified on second level.»

That flag dialogue may not show the most frequently used flags first, but they are absolutely the most urgent ones.

Spam, abusive, and rude posts, as well as posts that aren't really any of those but otherwise need moderator attention, are posts that need to get taken down as soon as possible. We want to have as few barriers between the first sight of someone spamming or being abusive and that post getting deleted. Thus they need to be among the very first things seen when the flag button is hit, not hidden below another dialogue.

Since those 3 categories take up most of the space, the other flag types need to be grouped by something, and "should be closed" encloses basically everything else. The choice to have the duplicate flag option on the main menu is an interesting one, and perhaps you can make a case that "Duplicate" should be replaced by "Too Broad." As I mentioned at the beginning of this answer, I don't know the usage statistics for those flags, so I couldn't voice an opinion as to that change unless I had more information.

65
I can't mark questions as Unsalvageable in Triage when I'm out of Close votes for the day
5
What to do with too broad questions on triage?
27
Triage queue - Requires Editing vs. Too Broad